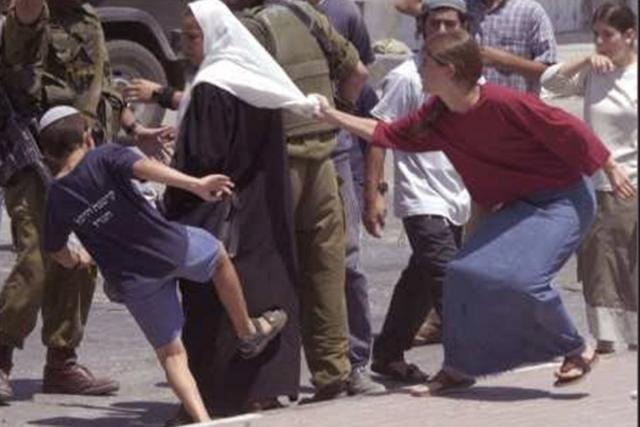 Israel is trying to expel the population of a village for the crime of not being Jewish, the same crime for which Israel bombs the people of Gaza for a month or so every few years and blockades them in between these bursts of violence.

Meanwhile, Mike Huckabee declares that making peace with Iran amounts to marching Israelis “to the door of the oven.”

Guess which of the two stories will get more coverage!

A crime of over 70 years ago, part of a war that in my unscientific estimate forms the single most common theme of U.S. historical fiction — whether print or film — is more important news in the view of U.S. editors than is a crime of right now.

Eve Spangler has just published a wonderfully well documented book that should be the text for universal history classes, called Understanding Israel/Palestine: Race, Nation, and Human Rights in the Conflict. Spangler, the U.S. child of two holocaust survivors, was a college professor before she had the slightest idea what had happened in Palestine during the twentieth century. When she found out, she went all-in and found out as much as could be known.

Spangler takes students to Israel/Palestine every year. When visiting the Arab market in Hebron, she learned that the heavy metal mesh screen overhead was hung there to protect shoppers from bricks and chairs thrown down from balconies by Israeli settlers. However, Spangler was struck with the contents of one of the objects settlers had learned could penetrate the screen: a plastic bag of human excrement. Israeli settlers behave like prisoners gone mad from confinement even as they steal the land and homes of non-Jewish people with impunity.

How can this be? What went wrong?

“Clearly, the aspiration to creating a ‘new man,'” Spangler writes, “defined by a hyper-masculine ethos of physical and military strength and by ‘clean and pure blood’ (and a ‘new woman’ defined by fecundity) had echoes of fascist ideology and profoundly racist implications. Consider, for example, the iconic photo of an Israeli soldier gazing reverently at the Western Wall on the day that the Israeli army conquered East Jerusalem in 1967. He is startlingly Aryan in appearance. Nor did the preference for blondes end in 1967. Recently social workers told an Israeli friend of mine who is waiting to adopt a baby, that her family could have a ‘defective’ baby immediately, but would have to wait about a year for a ‘normal’ baby or up to five years if they insisted on having a blond, blue-eyed child. ‘Defective’ children, this family discovered, were dark-skinned.”

Two years after the liberation of the concentration camps in Europe, Jewish militias besieging the town of Beisan (Bet She’an), Spangler notes, “required some Arabs to don yellow armbands, and marked Arab stores with yellow decals, targeting them for looting.” Spangler, whose book covers many subtopics other than the one I’m focusing on, is infinitely careful to stress the obvious, namely that similarities are not exact equivalencies. Her point in noting the similarities is, I think, clearly and legitimately enough to expose the imperfect yet startling mimicry and the motivation of misdirected revenge in the basic policies of the Israeli government from that day to this toward the people who lived in the “uninhabited” land.

Lillian Rosengarten’s forthcoming Survival and Conscience: From the Shadows of Nazi Germany to the Jewish Boat to Gaza is an account by a Jewish woman who fled Nazi Germany for the United States as a little girl with her parents. “Nationalism revisited,” she writes, “is now twisted into a parody of the Nazi credo, ‘Deutschland über alles,’ extolling Germany over all others with only pure Germans as inhabitants. Get rid of the undesirables who are beneath contempt. I must not make such a comparison, you say. Yet I must, for I fear a Jewish State that belongs only to Jews is a dangerous road. I must question the profound psychological impairment suffered and internalized by generations of Jews that follows the Nazi Holocaust. The cycle of paranoia and abuse is playing out its destructive course: this is how I understand Palestinians as the last victims of the Holocaust.”

I would question only how Rosengarten can see into the future and find the last victims of the influence of Nazism. After World War II, the military of the United States — which, of course, arms the Israeli military free of charge while whining about how it can’t afford luxuries like schools, housing, and bridges that don’t collapse — hired sixteen hundred former Nazi scientists and doctors, including some of Adolf Hitler’s closest collaborators, including men responsible for murder, slavery, and human experimentation, including men convicted of war crimes, men acquitted of war crimes, and men who never stood trial. Some of the Nazis tried at Nuremberg had already been working for the U.S. in either Germany or the U.S. prior to the trials. Some were protected from their past by the U.S. government for years, as they lived and worked in Boston Harbor, Long Island, Maryland, Ohio, Texas, Alabama, and elsewhere, or were flown by the U.S. government to Argentina to protect them from prosecution. To observe and note the Nazification of the U.S. military is neither to absolve the U.S. military of its pre-WWII crimes nor to pass blame off to the Nazis instead of blaming U.S. officials of later generations for their own actions. Blame is not a limited quantity.

I don’t think we can dismiss Huckabee’s comments about ovens as simply a bid to be dumber than Donald Trump and win the pro-stupidity vote in the Republican primaries. Transforming Iran from devil to negotiation partner victimizes Israel precisely by stripping Israel of some of its victim-status. Without the status of eternally current victim of the fantasized reenactment of long-past crimes, Israel has to be viewed through a filter of actual facts. Were Jews victimized by Germany? Of course! Did Palestinians deserve to suffer for it? Of course not! Did Iran have anything to do with it? Of course not! Would I support pulling all the U.S. military bases out of Germany and turning all of their land over to Jewish settlers? Sure!

Photo above is from MiddleEastMonitor.