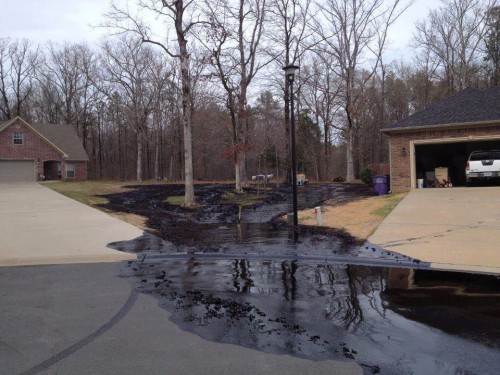 Governor Terry McAuliffe of Virginia campaigned on green energy (and I hear some people may have believed him, though I haven’t met one) and then immediately backed the proposed construction of a giant fracked-gas pipeline through the mountains and farms of Virginia to carry fossil fuels from West Virginia to North Carolina.

Dominion Virginia Power paid $1.3 million this year in legal bribes to candidates’ election campaigns, more than anyone else in Virginia except the two Parties. Every single bill Dominion opposed in the legislature died. Dominion, according to the dictionary, is “the power or right of governing and controlling; sovereign authority; rule; control; domination.”

In Virginia it’s easy to think of the evictions of the poor farmers 80 years ago to create Shenandoah National Park as something ancient that civilization has outgrown and would never do again. (And the old lyrics of the song Shenandoah, about giving the Native American chief liquor in order to steal his daughter, are not celebrated in this day and age.) But at least the injustice of the 1930s evictions created a park. At least there was some sort of public interest involved.

Now here comes the Virginia government as the bought-and-paid-for servants of their corporate masters at Dominion to claim a 40-yard-wide path of destruction and potential catastrophe right through the middle of numerous private properties and public properties for the sake of escalating the collapse of a livable climate on the planet, not to mention facilitating the destruction in West Virginia where the fracking frackers will do their fracking. What’s the public interest to justify it? It’s going to ruin parks and not create any.

A good short documentary on the growing resistance, called Won’t Pipe Down, shows the owner of Silverback Distillery explaining that he supported the Keystone Pipeline but opposes this one because it impacts his own personal private property and his business. The correct response to that attitude is not “Serves you right,” but “Glad you’re now with us.” Because NIMBYism keeps getting the proposed path of the pipeline moved, and if those who succeed in moving it stick with the struggle to keep it from getting built at all, perhaps it can be prevented entirely.

The pipeline is also proposed to cut right through a communal farm property, where an existing sense of community may aid the movement.

In fact the movement is doing well. Check out FriendsofNelson.com. There are big protests. Driving through Nelson County, or even through Charlottesville, one sees lots of “No Pipeline” signs. Some 69% of Nelson County landowners in the proposed path have refused to allow surveys on their land.

The U.S. government fights wars for oil and gas, for godsake. It bombs people’s homes for this stuff. If we only protest when our own personal property is impacted disproportionately, we’re going to see the climate severely impact each and every piece of private property on earth. This pipeline needs to be opposed by everyone in the area and everyone in the world. Help out, won’t you? FriendsofNelson.com and AugustaCountyAlliance.org

Oh, and here’s my idea for where to stick the thing if it can’t be stopped. Governor McAuliffe is living in public housing in Richmond, Va., and I suspect that Thomas F. Farrell II is able with his personal $12 million per year from Virginians’ utility bills, to afford some sort of residence in that area. McAuliffe must bow before the $2500 Farrell gave him for his campaign, even knowing that Farrell gave his opponent $5000. Why not build a pipeline from the sewer beneath each of these two gentlemen’s houses, connecting them, and let the question of which produces more filth, the public or private realm, finally be answered when we see which house’s plumbing backs up first?

“We Don’t Want Your Pipeline” By Robin and Linda Williams from Richard Adams on Vimeo.

Image above shows the results of building a leaking pipeline in another state, what Virginians can look forward to if the ACP is built.