I realize that, living here in the United States, the nation doing the most in the world to create wars, proliferate nukes, and destroy the habitability of the earth’s climate, I really have a duty to pick someone in the United States as the worst individual human being alive. 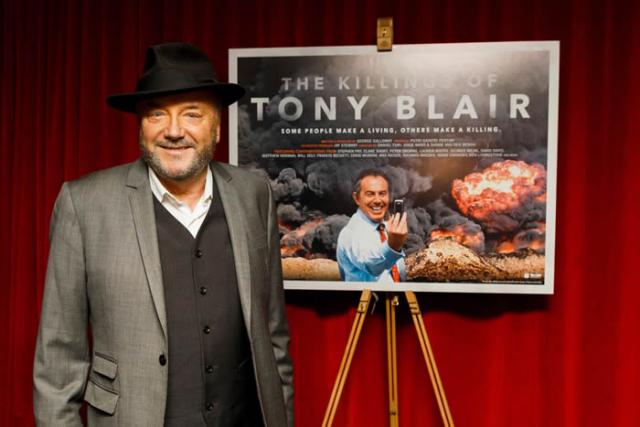 But the United States operates by incestuous swarm. We have another Cheney running for Congress and another Clinton running for president. We have Trump’s campaign manager in trouble for taking money from Russians, much of which he funneled to Hillary Clinton’s campaign chair’s brother. Meanwhile, Trump’s daughter has been hauled before a virtual Un-American Activities Committee for vacationing with the supposed girlfriend of Vladimir Putin who may or may not have cheated on Rupert Murdoch with Tony Blair — Yes, the same Rupert Murdoch who raises funds for Hillary Clinton, and yes, that Tony Blair — the one whose corrupt deal with Murdoch put him in power in the first place.

These characters, including Blair, are at least honorary Americans. But Blair is something even worse than the worst of the worst of them. Blair did to the Labour Party what Bill Clinton did to the Democratic Party — what Jeremy Corbin is trying to undo and Hillary Clinton trying to permanently entomb. Blair did to Kosovo and Afghanistan and Iraq what Clinton, Bush, and Obama did to those places. But while Bush went home to paint pictures of himself in the bathtub, Blair went on a Clintonite mission to get rich and evangelize for war and corruption.

I don’t know if it’s fair to hold this against him, but Blair took into wars on Kosovo, Afghanistan, and Iraq, a nation with far greater resistance to such lawless mass killing than the United States had. That is, he had people telling him openly that his actions would be criminal and reprehensible. He may now be the least popular person in Britain. He can’t go outside without being protested. George W. Bush, like his daddy, in contrast, is just another respectable old retired emperor.

I do think, however, that it is perfectly fair to hold against Blair the fact that he shifted from mass killing straight into mass money making while promoting more death and destruction. Money grubbing British prime ministers from now on will know that they can become stinking rich upon retirement if they do the bidding of their corporate and foreign overlords while in office.

If you think I’m exaggerating, go watch George Galloway’s new film, The Killing$ Of Tony Blair. This film tells the story of Blair’s whole career, and it’s ugly. He cuts a deal with Murdoch to allow media monopolies in exchange for press support. He takes money from a car racing plutocrat in exchange for allowing tobacco ads at car races. He sells out to corporations left and right. He peddles BAE jets to Indonesia for killing people in East Timor. He sells BAE air traffic control systems to Tanzania which has no air force. He simply shuts down a prosecutorial investigation of BAE’s Saudi corruption in the deal that saw Bandar Bush pocket $2 billion. He privatizes schools and hospitals, anything that can make a buck for anybody who knows how to kick some back.

Blair joins with Clinton the First and then Obama in the killing in Kosovo, Afghanistan, and Iraq, and then shifts into former-prime-minister-now-“consultant” mode, taking millions from JP Morgan Chase, Petro Saudi, and other companies for providing his connections to other corrupt people around the world. He takes obscene speaking fees. He hires himself out to dictators in Kazakhstan, Egypt, Kuwait, and Libya. The film juxtaposes their atrocities with Blair’s purchased praise of their many merits. Blair persuaded Bush to protect Gadaffi from lawsuits by alleged victims, but apparently forgot to tell Hillary not to bomb Gadaffi or get him killed.

What really wins Blair the prize of worst person on earth, though, is his acceptance of an appointment as Middle East Peace Envoy to Israel and Palestine, a job he apparently held right up until enough people realized it wasn’t a fake report meant to be funny but an actual no-kidding job that he was actually engaged in.