For years and years, activists demanded that the U.S. government make public 28 (turned out to be 29) pages it had censored from a report, because it was suspected they would show a Saudi Arabian role in funding and facilitating the crimes of September 11, 2001. When the pages were finally made public, they showed a great deal of evidence of exactly that. But the U.S. government and its pet media outlets buried the story on a Friday evening, declared that verily this is that, and moved on.

If you happen to have caught wind of this and smelled a rat, you’ll be interested in another 203 pages, those making up Medea Benjamin’s new book, Kingdom of the Unjust. If you live in the United States, you should be aware of how much effort your government puts into facilitating and defending the crimes of Saudi Arabia in the United States, in Saudi Arabia, and in places like Bahrain, Yemen, Syria, Nigeria, etc. If you pay U.S. taxes, you should know what you’re buying. If you work for a U.S. weapons maker, you should know who’s buying what you make, and what they’re using it for. If you drive a car, you may be helping to destroy the earth’s climate while funding the Saudi royalty.

The Saudi royals keep millions poor while blowing fortunes. They send religion police around to beat the hell out of people, while they themselves party with alcohol, cocaine, prostitutes, and gambling. Like many a televangelist closer to home, they don’t believe their own bull, but they use it to abuse the people of Saudi Arabia and elsewhere. The religious police don’t just want you to be religious. In fact most religions are banned and you can be imprisoned, tortured, mutilated, or beheaded for being a follower of them. And they don’t just want you to be a fundamentalist Muslim of the proper variety. They want puritanical misogynist conformity — or death. They beat a man to death for possessing alcohol, locked up a woman for riding alone in a taxi, and killed 15 girls by refusing to allow them to flee a burning building because they were not wearing their abayas, garments to completely hide their bodies.

With U.S. support, Saudi Arabia manages to be both the only nation that bans all churches and any non-Muslim religious building, and the leading proponent of global terrorism. Saudi Arabia actually bans Jews from entering the country [or did until 2004 and now claims to let in non-Israeli Jews with no Israeli stamp on their passport], perhaps inspiring Donald Trump’s plan to ban Muslims from entering the United States, while still creating at least an inconvenience for U.S. humanitarian warriors who are constantly wanting to bomb new countries in order to supposedly avoid a repeat of the holocaust — even while urging Saudi Arabia to spend more on wars (as Trump and Bernie Sanders and President Barack Obama have done most prominently). In fact, Saudi Arabia spends three times as much per person as the U.S. does on its military, and it spends the biggest chunk of it buying weapons from U.S. profiteers.

An “indefinite waiver” upheld by Presidents George W. Bush and Barack Obama lets Saudi Arabia off the hook in the U.S. State Department for its religious cruelty. Waivers by Bush and Obama also allow the U.S. military to go on training the Saudi military. A waiver created by Secretary of State Hillary Clinton allows U.S. weapons sales. Clinton made that her personal mission after Saudi Arabia put at least $10 million into the Clinton Foundation. As the U.S. State Department was and is well aware, there are no civil liberties in Saudi Arabia. People are jailed, whipped, and killed for speech, and speech is tightly censored. Saudi Arabia didn’t even ban slavery until 1962 and maintains a labor system referred to as “a culture of slavery.” The “sharia law” that U.S. bigots are constantly fearing will appear in their town actually takes a truly nasty form in Saudi Arabia under a brutal government propped up by U.S. funds and arms. 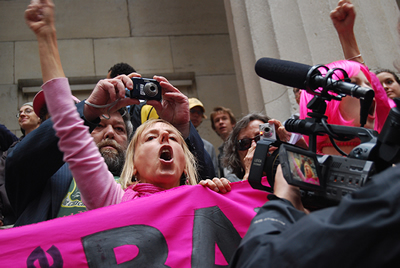 MEDEA BENJAMIN AT A RALLY

Saudi Arabia doesn’t put its own atrocities on Youtube the way ISIS does, and doing so is a tremendous risk for ordinary people in Saudi Arabia. Nonetheless it is starting, and there are outrages you can watch if you are so inclined.

Saudi Arabia has yet to become a target of the Clintonite cabal of philanthropic warriors claiming to overthrow governments for women’s rights, yet Saudi Arabia practices gender apartheid, with women forbidden most of the rights of men, women controlled by men utterly, women’s testimony in court sometimes valued at half the worth of men’s, and a woman’s reporting of an attack by a man is considered to be a crime by the woman. You don’t see Saudi women at the Olympics because they are forbidden to wear the attire required for the competitions. [In 2012 two Saudi women living outside Saudi Arabia were allowed to compete.] Saudi restaurants have front and back sections, with the front for men only.  Saudi Arabia lives off fueling cars, yet is the only country in the world where women are forbidden to drive.

Are Saudi’s made happy by their sadistic society? There are many indications otherwise, including emigration, travel, courageous protest, and including this: men who practice polygamy in Saudi Arabia are four times more likely to have heart disease.

Happy or not, Saudis have been proficient at exporting their madness. Hollywood could take lessons (and has helped out). Saudi schools have helped to create branches of Al Qaeda and other extremist groups across Western Asia and Northern Africa at least since the joint U.S.-Saudi operation in Afghanistan that created the Taliban, not to mention the Saudi role in Iran-Contra, but also including Boko Haram in Nigeria, and including in Europe. The terrorists who attacked in Paris last year and in Belgium this year came from an area in Belgium with strong Saudi influence. In 2014 the Saudi Interior Ministry conservatively estimated 1,200 Saudis had gone to Syria to join ISIS. A 2014 study by the Washington Institute found that private Saudi donations were critical to the growth of ISIS.

Then-Secretary of State Hillary Clinton said in a 2009 cable (thank you, WikiLeaks), “Donors in Saudi Arabia constitute the most significant source of funding to Sunni terrorist groups worldwide. . . . More needs to be done. . . .” So, what did Clinton do? Sold Saudi Arabia more weapons, of course! Saudi Arabia is now the biggest weapons customer for the United States, and therefore for anyone. That includes about $100 billion in U.S. weapons sales under the Obama regime, with more pending. Benjamin quotes Obama officials who have praised these sales as a means of creating jobs. This is of course despite the fact that peaceful spending creates more jobs, and the fact that the weapons create something else as well: death.

When Tunisia overthrew a dictatorship without a war in 2011, Saudi’s royal thugs got excited. They offered refuge to the Tunisian ruler. They sent funds to Jordan and Morocco to prop up their brutal governments. They backed a military coup in Egypt. They smashed a nonviolent popular uprising in Bahrain with murder, torture, and imprisonment — still underway. And, of course, they started bombing Yemen, once U.S. drone killings had done their damage and helped to destabilize that country. In fact, U.S. drones flying over Yemen take off from a U.S. base in Saudi Arabia, something Obama created after Bush pulled U.S. troops out of Saudi Arabia and closed the bases — a move motivated by the crimes of 9/11 and the explicit and widely available answer to the stupid lament “Why do they hate us?” They said what they hated: the U.S. bases that Bush The First had put in Saudi Arabia. And Saudi Arabia had refused to kick them out when bin Laden demanded it because the Saudi government depends on the United States to maintain its unjust existence.

Obama, who recreated this fuel for violence, and who claims to be outraged by Saudi Arabia’s atrocities, claims to back Saudi Arabia for the cause of “stability.” “Sometimes,” says Obama, “we have to balance our need to speak to them about human rights issues with immediate concerns that we have in terms of countering terrorism or dealing with regional stability.” Yet Saudi Arabia is possibly the biggest cause (outside of the United States itself) of instability in its region, al Qaeda and ISIS are wreaking havoc within Saudi Arabia, and the Saudi government itself is about as stable as a cork in a volcano. To Obama’s credit, he hardly ever means anything he says, and in fact he has backed down on holding Saudi Arabia to account when the Saudis have threatened to pull investments out of the United States, not when they have somehow appeared to be a source of stability and safety.

Still, some would take offense when a foreign government and its elites backed terrorism in your country (on 9/11) and then threatened to hurt you financially if you even said anything about it. But why doesn’t anyone say anything about it? In 2015, according to The Hill, the Saudis employed eight DC lobbying firms including the Podesta Group, run by top Hillary Clinton fundraiser Tony Podesta, and cofounded by Clinton campaign chair John Podesta. Saudi Arabia dumps money into U.S. “think tanks” that would be forbidden to exist in Saudi Arabia, and other institutions including the Middle East Institute, Harvard, Yale, the Clinton Foundation, the Carter Center, etc.

For a further 275 Saudi Pages try Robert Vitalis’s America’s Kingdom: Mythmaking on the Saudi Oil Frontier. But start with Medea Benjamin’s 203, which even includes some thoughts on what can be done moving forward. Saudi Arabia’s oil, plus all the fossil fuels from everywhere else, is going to make Saudi Arabia uninhabitable long before much of the United States becomes so. Really looking forward, I think, means looking at the future of over 30 million refugees and our capacity to understand the society they are fleeing, our own role in creating it, and our responsibility to welcome them.