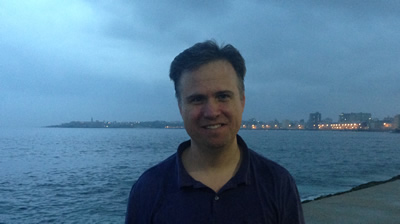 We arrived in Havana tonight, February 8, 2015, or year 56 of the revolution, 150 of us filling an entire airplane, a group of U.S. peace and justice activists organized by CODEPINK. The place is hot and beautiful despite the rain.

The buildings, the cars, the sidewalks look as if time stopped in 1959. The tour guide on the bus from the airport to the hotel brags that the municipality around the airport has a psychiatric hospital and a spaghetti factory. Both the billboards and the tour guide fit Fidel into most every topic.

Back home en el Norte we often note that they don’t build things like they used to. My own house predates the Cuban revolution. Prioritizing human needs over “growth” and gentrification is certainly something I would retroactively choose if I could.

But did Cuba choose to stop time on purpose? Or to stop it in certain ways? Or is it something one is not supposed to say or think? We’ll be meeting with many Cubans in the coming week, those the government perhaps wants us to meet and those it perhaps doesn’t.

Who’s to blame and credit for the bad and good in Cuba? I don’t yet know and am not sure how much I care. By one argument the U.S. sanctions have been disastrous. By another they’ve had no effect. By no argument does there seem to be any reason to continue them. Or course those claiming they’ve done no harm often suggest that Cuba should not be rewarded by lifting them. But incoherent nonsense is hard to respond to. 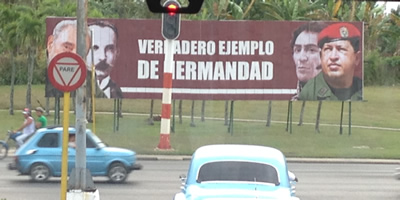 The United States waged a long terrorist war against Cuba but keeps Cuba on its terrorist list. That has to end regardless of whether Cuba has found the way to a sustainable democratic future.

An American in a hotel elevator said to me: “Shouldn’t the people whose property was seized in the revolution have it restored to them?” I happen to know that at least some of them don’t want it restored, but I replied, “Sure, that’s worth considering, as is the United States giving Guantanamo back to Cuba.” Without missing a beat, this Good American came back at me with a line he’d clearly used before: “Will you give me your car, then?” Once I’d figure out what he was saying, I pointed out that I hadn’t stolen his car at gunpoint as the United States stole Guantanamo. He walked away.

I realize that carried to an extreme I’d have to ask the United States to give back the entire United States, but I’m not carrying it to that extreme. Why can’t the U.S. give back Cuba’s land and Cuba reform its worst political practices? Every government in the world needs to be reformed, and urging changes on one hardly endorses every action of the other 199.

The streets of Havana are dark at night, lit just enough to see and no more, but with no sense of danger, no sense of racial segregation, no threat of violence, no homeless people as one inevitably encounters in the land of capitalistic success. The bands play Guantanamera for what must be the gazillionth time, and play it like they mean it. 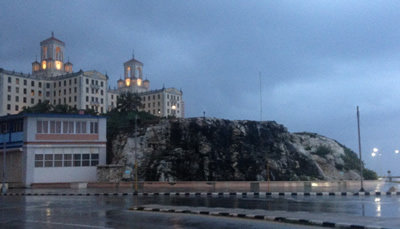 Taken all in all, and having just arrived, it’s not a bad place to be cut off from the world. I have yet to find a SIM card or a phone. My hotel has no internet, at least not until mañana. The Hotel Nacional — that of the Godfather movie — tells me they have internet only in the day time. But the Havana Libre, formerly Havana Hilton, has live music, electric outlets with three holes, and slow but functioning internet (superior to Amtrak’s) for 10 pesos an hour, not to mention mojitos.