CNN’s latest lie that Hillary Clinton has won a presidential primary reads like this:

“Sanders needs more delegates to win than are available in the remaining contests, meaning he would need supredelegates to support him in order to win the nomination.”

At the same time, CNN is claiming this: 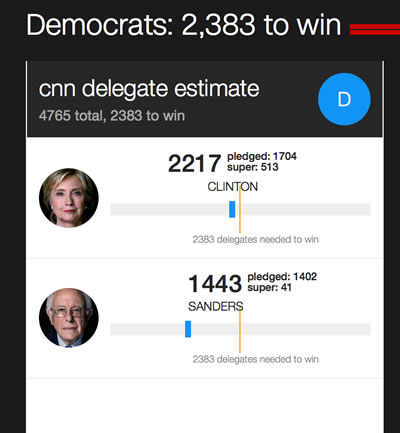 Looking at remaining state primaries on CNN’s own site, we can see 926 delegates remaining to be won.

If Sanders were to win 615 or more of those, he would not reach 2383 but he would win more “pledged” delegates than Hillary Clinton.

Then if “super” delegates followed the majority of actually voted for delegates or followed their own states or went with the more corrupt candidate or whatever they did, they would decide it, either for Sanders, the actual winner, or for Clinton the actual loser. Either way, either Clinton or Sanders would “need supredelegates to support them in order to win the nomination.”

CNN builds superdelegates into its 2217 to 1443 pretense above, in a manner it did not do in previous elections. But it also builds them into its claim about whether Sanders can still win. CNN has no doubt been drooling over the moment at which it could claim there aren’t enough delegates left for Sanders to win. But it has to define “win” as “cheat” in order to believe that moment has arrived.

In fact, if Sanders wins more than 247 of the remaining 926, which is virtually guaranteed, but falls short of winning 615 of them, it will still be the case that either he or Clinton needs “super” delegates in order to reach 2383.