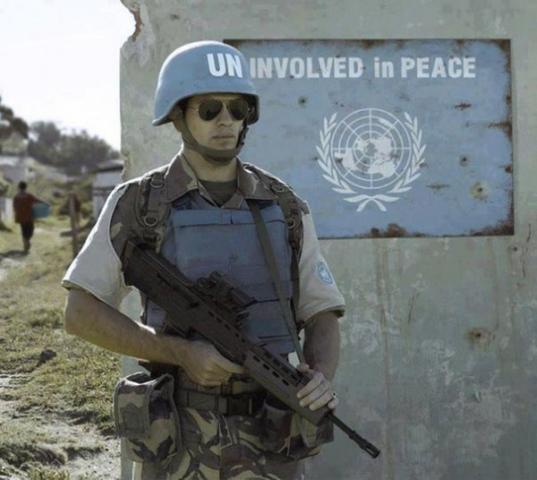 In 2004, the United States, which had previously occupied Haiti from 1915 to 1934, kidnapped the president of Haiti, overthrew his government, and sent in United Nations “peace keepers.” In 2010, an outbreak of cholera hit Haiti for the first time ever. The disease had previously been unknown in the country.

The UN had sent in soldiers from Nepal where cholera had just broken out. It hadn’t tested the soldiers for the disease. At the soldiers’ camp in Haiti, a truck picked up their fecal waste on October 17, 2010, and drove it to a hilltop septic pit overlooking a river. The pit was already full and overflowing. The driver’s boss told him to dump his load anywhere. So he dumped it into the river.

Downriver, people started dying of cholera. An outbreak would spread rapidly. Thousands (and still rising) would perish. The “international community,” with its benevolent military takeovers, had literally shat on the health of the Haitian people.

Next it proceeded to make matters worse. The United Nations, international diplomats, hired scientists, the New York Times, National Public Radio, the Lancet, and the respectable humanitarian NGO complex in general spent years covering up and lying about what had happened.

Because the armed occupying army of “peace keepers” was widely resented as an armed occupying army, many were concerned, or professed to be concerned, that honestly stating what had begun the cholera outbreak would lead to an outbreak of violence. In fact, the refusal to state what had happened led to the lynching of dozens of practitioners of voodoo who were scapegoated. And false claims about what had caused the outbreak led to misdirected resources in the struggle to eliminate the disease — and in fact to the false belief that the disease could not be eliminated as it supposedly lay lurking in the environment ready to emerge in any natural disaster.

Avoiding the blame it deserved, the United Nations was happy to blame Haiti and to suggest that poor countries lacking in modern services simply must deal with disease outbreaks eternally. Meanwhile, smaller, better targeted steps, at relatively limited cost, could have eliminated cholera from Haiti as this nasty, deadly disease has been eliminated from other places — and those steps still could eliminate cholera from Haiti this year.

Ralph Frerichs’ new book is called Deadly River: Cholera and Cover-Up in Post-Earthquake Haiti. The author cites a $2.2 billion ten-year plan that could eliminate cholera and improve water and sanitation. That’s 0.00002% or so of U.S. military spending. Can it possibly be spared? Dare we cancel half a weapons system, tax a few corporations, or divert some of Hillary Clinton’s speaking fees? Apparently not.

Frerichs’ book is largely the story of French doctor Renaud Piarroux’s efforts to uncover the truth of what happened in Haiti. It’s a story of bureaucratic coverup and deception undone by science and journalism. It’s a story of supposedly benevolent Western agencies and authorities declaring it unimportant how a disease outbreak began, in a manner that they never would have attempted in the United States or Europe. The New York Times actually denounced “the feverish urge to blame,” even though finding the source of a disease is generally considered essential to halting its spread.

Western NGOs proved better in this case and others at helping out during a crisis than at ending it. They began pushing the idea that Haiti would simply have to control cholera as well as it could from here to eternity, a claim that Piarroux had heard before in Comoros, Madagascar, Senegal, Ivory Coast, and Guinea. Even years later, NPR was airing a folksy liberal newsy-ish story on the views of a discredited scientist exonerating the UN of all blame for cholera in Haiti. And with years gone by, attention and available funding had moved on to other disasters around the globe.

Past cholera pandemics have often followed armies. The UN sends more armies to more places than anyone other than the United States. That has to stop. Not because the cholera contamination was intentional, not because a secret world government run by black helicopters is planning to destroy apple pie or Christianity, but because countries are better off without their governments overthrown, doctors are better assistance than soldiers, unaccountable bureaucracies often do more harm than good, and peace is not going to be found at the end of a thousand guns.

Here’s Chelsea Clinton in early 2010 as Haiti dealt with an earthquake and had yet to be hit with cholera: “The incompetence is mind numbing. The UN people I encountered were frequently out of touch … anachronistic in their thinking at best and arrogant and incompetent at worst. There is NO accountability in the UN system or international humanitarian system.” But the focus of U.S. Secretary of State Hillary Clinton, according to her emails, was on public relations, specifically on countering all negative accounts of U.S. involvement in Haiti. She had just supported another coup in Honduras, and later that year U.S. diplomats would clamp down on efforts to honestly report what had brought cholera to Haitian shores.

If Haiti had the same vote at the United Nations that the United States does, this would not have happened. If democracy were a serious worldview rather than a fund-generating slogan, this would not have happened. The Catholic Church of all ancient bloated bureaucracies is considering dropping “just war” sophistry after 1,700 years. How many years will it be before the United Nations tries nonviolence, democracy, independence from the five war powers, and respect for human life?