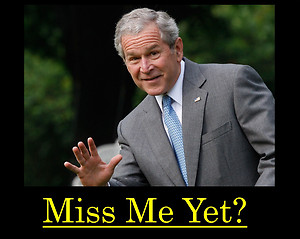 When George W. Bush made the case for attacking and destroying the nation of Iraq, he made claims that, if true, would have justified nothing. And he proposed as evidence for those claims fraudulent, implausible, and even ridiculous pieces of information. But he was expected to produce evidence. There was no assumption that he should simply be taken on faith.

Those standards are gone.

The common wisdom that Vladimir Putin hacked into Democratic and Republican emails and fed the Democratic ones to WikiLeaks which delegitimized an otherwise legitimate election, is not based on any public evidence, and none is asked for by most believers.

The premise that possessing weapons justifies being attacked was patently absurd in 2003. The U.S. openly possessed all the weapons it claimed Iraq had. The premise that (further) exposing a rigged primary harms, rather than facilitating, election integrity, is strictly nuts in 2016. WikiLeaks and any source(s) deserve our thanks.

But the standard of evidence has been altered. It’s certainly possible the Russian government hacked the emails. It’s even possible that Russia was the source for WikiLeaks, and that Julian Assange and Craig Murray are deluded or lying, that Bill Binney is mistaken, and that all the anomalies in the claims of Russian hacking can be explained away. But the expectation that some sort of evidence should be produced no longer exists.

One reason for this is that during the Obama years wars were launched without public debates and marketing campaigns. Continuing and escalating the war on Afghanistan was simply done, without discussion. Continuing war on Iraq — which still continues — was done without requiring any of the pretenses used to escalate it in 2003. Launching hundreds of mini-wars in the form of drone murders took public debate out of the picture by definition, just as the presidential possession of a nuclear button has aided the decades-long re-imagining of Congress as a group of court jesters.

When Obama has made unproven and implausible claims about looming massacres in Libya or Iraq, or chemical weapons use in Syria, or airplanes shot down in Ukraine, or coups in Ukraine, or “moderate” terrorists, or Iranian nukes, or drone war success in Yemen, or the nature or legality of drone murders, there has been no general request for evidence. Even with the claims about Syrian chemical weapons in 2013, the public and Congress said no to escalating the war in a visible manner, but did not focus on demanding evidence for claims.

This thinking is not necessarily conscious and explicit. Those intent on taking the CIA on faith remain proud of considering the evidence of climate change. But when you combine anti-Trump with pro-Hillary plus xenophobia plus the demonization of Putin, some people lose all perspective. And when the past 13 years have been spent eroding the idea that a public case against a foreign target should include evidence, the sale is made quite easily.

So, yes, I miss the days of Dubya. I miss the days when the U.S. government pretended not to torture. The President “Elect” now promises to torture. Why? Because President Obama forbade prosecution of the crime of torture, allowed torture to continue, outsourced much of it, and replaced a lot of the torture program with a new murder program (using drones). And because the U.S. media pretended that torture had been legal under Bush and was somehow made illegal by an Obama “executive order,” which is not a law.

I miss the days when lawless prisons like Guantanamo that kept people imprisoned without charge or conviction were deemed shameful and worthy of abolition. These Obama supposedly legalized with another “executive order.” Now Trump says he’ll pack the prisons.

I miss the days when unconstitutional mass surveillance, or mass deportations, or the rewriting of laws by presidents was illicit and scandalous. Now these things are generally accepted. So here’s my question to good liberal Americans:

How is not impeaching Bush working out for you?

The point of impeaching and removing Bush would not have been to make Dick Cheney president, any more than the point of studying history is that your school has assigned that class to the football coach.

Why can basketball announcers grasp that Duke’s Allen Grayson might not be tripping opponents this year if he’d been suspended for a game or two when he did it last year, but political analysts can’t grasp that if Bush had been impeached, or even an effort made to impeach him, we might not now — like India — have a twitter-loving right-wing nationalist preparing to create Muslim registries and enforced flag worship?

So, here’s an idea. We can’t go back in time. But we can start now. Trump is going to violate the Constitutional bans on domestic and foreign presents and “emoluments” on day one, and likely begin piling up original as well as familiar impeachable offenses during his first week.

But just as the only conceivable way to get Trump into office was to nominate Hillary Clinton, the surest way to derail an impeachment campaign against Trump will be to load it down with dubious claims about Russia.

See if you can predict what the Democrats will do.