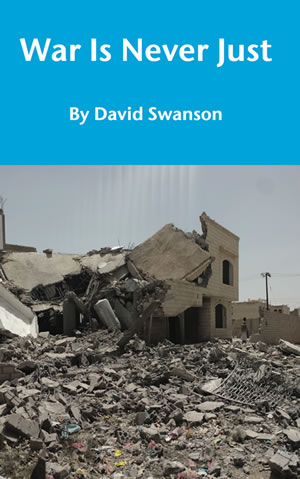 Excerpted from the just released book War Is Never Just.

World War II is often called “the good war,” and has been since the U.S. war on Vietnam to which it was then contrasted. World War II so dominates U.S. and therefore Western entertainment and education, that “good” often comes to mean something more than “just.” The winner of the “Miss Italy” beauty pageant earlier this year got herself into a bit of a scandal by declaring that she would have liked to live through World War II. While she was mocked, she was clearly not alone. Many would like to be part of something widely depicted as noble, heroic, and exciting. Should they actually find a time machine, I recommend they read the statements of some actual WWII veterans and survivors before they head back to join the fun.[i] For purposes of this book, however, I am going to look only at the claim that WWII was morally just.

No matter how many years one writes books, does interviews, publishes columns, and speaks at events, it remains virtually impossible to make it out the door of an event in the United States at which you’ve advocated abolishing war without somebody hitting you with the what-about-the-good-war question. This belief that there was a good war 75 years ago is a large part of what moves the U.S. public to tolerate dumping a trillion dollars a year into preparing in case there’s a good war next year,[ii] even in the face of so many dozens of wars during the past 70 years on which there’s general consensus that they were not good. Without rich, well-established myths about World War II, current propaganda about Russia or Syria or Iraq or China would sound as crazy to most people as it sounds to me. And of course the funding generated by the Good War legend leads to more bad wars, rather than preventing them. I’ve written on this topic at great length in many articles and books, especially War Is A Lie.[iii] But I’ll offer here a few key points that ought to at least place a few seeds of doubt in the minds of most U.S. supporters of WWII as a Just War.

Mark Allman and Tobias Winright, the “Just War” authors discussed in previous chapters, are not very forthcoming with their list of Just Wars, but they do mention in passing numerous unjust elements of the U.S. role in WWII, including U.S. and U.K. efforts to wipe out the populations of German cities[iv] and the insistence on unconditional surrenders.[v] However, they also suggest that they may believe this war was justly engaged in, unjustly conducted, and justly followed through on via the Marshall Plan, etc.[vi] I’m not sure Germany’s role as host of U.S. troops, weapons, and communications stations, and as collaborator in unjust U.S. wars over the years is included in the calculation.

Here are what I think of as the top 12 reasons the Good War wasn’t good/just.

“Anthony Eden, Britain’s foreign secretary, who’d been tasked by Churchill with handling queries about refugees, dealt coldly with one of many important delegations, saying that any diplomatic effort to obtain the release of the Jews from Hitler was ‘fantastically impossible.’ On a trip to the United States, Eden candidly told Cordell Hull, the secretary of state, that the real difficulty with asking Hitler for the Jews was that ‘Hitler might well take us up on any such offer, and there simply are not enough ships and means of transportation in the world to handle them.’ Churchill agreed. ‘Even were we to obtain permission to withdraw all the Jews,’ he wrote in reply to one pleading letter, ‘transport alone presents a problem which will be difficult of solution.’ Not enough shipping and transport? Two years earlier, the British had evacuated nearly 340,000 men from the beaches of Dunkirk in just nine days. The U.S. Air Force had many thousands of new planes. During even a brief armistice, the Allies could have airlifted and transported refugees in very large numbers out of the German sphere.”[vii]

Perhaps it does go to the question of “Right Intention” that the “good” side of the war simply did not give a damn about what would become the central example of the badness of the “bad” side of the war.

[x] Dave Grossman, On Killing: The Psychological Cost of Learning to Kill in War and Society (Back Bay Books: 1996).

[xv] RootsAction.org, “Move Away from Nonstop War. Close the Ramstein Air Base,” http://act.rootsaction.org/p/dia/action3/common/public/?action_KEY=12254

2 thoughts on “World War Two Was Not a Just War”