A Mossadegh Legacy Institute has been created.  If you’re not sure what that means, read a few of the endorsements:

In full agreement with Cindy Sheehan, especially where she emphasizes the American nature of this responsibility, of this moral wound [see below], I am very glad to learn about what you are doing, and pleased to endorse the mission of the Mossadegh Legacy Institute.

I really wish I could do more, but demands are so intense, it’s just impossible I am afraid.

The mission of this historic initiative should be (and indeed is) primarily an AMERICAN moral responsibility.

Why? Because the temporarily successful violent overthrow of the non-violent “George Washington of Iran” was the mother of almost all profoundly destructive subsequent errors of state judgement in the recent history of this country, at least since the deeply misguided CIA coup of August 19, 1953. Had the U.S. government not overthrown Iran’s young democratic government 60 years ago, history would have unfolded quite differently, and many of today’s conflicts would have been avoided.

So I firmly believe, that “We the People” should view the Mossadegh Legacy Institute (MLI) as a truly patriotic opportunity to help rehabilitate the collective conscience of our own nation. In other words, this is a neglected AMERICAN moral wound in need of authentic examination and healing, not just an Iranian, Middle Eastern, or “global South” festering wound.

Cindy Sheehan
www.cindysheehanssoapbox.com
Member of the Board of Endorsers, Mossadegh Legacy Institute (MLI)

As a U.S. citizen with a keen interest in history, I believe that Americans should be aware of Mohammad Mossadegh (1882-1967), the former Prime Minister of Iran, who attempted to nationalize the Iranian oil industry–which had previously been 80% “owned” by the company we know now as the BP, and 20% owned by Iran.

In 1953 the government of Great Britain obtained the use of the American CIA to overthrow Mossadegh’s democratic government. As a result, the Shah of Iran was returned to power, and ruled with a dictatorial iron fist, until he (in turn) was overthrown in 1979, by the Islamic Revolution of Iran, led by Ayatollah Khomeini.

Mohammad Mossadegh was a brilliant, well educated leader who could have changed the course of history if his government  had remained in power for a few more years. His life and legacy is a subject all people (especially Americans–who need to learn from history) should know about.

This is why I have joined this historic initiative.

Bruce Bridegroom
Film-maker, Historian, and Attorney at the Tucson, Arizona Law Offices of Bridegroom and Hayes — http://www.orovalleyaz.gov/Assets/_assets/econ_dev/pdf/Film+Festival+Press+Release.pdf
Co-Initiator of the MLI

The legacy of Mohammad Mossadegh, in particular his commitment to democracy, non-violence, and international law, serves a beacon and a moral example, not only for Iranian pro-democracy activists, but indeed for the entire world — a unique legacy that should be studied carefully, remembered, and practiced. Thus, I am happy to endorse the work of the Mossadegh Legacy Institute.

I congratulate you [for starting] this initiative. In a small way the Mossadegh Legacy Institute (MLI) is a beginning of an American acknowledgement of the profound harm done to the people of Iran by initiating a chain of political events that started with the CIA engineered coup that restored the autocratic Shah to power and led to a revolutionary process hijacked by repressive theocrats, in the name of Islam.

I admire very much the legacy of Dr. Mossadegh, his passion for democracy, justice, and his dedication to the Iranian people and nation that led him to challenge the exploitative arrangement that allowed foreign oil companies to deprive the country of its resource wealth.

For these reasons I will be proud to be listed among the endorsers of MLI’s mission statement–With my best wishes.

Prof. Richard A. Falk
The UN’s Special Rapporteur on human rights in occupied Palestine
http://en.wikipedia.org/wiki/Richard_A._Falk
Member of the Board of Endorsers, Mossadegh Legacy Institute (MLI)

As Prime Minister of Iran, Mohammad Mossadegh’s actions were motivated by a selfless dedication to improving the living conditions of the people his democratically elected government had the responsibility to serve. Accordingly, he courageously resisted the entreaties of special interest groups and foreign governments, whose immoral influence at the top echelons of government have always created havoc throughout the world, as is evident today when considering Israel’s influence on American foreign policy.
So I think Dr. Mossadegh should be honored with a posthumous Nobel Peace Prize in recognition of his legacy, which demonstrates that freedom and democracy are possible anywhere in the world. Honoring the “Elder of Ahmad Abad” in this manner would also bestow dignity to the Nobel Prize Committee itself.

Richard Forer
Author: Breakthrough: Transforming Fear Into Compassion – A New Perspective on the Israel-Palestine Conflict
http://www.redress.cc/zionism/rforer20120716
Member of the Board of Endorsers, Mossadegh Legacy Institute (MLI)

Here is an organization with the right mission in the right moment, a mission encapsulated in its perfect choice of name.

Mohammad Mossadegh is remembered, when he is remembered, as a man who worked to better the lives of Iranians, who resisted foreign control of his nation and its natural resources, and who understood war to be the ultimate evil.  Mossadegh’s tools were oratory, organizing, and integrity.  Not only did he choose not to use violence, but he was willing to give up power peacefully rather than allow a civil war to be waged in his name. 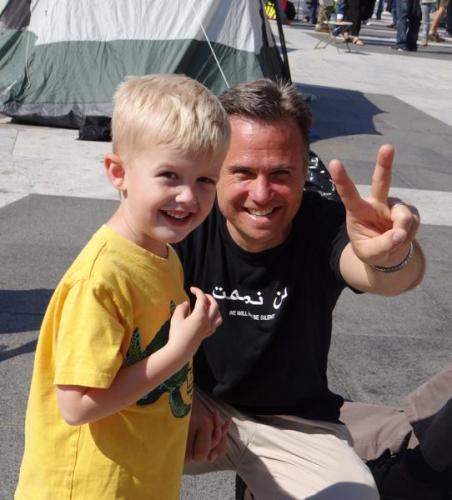 Westerners should find Mossadegh’s legacy valuable for two reasons.  First, his was an Iranian government more democratic and secular in nature than some others before and since.  Second, what was done to his government is a critical historical lesson for those not well-informed on this shameful tragedy.  When the CIA overthrew Mossadegh to install a U.S.-friendly dictatorship, it poisoned U.S.-Iranian relations from that day to this, and it developed a model for poisoning U.S. relations with many other nations, including Guatemala the very next year.

That Iranian people maintain any affection for the American people is a testament to the Iranians’ wisdom and rationality.  The U.S. public struggles to match Iranians in that regard.  Understanding our shared and painful history is a necessary part of a process of reconciliation.  Naming streets and landmarks in the United States for Mossadegh is a brilliant and creative idea, as is marking the 60th anniversary of the coup this summer at the Liberty Bell in Philadelphia, which Mossadegh had symbolically visited not long before the United States threw him out of power.  I hope that work on developing student and cultural exchanges between Iran and the United States might also become part of this project.

I admire and appreciate Mossadegh who would obviously be a better Nobel Peace Prize recipient than the EU or Obama. While I’m pursuing, along with Fredrik Heffermehl and others, a strategy of trying to strictly enforce Alfred Nobel’s will, in order to avoid the bestowing of Nobel Peace Prizes on either promoters of war or good humanitarians whose work is not for disarmament and demilitarization, I do believe that Mossadegh is long overdue for recognition. Statues, parks, streets, airports, halls, endowments, and peace rallies ought to be used to honor his legacy and to educate the world.

Having recently completed a study of the 1928 Kellogg Briand Pact, which bans war, and to which Iran and the United States and 80 some other nations are party, I would like to begin working to encourage Iran to ask the United States to state its intention of complying with the treaty.  Iran could also encourage 100 some additional nations to join the treaty, which can be accomplished simply by notifying the U.S. State Department.  All nations are accepted, by the terms of the treaty itself.

We should seek out such bright spots in our collective past and renew them.  There was a time in 1951 when Mossadegh visited the United States and the United Nations, as well as the Liberty Bell.  He was the Time magazine person of the year in 1952.  Many respected him, although begrudgingly.  Others truly liked and admired him.  We cannot undo the crime of 1953, the overthrow engineered from the same U.S. embassy that Iranians would occupy to prevent its repetition in 1979.  But we can focus on what the American and Iranian people have in common, which runs far deeper than the disagreements of governments.

And as Americans come to understand the Iranian people, we will be better able to face down a propaganda push for a war on Iran, not only because of our familiarity with the lies that launched the war on Iraq in 2003, not only because of our understanding of the lies that have framed official U.S. discussions of Iran since 1953, but also because the phrase “Iranian collateral damage” will mean to us people whom we know, love, and respect.

David Swanson
Author: WAR IS A LIE
https://davidswanson.org/about
Member of the Board of Endorsers, Mossadegh Legacy Institute (MLI)