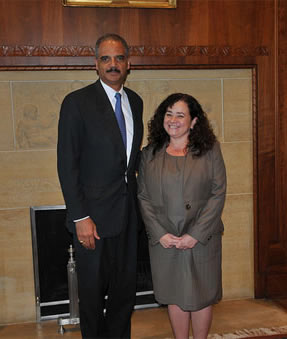 In the United States it’s hard to imagine admiring an attorney general. The words call to mind people like Eric Holder, Michael Mukasey, Alberto Gonzales, John Ashcroft, Janet Reno, and Edwin Meese. There were those who fantasized that Barack Obama would not prevent an attorney general from prosecuting top officials for torture, but the idea of a U.S. attorney general prosecuting a U.S. president for war/genocide doesn’t even enter the realm of fantasy (in part, because Americans don’t even think of what the U.S. military does in the Middle East in those terms).

For a lesson in daring to imagine equality before the law, we can turn our eyes toward Guatemala. Here’s a country suffering under the Monroe Doctrine since the dawn of time, a place where the United States engaged in human experimentation giving syphilis to unwitting victims during the time that U.S. lawyers were prosecuting Nazis in Nuremberg. Guatemala had a relatively decent government in 1954 when the CIA overthrew it. U.S. destruction has been unremitting in Guatemala, with the U.S. government backing dictators, killers, and torturers, including during the 1980s and 1990s, a period from which Guatemala is still trying to recover.

A new film called Burden of Peace tells the story of Claudia Paz y Paz, Attorney General of Guatemala from December 9, 2010 to May 17, 2014. Paz y Paz had a poster of Robert Kennedy on her wall during her time as attorney general, herself finding something admirable in a U.S. holder of that same office. Kennedy’s actual record was quite mixed, of course. Paz y Paz became attorney general following a long period of unaccountable crime, understood impunity, and rampant corruption.

A 1996 peace agreement did not end violence in Guatemala. The government remained corrupt, with killers still holding positions of power.

It’s interesting to imagine what would happen if a true reformer were made president or attorney general in the United States, while their staff and colleagues and Congress and the courts and the system of bribery and lobbying remained unchanged. It will be fun to watch Jeremy Corbyn try to take on the British Parliament. We have an example of how this works from Guatemala.

In Burden of Peace we see Claudia Paz y Paz meeting with an office of attorneys in a northen province that had solved zero murder cases and prosecuted almost no one. She insists on change. And she gets it. For over three years she achieves big increases in prosecutions and convictions, including of gang members, including of police officers.

This law-and-order heroism should appeal to Americans if they can overlook the fact that the United States helped cause the problem. I have a mixed reaction. I can’t be totally thrilled watching a SWAT team arrest gang members. This is not truth and reconciliation, but force and degradation. And yet I recognize that in a state of lawless violence it will be difficult to address other problems and solutions unless the violence is addressed first. Paz y Paz, in fact, reduced crime rates as solved murdered cases increased from 5% to 30%.

She had previously worked on the first big investigation of crimes committed during the civil war in Guatemala, which accused top military and political leaders, inlcuding the head of state, of genocide. Bishop Juan José Gerardi presented the report to the public and was murdered the next day. You see a big crowd taking part in his funeral in footage included in the film.

In her second year as AG, Paz y Paz reopened the investigation of war crimes. Soon she would issue warrants for the arrest of Oscar Mejia Victores, former Secretary of “Defense,” for genocide. But because of his age and health, he was not tried.

Paz y Paz continued to increase law enforcement, as Otto Perez Molina, a former military official, was elected president. Business elites wanted Paz y Paz not to prosecute military members. In fact they wanted her removed from office. But she held a four-year term and refused to leave early.

During the dictatorship of Rios Montt, Mayans had been murdered in large numbers. He was not held accountable. He enjoyed immunity as president of Congress until 2012. Then Paz y Paz prosecuted him for genocide. In Burden of Peace we see the trial, including survivors recounting the horrors of soldiers killing and raping, as the accused sits and listens.

His lawyers declare the trial illegal and rise and leave, leaving him sitting there alone. The trial is suspended, then reconvened with new lawyers. The elderly Montt is convicted and sentenced to decades in prison. We see the people of Guatemala celebrating.

And then a higher court overturns the sentence, and people protest to no avail. But Montt spends only one day in prison, and the rightwingers acquire a taste for blood. They pursue Paz y Paz. Seeking to block her from completing her fourth year in office, they charge her with abuse of power (although they publicly focus on accusing her of being a Marxist). The same court that overturned the sentence for Montt removes Paz y Paz from office.

She appeals, and we see a crowd cheering her at the appeal. She tries to run for reelection, and a court denies her that right. It’s over. She is out of office, and we see her staff as well as the public cheer for her, tearfully, as she departs, fleeing the country with her husband and son because she will no longer have security guards.

This is a true story that ends in May of 2014, crying out for a sequel. But earlier this month, Molina was forced to resign as president, after prosecutors accused him of running a scheme to defraud the customs service of millions of dollars, and Congress stripped him of immunity from prosecution. This was a first in Central America, as was much of what Claudia Paz y Paz did. It begins to appear that she was part of a change in the culture of Guatemalan governance, that the idea of holding the powerful to account has actually caught on.

Imagine if the United States were to leave Guatemala alone and try following its example in the U.S. Justice Department.