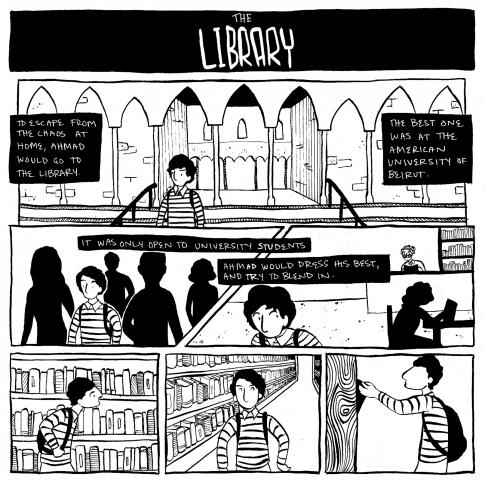 On October 29, 1948, the Israeli terrorist group Irgun ethnically cleansed the village of Safsaf in Palestine, lining some 70 men up, shooting them, dumping them in a ditch, and raping three girls. Among the survivors who fled to Lebanon were the grandparents of a young woman in Chicago who has a talent for telling stories in pictures and words. Safsaf was called Safsofa by the Romans and can be found as Safsufa on the iNakba app on your NSA-tracking device.

Baddawi is two things. It’s the name of a refugee camp in Lebanon where this young woman’s father grew up. The name comes from the word Bedouin, meaning nomad. “Al Beddaoui, Lebanon” locates it on Google-Earth. The residents have been there since 1948 or since they were born, and they are not nomads by choice. They live in a permament state of desiring to return home forever, even those who have never been home ever.

Justice for Palestine is where little sparks of opposition to war can be found among young people in the militarized United States of 2015, and where their art can be found as well.The second thing that Baddawi is, is a book that tells a story of childhood in Baddawi for Ahmad, the father of the author and artist Leila Abdelrazaq.

I’ve just read Baddawi and passed it along to my son. It’s a book that tells a personal story that is also a cultural and historical record. This is the unique story of one boy, but in great measure the story of millions of Palestinian refugees. Ahmad’s experiences growing up are often identical to my own or my son’s, but often dramatically different. He plays the games and learns the lessons of children everywhere, but confronts the struggles of poverty, of war, and of discrimination — of second-class citizenship in the land where Israel and its Western backers swept his unwanted ancestors.

Baddawi is the story of a rather remarkable boy, but a story that conveys a sense of what life was like and is like still for a great many boys and girls who live without nationality, not as a result of choosing world citizenship but by mandate of global powers who find their existence inconvenient. And yet the story is quite straightforwardly entertaining and good-sp 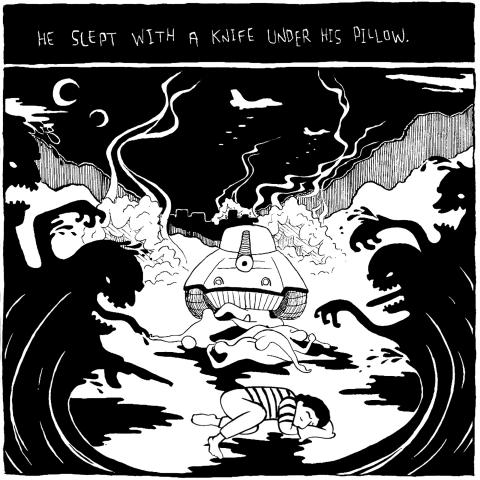 irited. One is disappointed when it ends rather abruptly, yet heartened to gain the impression that part two may be forthcoming.

I notice, incidentally, that there will be a hearing on Capitol Hill in Washington, D.C., on June 2nd, on Israel’s mistreatment of Palestinian Children, and that you can go here to ask your Misrepresentative and Senators to attend.

Full disclosure: I sometimes do work for this book’s publisher, but that work does not include reviewing books.