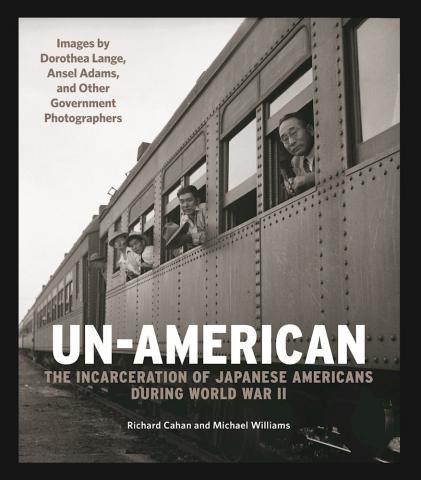 A new large photo book has just been published called Un-American: The Incarceration of Japanese Americans During World War II.

People who support creating a Muslim registry should take a look. Here are the victims before, in their small farms and their LA mansions. Here they are being forcibly removed. Here they are incarcerated. Here is what was done to their homes in their absence. Here they are in the camps, prisoners for nothing, and after their release.

To this day, no proof has ever been produced that any Japanese American planned to assist Japan in war against the United States in any way. Nor was there reason to think so at the time. Instead there was open admission of racist and greedy motivations on the part of government officials and white farmers respectively.

These photographs were the U.S. government’s own documentation of its crime, and the hired photographers included Ansel Adams, Dorothea Lange and others with the talent to capture stories in stills. The accompanying text by Richard Cahan and Michael Williams expands one’s understanding.

In 1936 President Franklin Roosevelt ordered the creation by the Office of Naval Intelligence of a list of Japanese-Americans who would be the “first to be placed in a concentration camp” once a war could be started.

In 1939 FDR ordered the ONI and the FBI to create a larger “custodial detention index” of primarily Japanese-, German-, and Italian-Americans, renamed and continued as the “security index” by J. Edgar Hoover after Attorney General Francis Biddle ordered it shut down.

The Alien Registration Act of 1940 required all non-citizen adults to register with the government. In early 1941 FDR commissioned a study of West coast Japanese-Americans, which concluded that they were no threat at all. He commissioned another study that reached the same conclusion.

On November 26, 1941, Roosevelt secretly ordered the creation of a list by Henry Field of Japanese and Japanese Americans.

On December 7, 1941, FDR issued a proclamation stripping Japanese in the United States of rights (and the very next day for Germans and Italians).

Within 24 hours of the Pearl Harbor and other Japanese attacks, the FBI broke into enough homes on its list to forcibly remove 1,212 Japanese Americans.

On January 14, 1942, FDR proclaimed that enemy aliens could be put in internment camps. On February 19, 1942, he ordered the internment of citizens and non-citizens alike.

From 1980 to 1983 a Congressional commission studied the history and concluded that Japanese-Americans and Japanese had been locked up in camps, not due to any evidence of a threat, but on the basis of racism and bigotry. The commission recommended $20,000 in reparations to each victim. In 1988, President Ronald Reagan signed legislation authorizing those reparations payments, and apologizing to the victims. This law acknowledged “race prejudice, war hysteria, and a failure of political leadership” as the factors that motivated the crime.

In 1992, President George H.W. Bush signed a law appropriating more finds for reparations payments. On the anniversary of Pearl Harbor he issued another formal apology, which included this claim: “The internment of Americans of Japanese ancestry was a great injustice, and it will never be repeated.”

In 2000, a memorial was dedicated in Washington, D.C., that includes, carved in stone, these words:

“The lessons learned must remain as a grave reminder of what we must not allow to happen again to any group.”
–attributed to Daniel K. Inouye, U.S. Congressman and Senator

In 2001, Congress passed a law making 10 of the camps historical landmarks and stating that “places like Manzanar, Tule Lake, Heart Mountain, Topaz, Amache, Jerome, and Rohwer will forever stand as reminders that this nation failed in its most sacred duty to protect its citizens against prejudice, greed, and political expediency.”

The question is how many more such failures will be allowed. The first section of a mass-crime-against-Muslims photo book could be made now. Perhaps it would help: a photo album of Muslim Americans.

It’s highly encouraging that high-tech companies, some of them generally willing to violate people’s rights on behalf of the U.S. government, are announcing that they will not take part in creating a Muslim registry. This is encouraging for what it is, but also for what it suggests, namely that these companies are not completely sociopathic. They may readily assist in unconstitutional surveillance, political repression, or censorship, but the possibility must now be recognized that they would not do so if they came to view those things as unacceptable in the way that racism is unacceptable.

Combine the resistance to a Muslim registry with the refusal of staffers at the Department of Energy to facilitate a witch hunt of reality-based climate observers, and you’ve got the outlines of a nonviolent revolution that can’t come a moment too soon and could have been beneficial many times over past decades and centuries.