This article is the foreword to David Swanson’s new book, War No More: The Case for Abolition.

I lived in Iraq during the 2003 Shock and Awe bombing. On April 1st, about two weeks into the aerial bombardment, a medical doctor who was one of my fellow peace team members urged me to go with her to the Al Kindi Hospital in Baghdad, where she knew she could be of some help. With no medical training, I tried to be unobtrusive, as families raced into the hospital carrying wounded loved ones. At one point, a woman sitting next to me began to weep uncontrollably. “How I tell him?” she asked, in broken English. “What I say?” She was Jamela Abbas, the aunt of a young man, named Ali. Early in the morning on March 31st, U.S. war planes had fired on her family home, while she alone of all her family was outside. Jamela wept as she searched for words to tell Ali that surgeons had amputated both of his badly damaged arms, close to his shoulders. What’s more, she would have to tell him that she was now his sole surviving relative.

I soon heard how that conversation had gone. It was reported to me that when Ali, aged 12, learned that he had lost both of his arms, he responded by asking “Will I always be this way?” 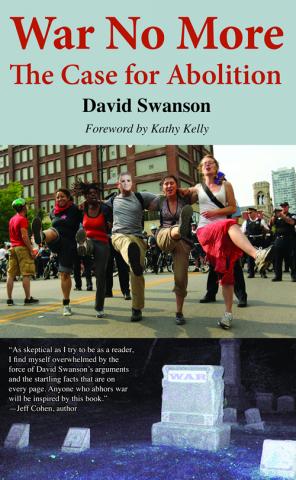 Returning to the Al Fanar hotel, I hid in my room. Furious tears flowed. I remember pounding my pillow and asking “Will we always be this way?”

David Swanson reminds me to look to humanity’s incredible achievements in resisting war, in choosing the alternatives which we have yet to show our full power to realize.

A hundred years ago, Eugene Debs campaigned tirelessly in the U.S. to build a better society, where justice and equality would prevail and ordinary people would no longer be sent to fight wars on behalf of tyrannical elites. From 1900 to 1920 Debs ran for president in each of five elections. He waged his 1920 campaign from inside the Atlanta prison to which he’d been sentenced for sedition for having spoken vigorously against U.S. entry into World War I. Insisting that wars throughout history have always been fought for purposes of conquest and plunder, Debs had distinguished between the master class that declares wars and the subjugated who fight the battles. “The master class has had all to gain and nothing to lose,” said Debs in the speech for which he was imprisoned, “while the subject class has had nothing to gain and all to lose—especially their lives.”

Debs hoped to create a mindset throughout the American electorate that withstood propaganda and rejected war. It was no easy process. As a labor historian writes, “With no radio and television spots, and with little sympathetic coverage of progressive, third party causes, there was no alternative but to travel incessantly, one city or whistle-stop at a time, in searing heat or numbing cold, before crowds large or small, in whatever hall, park or train station where a crowd could be assembled.”

He didn’t prevent U.S. entry into World War I, but Swanson tells us in his 2011 book, When the World Outlawed War, there came a point in U.S. history, in 1928, when wealthy elites decided that it was in their enlightened self-interest to negotiate the Kellogg-Briand Pact, intended to avert future wars, and to prevent future U.S. governments from seeking war. Swanson encourages us to study and build on moments in history when war was rejected, and to refuse to tell ourselves that warfare is inevitable.

Surely we must join Swanson in acknowledging the enormous challenges we face in campaigning to avoid war, or to abolish it. He writes: “In addition to being immersed in a false world view of war’s inevitability, people in the United States are up against corrupt elections, complicit media, shoddy education, slick propaganda, insidious entertainment, and a gargantuan permanent war machine falsely presented as a necessary economic program that cannot be dismantled.” Swanson refuses to be deterred by large challenges. An ethical life is an extraordinary challenge, and encompasses lesser challenges, such as democratizing our societies. Part of the challenge is to honestly acknowledge its difficulty: to clear-sightedly witness the forces that make war more likely in our time and place, but Swanson refuses to categorize these forces as insurmountable obstacles.

A few years ago, I heard once more about Jamela Abbas’ nephew, Ali. Now he was 16 years old, living in London where a BBC reporter had interviewed him. Ali had become an accomplished artist, using his toes to hold a paint brush. He had also learned to feed himself using his feet. “Ali,” asked the interviewer, “what would you like to be when you grow up?” In perfect English, Ali had answered, “I’m not sure. But I would like to work for peace.” David Swanson reminds us that we will not always be this way. We will transcend in ways that we cannot yet properly imagine, through the determination to rise above our incapacities and achieve our purposes on earth. Obviously Ali’s story is not a feel-good story. Humanity has lost so much to war and what so often seems its incapacity for peace is like the most grievous of disfigurements. We don’t know the ways we will discover in which to work to rise above these disfigurements. We learn from the past, we keep our eyes on our goal, we fully grieve our losses, and we expect to be surprised by the fruits of diligent labor and a passion to keep humanity alive, and to help it create again.

If David is right, if humanity survives, war itself will go the route of death-duels and infanticide, child labor and institutionalized slavery. Perhaps someday, beyond being made illegal, it will even be eliminated. Our other struggles for justice, against the slow grinding war of rich against poor, against the human sacrifice of capital punishment, against the tyranny that the fear of war so emboldens, feed into this one. Our organized movements working for these and countless other causes often are themselves models of peace, of coordination, a dissolution of isolation and of conflict in creative fellowship, the end of war made, in patches, already visible.

In Chicago, where I live, an annual summer extravaganza has been held on the lakefront for as long as I can remember. Called “The Air and Water Show,” it grew in the past decade into a huge display of military force and a significant recruiting event. Prior to the big show, the Air Force would practice military maneuvers and we’d hear sonic booms throughout a week of preparation. The event would attract millions of people, and amid a picnic atmosphere the U.S. military potential to destroy and maim other people was presented as a set of heroic, triumphant adventures.

In the summer of 2013, word reached me in Afghanistan that the air and water show had occurred but that the U.S. military was a “no show.”

My friend Sean had staked out a park entrance for the previous few yearly events in a solo protest, cheerily encouraging attendees to “enjoy the show” all the more for its incredible cost to them in tax dollars, in lives and global stability and political freedom lost to imperial militarization. Eager to acknowledge the human impulse to marvel at the impressive spectacle and technical achievement on display, he would insist of the planes, and in as friendly a tone as possible, “They look a lot cooler when they’re not bombing you!” This year he was expecting smaller crowds, having heard (although apparently too busy assembling his several thousand fliers to closely research this year’s particular event) that several military acts had cancelled. “Two hundred flyers later, I found out that this was because THE MILITARY HAD BACKED OUT!” he wrote me on the day itself: “They weren’t there _at all_ save for some desultory Air Force tents that I did find when I biked through looking for recruitment stations. I suddenly understood why I hadn’t heard any sonic booms leading up to the weekend.” (I had always complained to Sean of the yearly agony of listening to those planes rehearse for the show) “Too pleased to be mortified by my own idiocy, I put away my fliers and biked happily through the event. It was a lovely morning, and the skies of Chicago had been healed!”

Our incapacities are never the whole story; our victories come in small cumulative ways that surprise us. A movement of millions arises to protest a war, whose onset is delayed, its impact lessened, by how many months or years, by how many lives never lost, by how many limbs never torn from the bodies of children? How completely are the cruel imaginations of the war-makers distracted by having to defend their current lethal plans, how many new outrages, thanks to our resistance, will they never so much as conceive? By how many factors as the years proceed will our demonstrations against war continue, with setbacks, to grow? How acutely will the humanity of our neighbors be aroused, to what level will their awareness be raised, how much more tightly knit in community will they learn to be in our shared efforts to challenge and resist war? Of course we can’t know.

What we know is that we won’t always be this way. War may exterminate us utterly, and if unchecked, unchallenged, it shows every potential for doing so. But David Swanson’s War No More imagines a time where the Ali Abbases of the world exhibit their tremendous courage in a world that has abolished warfare, where no-one has to relive their tragedies at the hands of rampaging nations, where we celebrate the demise of war. Beyond this it envisions a time when humanity has found the true purpose, meaning, and community of its calling to end warfare together, to live the challenge that is replacing war with peace, discovering lives of resistance, and of truly human activity. Rather than glorify armed soldiers as heroes, let us appreciate a child rendered armless by a U.S. bomb who must know that few incapacities are an excuse for inaction, that what is or isn’t possible changes, and who, despite all we’ve done to him, still resolutely intends to work for peace.

War No More: The Case for Abolition is available on Powells, Amazon, Barnes & Noble, and available for $2 as PDF, ePub, kindle, audio, or iTunes, or at discount when buying 10 or more, all at https://davidswanson.org/warnomore