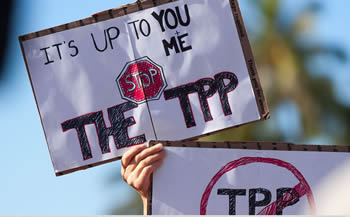 The proposal for the Trans-Pacific Partnership (TPP) is a test of whether the people of the United States can communicate something critically important to each other that the major media corporations do not want communicated.

For years I’ve joined with others in quoting people like former U.S. Trade Representative Ron Kirk to the effect that if the text of the TPP were shown to the public, that would be the end of it, because it’s just so awful.

The role of communicating what’s wrong with the TPP cannot be left to the major corporate media. You can, for example, check out NPR, or Reuters, or the Washington Post, and come away completely uninspired by the importance of stopping the TPP, and generally unenlightened about what’s in it. Articles with “Here Are the Details” headlines provide very few details, drop a few hints, and focus on “he said – she said” coverage of who likes the TPP and who doesn’t rather than any credible communication of who is right and what the TPP actually has in it.

The full text was made available here, but the site is sometimes down for “maintenance” including outside the hours that it says it will be (and at least the main text of it can be searched here – the page states that the annexes cannot be searched but they show up in the results anyway). The text is also posted here in sections with lots of U.S. flags. The text is here or here in PDFs. Very helpful analysis by Public Citizen is here and here.

The trouble is that the TPP is longer and more boring than a presidential debate, with each section prefaced by pages of definitions, acronyms, unenforceable rhetoric, references to other sections, etc. — much of it apparently put there purely for obfuscation. So, here’s an attempt to communicate what appear, based on trying to read the darn thing and reading the analyses of experts, to be some of the key points:

Under the TPP, corporations will be able to appeal the laws of nations to 3-member panels of arbitrators, with one arbitrator chosen by them and a second agreed to by both them and the nation whose laws they are seeking to overturn. See the chapter on “investment,” for how this works. It means that a foreign oil or mining corporation, for example, could overrule a U.S. environmental law by appealing to 2 out of 3 corporate lawyers on a secret panel.

The TPP puts a large number of disastrous policies in place without waiting for corporate arbitration. For example, the U.S. Department of Energy would be required to approve any applications to export liquefied “natural” gas — meaning more fracking, more destruction of the earth’s climate, more profits for those who’ve been writing this treaty in secret for years, but not more sustainability, environmental protection, or even U.S. energy “independence.”

The TPP would lower U.S. tariffs to zero while keeping Vietnam’s, for example, in place, which — along with no meaningful or enforceable labor standards — will encourage U.S. corporations to move even more jobs abroad to low-wage and even slave labor. The Obama Administration reported on slavery in Malaysia, then altered Malaysia’s ranking in order to allow its participation in the TPP. This race to the bottom would lower U.S. wages without encouraging better practices abroad.

“According to an initial analysis published in the Wall Street Journal, the U.S. market access concessions alone will increase the U.S. trade deficit in manufactured goods and autos and auto parts by more than $55 billion dollars resulting in the loss of more than 330,000 jobs.” —Public Citizen

The TPP could require the United States to import food that doesn’t meet U.S. safety standards. Any U.S. food safety rule on pesticides, labeling, or additives that is higher than international standards could be challenged as an “illegal trade barrier.”

The TPP would threaten provisions included in Medicare, Medicaid, and veterans’ health programs to make medicines more affordable, as well as domestic patent and drug-pricing laws.

The TPP is broader and more encompassing than NAFTA, and weakens rather than strengthening NAFTA’s weak protections for labor and the environment. Barack Obama campaigned on substantially reforming NAFTA in those regards. Instead, he’s now proposing the worst of NAFTA on steroids.

What can be done?

Read a section of the TPP and consider whether it ought to be law, exactly as written in secret with hundreds of corporate consultants.

“If you don’t oppose and vote against the Trans-Pacific Partnership, I will not vote for you in any future primary or general election in which you are a candidate.”

“We are writing to urge the Congress to reject the Trans-Pacific Partnership (TPP). This agreement would destroy jobs, degrade the environment, undermine the Internet and weaken U.S. democracy and sovereignty.”

Take part in this event and reproduce it elsewhere.