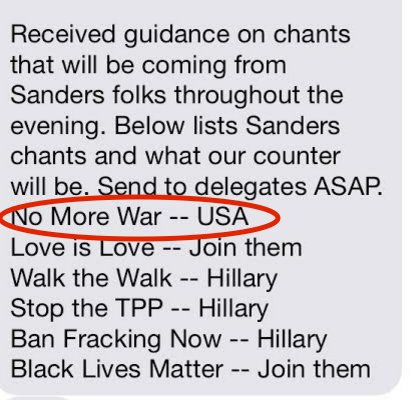 These were instructions passed around during the last night of the Wells Fargo Arena Anti-Russia Don’t-Say-TPP Call-It-Debt-Free-College-Not-Free-College Democratic Party Extravaganza. Noise Makers were deployed. Lights could be switched off on people as needed. Delegates were prevented from walking out. And chants like “Black Lives Matter” and “Love Is Love” were joined in by the corporatists.

However, if you chanted “Ban Fracking Now,” they would chant “Hillary” back at you, as if having Hillary as their beloved leader was better than banning fracking. Also if you chanted “Stop TPP” or “Walk the Walk” you’d be greeted by screams of “Hillary!”

But what if you shouted “No More War”? Wouldn’t they join in and try to own that one? Don’t Christmas decorations even today still sometimes say “Peace on Earth”? Didn’t Tim Kaine pretend in his speech that Woodrow Wilson was a peace maker? Doesn’t the Pentagon claim that it kills people for peace? Wouldn’t trying to shout down opposition to war be a step too far even for a pro-fracking, pro-corporate-trade, cult of personality?

The response of USA has got to be the worst choice they could have gone with. The poison of nationalism/patriotism is the driving force behind support for mass-murder expeditions. It turns clever shouts into mindless obedience.