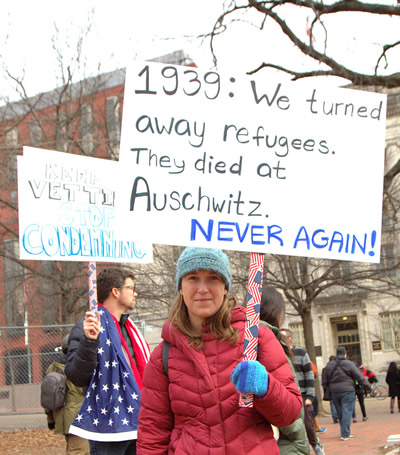 Airport resistance is the biggest step forward by the U.S. public in years.

Why do I say that? Because this is unfunded, largely unpartisan activism that is largely selfless, largely focused on helping unknown strangers, driven by compassion and love, not political ideology, greed, or vengeance, and in line with activism around the globe. It’s also targeted at the location of the harm, directly resisting the injustice, and achieving immediate partial successes, including very meaningful successes for certain individuals. It’s gaining support from people never before engaged in any activism. And it shows no signs of any significant undesirable side-effects. This is a movement to be built on, and I have an idea what a next step should be.

Of course it is not at all uncommon for people to selflessly act for strangers. Much of the charity industry is driven by that sort of generosity year after year. But activist organizations are constantly telling themselves that this is not the case, for example that ending the bombing of distant unknown families can only be accomplished by advertising the financial cost of it or instituting a draft or making known the harm to veterans of the military doing the bombing. Yet when the peace movement in the United States has been stronger, in the 1920s in particular and also in the 1960s, acting on behalf of others has been central, as it was to the first big activist campaign, that begun against the slave trade in London, and as it has been in countless campaigns. Working to protect the natural environment is work for future generations. You can’t get more selfless or enlightened than that.

But what’s unique about this moment of sympathy and solidarity with refugees from nations the United States has bombed (plus Iran which it has gone after in other ways) is that it runs counter to U.S. government propaganda, it replaces fear with courage, hatred with love. This isn’t just love stepping into a void. This is a transformation into love from its opposite. This is why I think another major step might be possible.

When I listen to people interviewed at New York protests, or look at the signs they bring to the White House and to airports around the country, I’m struck by the expressions of love and concern for others, more than by the presence of partisanship or hatred for Donald Trump (though it certainly is a factor). And I’m bowled over by the widespread recognition of the lesson from history of the damage done to European Jews by U.S. immigration policy. Protesters’ signs indicate an awareness that Jewish refugees were rejected by the West, that Western governments met and refused to accept their mass eviction from Germany, that the U.S. Coast Guard chased a ship away from Miami many of whose passengers later died in the camps, that Anne Frank’s visa application was rejected by the U.S. State Department. I had no idea people knew these things, much less learned and applied a lesson from them.

Of course, some protesters have personal connections to those put at risk by Trump’s Muslim ban (and that’s what it is, based on his campaign promises and his renaming of the Global War on [of] Terrorism to the Fight Against Radical Islamism). And others find ways to identify themselves with those at risk, such as: “We’re a nation of immigrants. My great-grandparents were immigrants.” But this doesn’t make the movement less altruistic. Identifying with people in some way, even as fellow human beings, is a common part of coming to care about them and to act for or with them.

There are indications that this sentiment is not limited to those protesting and resisting at airports. The ACLU has never raised more money before. And check out this tweet:

I’m 20 minutes from landing at JFK. Pilot just warned us about delays due to #NoBan protests at T4. The passengers’ response? Applause.

There are also protests happening around the world, outside of the United States, allowing us to build a global movement against global injustices even when those injustices are headquartered in Washington, D.C. And in Washington D.C. and around the U.S. we see unprecedented resistance from an Acting Attorney General and from judges — a group that seemed to be mostly asleep for the past 16 years.

And Canada, which has resisted U.S. wars, aided those enslaved, given shelter to conscientious objectors, and protected people from all variety of U.S. injustice for centuries, stepped up too:

To those fleeing persecution, terror & war, Canadians will welcome you, regardless of your faith. Diversity is our strength #WelcomeToCanada

There are elements of partisanship in this uprising that could hold it back, and of nationalism as well. Some liberals are not so much concerned about human cruelty as about Trump disrespecting their sacred U.S. military. Where were these crowds when President Barack Obama was setting records for deportations, or when he was bombing the nations that Trump is now banning refugees from, or when he was purporting to create the presidential power to do what Trump is now doing?

Our task is not to erase mistakes of the recent past but not to focus on them either. Our task is to move forward with what we now have. And I think the way forward involves taking one additional major step beyond where the resistance is right now. Once people have come to resist injustices to refugees from wars, to identify with them, to contemplate lives lived in horror of immigration police, to consider the suffering of family members in distant lands suddenly blocked from visiting their loved ones, it seems to be a quite achievable step to begin opposing dropping bombs on those family members. If you’re going to oppose harm to refugees, why not oppose the destruction of their homes that makes them refugees in the first place? If you are willing to question government fear-mongering, you are ready to question the government dogma that says more weapons sales and more bombs and more troops will make things better rather than worse.

If that step is taken, then this becomes a movement that cares not only about that fraction of suffering populations that finds some tenuous connection to U.S. shores, but about that whole 96% of humanity that lacks any such connection. Then we really have something new under the sun. Then we really transform U.S. policy. Then the trillion dollars a year wasted on preparing for more wars can be cut into a little bit to fund human and environmental needs beyond our wildest imaginings.

Number of US citizens who traveled to Iraq, Syria to kills locals on behalf of ISIS: 250. Syrians or Iraqis who carried out attacks in US: 0

What about number who went there to kill locals on behalf of US military?