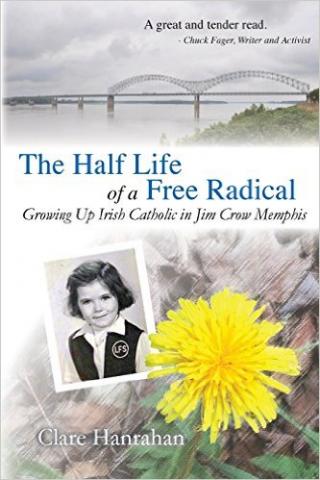 First and foremost this is an entertaining and irreverent tale of childhood and adolescence told with great humor, honesty, and empathy. But it’s also told by someone who became a peace and justice and environmentalist activist in later life, someone able to look back on the poverty, racism, consumerism, militarism, sexism, and Catholicism of her youth with passion and perspective — even appreciation for all the good that was mixed in with the bad. Hanrahan writes what in outline form would read like an endless tale of misfortune, and yet leaves you with the thought of how much riotous fun she and her eight siblings and other acquaintances had.

I know Clare, though I learned much more about her from this book, and I wouldn’t risk changing her if I had a time machine and magical powers. But I still found myself wondering, as with most stories of most people in the United States and much of the world, how different Hanrahan’s life would have been in a society with the decency to provide free college and free job training as needed, or a society that integrated civic activism into everyone’s life, or a society in which peace activist careers were marketed on the level of military recruitment ads or even marketed at all so that they weren’t so frequently found so late, or a society in which some of the best people didn’t live below a taxable salary level so as not to pay taxes for wars.

Hanrahan gives us her family genealogy first, and by doing so teaches some U.S. history that echoes through the book and the years. So, she shows us the cruelty of Jim Crow, for example, through personal experiences as a white girl, but illuminates it with an understanding of its origins, and — even more importantly — an awareness of its latest incarnations today. She also contrasts what she knows of the history of Memphis with what she was taught in school in Memphis growing up.

Hanrahan tells her story largely in chronological order, with no lengthy flashbacks, but with numerous quick bits of foreshadowing. For example:

“Brother Tommy gouged his initials, TPH, with a pocket knife on that same bannister long before the American war in Viet Nam maimed his hand, stole his youth, poisoned him with Agent Orange, and eventually took his life and that of his twin brother Danny. The bannister was later knocked down by a speeding car that careened into the porch stopping just short of the front bedroom.”

Tommy returned from Vietnam to a  hospital. “In my naiveté,” Hanrahan writes,

“I rushed to my brother’s bedside to embrace him. I may even have called him ‘my hero’ as I approached, expecting a hug. Lightning fast his good arm flailed out knocking me across the room and onto the floor. ‘Wake up!’ he said. ‘Wake up you stupid bitch.’ I can still hear those harsh words. Dazed and confused, I picked myself up and backed away. This was not the brother I had sent away with a patriotic poem, proudly recited before my senior class.”

Hanrahan’s two veteran brothers suffered in many ways, and failed to fit back into society in many ways, but it was the cruelty toward women that they came back from the war with that their sister Clare eventually found intolerable.

When Hanrahan left Memphis she saw a lot of the country and a bit of the world, including living off the grid on land and water, joining intentional communities and finding her way to a job writing for peace. She also protested for peace and spent six months behind bars. During the course of her ramblings, Hanrahan managed to be present at or part of an extraordinary number of crucial events and developments in recent U.S. history. Hanrahan became editor of Rural Southern Voice for Peace just in time for the first Gulf War and the awful wars that have followed.

Hanrahan found her way back to Memphis on numerous occasions, sometimes for funerals, but also to be part of activist efforts such as the successful campaign to preserve the band shell in Overton Park launched by one of her brothers. Hanrahan intersperses her memories with her dreams and poetry, adding emotional depth to an account of an extraordinary family in a struggling city that I’ve enjoyed visiting but would like to visit again with this book as a guide.