“It would take half our salary to buy one of the sweat shirts we produce,” Josefina Hernandez Ponce told students at the University of Virginia on Wednesday night. The classroom was packed to capacity with students in every seat and squeezed in on the floor.

But that familiar story wasn’t all that Hernandez Ponce and fellow worker Joaquin Alas Salguero had come to talk about. Theirs are stories of success. They work in factories in Mexico and El Salvador that have unionized and won worker rights and higher pay and benefits with help from the activism of US students.

But those victories, combined with the shifting requirements of “free trade” agreements, are driving business to more abusive factories and nations. These workers are asking students and other Americans to help them stay employed.

United Students Against Sweatshops has organized a tour of college campuses for the workers. Some of the colleges they’re visiting are on the list of 151 that have joined the Workers Rights Consortium http://www.workersrights.org – an independent non-profit that monitors working conditions in factories.

Others, including UVA, have joined a corporate-dominated substitute called the Fair Labor Association. UVA is paying 1 percent of its licensing fees, through the FLA, to companies to monitor themselves, and is doing so even though the FLA has given its approval to companies engaging in the most abusive practices.

So, the chief goal of student activists at the University of Virginia is persuading the administration to switch from the FLA to the WRC.

The students seemed motivated to do so after hearing the stories of what life is like for the people who produce their shirts.

Josefina Hernandez Ponce is a worker and union leader from the Mex Mode factory (formerly Kukdong) in Puebla, Mexico.

Hernandez Ponce said that when companies come to what they call third-world countries, the governments there, including hers in Mexico, do not require that they obey the nation’s labor laws.

“We began to organize because our rights were being violated, including physical and verbal abuse,” she said. “And we felt a lot of pressure not to organize, including from the government.

“But we had the support of international organizations, of the people for whom we were sewing the sweatshirts, some of whom could be the future owners of the factory or of the shirt company…and also of the AFL-CIO, the Campaign for Labor Rights, and the Workers Rights Consortium, which monitored our factories.”

In the past five years, Hernandez Ponce said, they have achieved annual salary increases. Pay used to be $30 per week and is now a minimum of $60 and as high as $180 per week. No longer are workers tested for pregnancy and denied work if they are pregnant. Pregnant workers are permitted to sit or stand and to take breaks. This is not the case, she said, at any other factory in Mexico.

The Mex Mode factory does what most are now required to do: “the complete package.” The factory buys the thread and machines; it weaves and dyes and prints and assembles and packages for export. And Mex Mode was doing well until a year ago, when Nike reduced its orders from 100,000 pieces per month to 25,000.

Nike argues that Mex Mode is too expensive. When the WTO’s quota system ended in January of 2005, Nike and others began shifting more work to China and Vietnam, and other countries that openly violate workers’ rights. Nike has work in 152 factories in China and 12 in Mexico. In 11 of the factories in Mexico, workers have few if any rights.

“We’re not against workers from anywhere else,” Hernandez Ponce said. “I met a woman from Los Angeles who said we were stealing jobs from the United States. Well, you could also say that about immigrants who come here. We want to earn a living where we are and not have to emigrate.”

If unionizing a Mexican factory seems like a victory, what about this one? Workers at a factory in El Salvador own a majority stake in the factory and work with no managers. That’s better than most workers have it in the United States. But the wages are far lower and the whole operation is in danger.

Joaquin Alas Salguero is a worker and union leader from the Just Garments factory in El Salvador. He serves as Secretary General of the Textile Workers Union in his country. 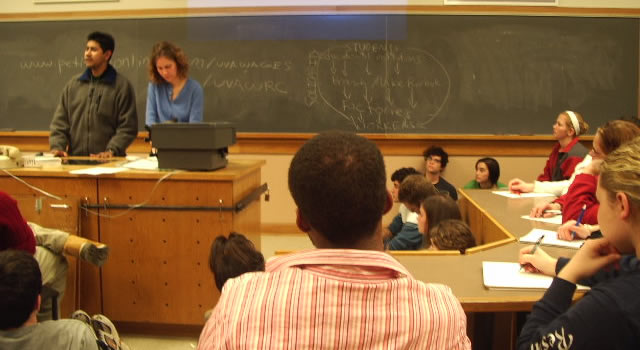 The Just Garments factory is not looked on favorably by the owners of other factories or by the government, because it is run by the workers. The workers own 56% of the factory, having won compensation for wrongdoing from the Gap and Lands End, and having invested the money in ownership.

But Just Garments does not have the extra capital to buy materials and machines in order to provide a “complete package.” So it works only on subcontracted projects and makes less profit.

Just Garments is in search of a loan of, or numerous small loans totaling, $120,000 so that it can buy the fabric needed to fulfill a contract with a large t-shirt distributor.

Alas Salguero said that CAFTA is only benefiting large businesses while hurting the people of El Salvador. If there is an epidemic, he said, the government is forbidden to buy inexpensive medicines.

Hernandez Ponce said “free trade” is similarly bad for Mexico, which is now considering an agreement with China. While small businesses in Mexico are heavily taxed, she said, transnational companies are given free land and tax breaks and utilities.

The tour that these and other workers are making has stops planned in these towns:
http://www.studentsagainstsweatshops.org/workertour.php