The chair of the South Carolina Democratic Party called to complain that I was being unfair to him, and maybe he was right. But I’d simply urged the need to avoid any appearance of bias, and if the chairman doesn’t understand that, he’s in for a heck of a lot more criticism than he’s ever imagined. This is his bio on the party website at 11:15 a.m. ET on Friday, February 26, just after he called me: 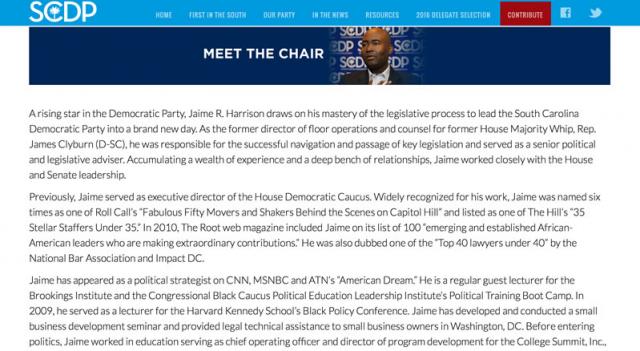 The Washington Times had prompted Harrison’s call with this article:

. . . What his bio on the party’s Web page doesn’t mention, though, is that Mr. Harrison is also a principal at the Podesta Group, a lobbying firm founded by brothers Tony and John Podesta — the same John Podesta who is chairman of Hillary Clinton’s presidential campaign.

Mr. Harrison’s day job is likely to get more scrutiny as the presidential campaign turns to South Carolina and questions continue to swirl about whether the Democratic Party apparatus is fairly treating Mrs. Clinton’s challenger, Sen. Bernard Sanders of Vermont. . . .

“If you want to avoid appearances of conflict of interest, you need to be completely open and reveal that,” said David Swanson, a spokesman at Rootsaction.org, a progressive online group that also has organized a petition asking for the ouster of the head of the Democratic National Committee. “Someone can be in favor of one candidate and still conduct a fair primary election, but if they’re hiding that they have close ties — beyond just electoral interest, but with actual monetary interests — that starts to look bad.”

Harrison called me up and recounted his long connections with staffers for Bernie Sanders, and said that he had been the first to invite Sanders to come speak even before he was officially a candidate. Harrison said he’d also had Sanders as the first ever guest in his video series called “Chair Chats.” Here’s that video:

And here’s one with Hillary Clinton, which has about half as many views.

I said I was certain they would indeed, whether true or not, but that I had merely answered a reporter’s question on one point, that of Harrison’s bio on the party site leaving out what he did for a living, namely that he worked for a Clinton-affiliated organization. Amazingly, Harrison claimed not to know whether his bio included that info or not. He blamed me for not investigating it myself, while he himself claimed not to have looked into it either. And he assured me that if I “googled” him I’d see that he worked for the Podesta Group.

But isn’t that the point, I asked? If I google Santorum I’ll find something else entirely, but that’s what Google shows, not what Santorum chooses to display. If everyone can find out that your paycheck comes from a Clinton-associated group, but that’s left out of your bio, how does that look? Harrison promised to look into it and to make sure that it said from now on right at the top: “Jamie Harrison, chair of the South Carolina Democratic Party and Principle at the Podesta Group….”

I said I thought that would be a good idea.

The Podesta Group was founded by John and Tony Podesta, the former serving also as Hillary Clinton’s campaign chair.

I explained to Harrison that my concern was not over any actual unfair treatment I knew him to have engaged in, but over the appearance of it in a context that had everyone understandably on the lookout for bias. I pointed out to him that the DNC Chair was quite openly on Hillary Clinton’s side, had sought to minimize debates and hide them on Saturday nights and other times of low viewership, had sought to deny Sanders access to his own voter files, had just opened up the Democratic Party to money from corporate lobbyists to benefit one candidate, had refused to release the results in Iowa, etc., and that the Party had its superdelegates lined up for Hillary in open defiance of popular will.

Harrison said he agreed with me that the superdelegate system and the electoral college for that matter should be scrapped. And he agreed with my blaming the DNC, which he pointed out was not the South Carolina Democratic Party.

The funny thing is, after I hung up, I looked at Harrison’s bio on the Podesta Group website. That bio is very open about his Democratic Party identifications. And they include this: “Member of the DNC Executive Committee.”