Should a war criminal be permitted to speak on the Fourth of July at Thomas Jefferson’s home, Monticello?

Right Now, Wherever You Are: The Thomas Jefferson Foundation, a private nonprofit, owns and operates Monticello with a professed mission of preservation and education. Call Monticello right now and ask them to uninvite Bush: (434) 984-9822. Then let the Daily Progress newspaper in Charlottesville know that you’ve done that: enewstips@dailyprogress.com

In Charlottesville on July 4th: Join us for a colorful nonviolent exercise of our First Amendment rights at 8:30 a.m. at the first parking lot on the right on Rt. 53 just east of Rt. 20. Or attend the event at Monticello, open to the public. 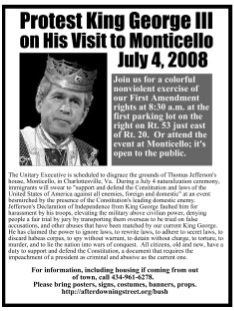 The Unitary Executive is scheduled to disgrace the grounds of Thomas Jefferson’s house, Monticello, in Charlottesville, Va. During a July 4 naturalization ceremony, immigrants will swear to “support and defend the Constitution and laws of the United States of America against all enemies, foreign and domestic” at an event besmirched by the presence of the Constitution’s leading domestic enemy. Jefferson’s Declaration of Independence from King George faulted him for harassment by his troops, elevating the military above civilian power, denying people a fair trial by jury by transporting them overseas to be tried on false accusations, and other abuses that have been matched by our current King George. He has claimed the power to ignore laws, to rewrite laws, to adhere to secret laws, to discard habeas corpus, to spy without warrant, to detain without charge, to torture, to murder, and to lie the nation into wars of conquest. All citizens, old and new, have a duty to support and defend the Constitution, a document that requires the impeachment of a president as criminal and abusive as the current one.