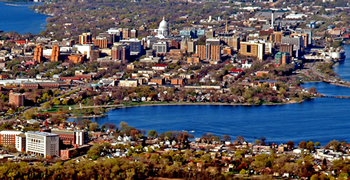 I’m on my way to Madison, Wisconsin, and I hope you are too, and not just for the beer and (veggie) bratwursts.  Here are seven other good reasons:

·      Marking the bombings of Hiroshima and Nagasaki together with opponents of war.

·      The opening of Dirty Wars with after-screening talks with Jeremy Scahill.

·      The daily singing and protesting in the state capitol!

Activists are converging on Madison, allowing for cross-fertilization and creative planning of future actions for peace and justice in the United States.  I recently invited Roshan Bliss of the Student Power Convergence, Ben Manski of Democracy Convention, and Doug Rawlings of Veterans For Peace to discuss these events on my radio show, Talk Nation Radio.  Click and take a listen.

The town hall on impeachment is, I think, the first of its kind I will speak at since Obama moved into the White House and began continuing the crimes for which a majority of Americans in various polls favored Bush’s impeachment.  It’s not that I’ve turned down other invitations.  It’s not that I haven’t been invited.  This is the first Impeach Obama (for sane reasons) meeting I’ve heard of.  Check it out.  Also speaking: Coleen Rowley, Debra Sweet, Buzz Davis, Don McKeating, Joe Elder — and you if you can make it.

The VFP Convention is the 28th such event.  Veterans For Peace, a leading antiwar organization with members in every U.S. state and several other countries, will hold its 28th national convention at the Concourse Hotel at 1 Dayton Street.  The convention, open to veterans and non-veterans, will feature speakers, entertainers, and workshops on a wide variety of topics related to the advancement of peace and the abolition of war.

Speakers at the VFP convention include:

Entertainers at the convention will include Lem Genovese, Ryan Harvey, Solidarity singalong, Forward Marching Band, Madison Raging Grannies, Watermelon Slim, Honor Among Thieves, Jim Walktendonk. Also Regis Tremblay will be screening his new film The Ghosts of Jeju. A drones quilt will be displayed during the convention.

Workshops at the VFP convention will include such topics as: Veterans farming, Creating a culture of peace, Educating the community, Agent Orange, Nonviolent bioregional revolutionary strategies, Debt and death: making clear the costs of war, Labor’s role, Environmental disaster, the United Nations, Helping homeless veterans, Palestine, Veteran suicide, Military sexual trauma and suicides, Voices of Iraq: resolution, reconciliation, reparation, The written word for peace and reconciliation, Bradley Manning and G.I. resisters, The perversion of just war reasoning, U.S. policy in the Middle East, The long war for central Asia, Building peace in Vietnam, and Abolishing war as an instrument of national policy.  The full program is available at http://VFPNationalConvention.org

Gar Alperovitz who authored an important book on the decision to drop the nuclear bombs on Japan will be in town, but he’ll be speaking at the Democracy Convention on the topic of worker ownership and how people can create enough power to fix our broken democracy. He recently discussed his new book on Talk Nation Radio. Take a listen.  Peter Kuznick, another great writer on the nuclear decision, currently in Japan with Oliver Stone, was also a recent guest. Listen here.

The Democracy Convention is a real movement and coalition building project pulling together activists from a wide variety of sectors to find strength and inspiration in numbers.  Several conferences will overlap and interact, including:

The Race and Democracy Conference.

The Education for Democracy Conference.

Think for a minute about who you’d most like to see leading conferences on those topics.  Then click the links, and in most cases I think you’ll find that they are doing so! We hope you can join us!

“You’ve seen the images and reports of the mass protests in Madison. The Wisconsin uprising was the first wave of the global anti-austerity protests to arrive in the United States. But it should be no surprise that Madison, Wisconsin, is at the center of the national movement against corporate power and economic austerity.

“Since Wisconsin statehood, in the revolutionary year of 1848, Madisonians have led the way, co-founding and leading the National Organization for Women (NOW), United States Student Association (USSA), United Students Against Sweatshops (USAS), Sierra Club, American Federation of State County and Municipal Employees (AFSCME), Women’s International League for Peace and Freedom (WILPF), and four national political parties: the early, radical Republican Party, and then later, the Progressive Party of the 1920-30s, and the New Party and Green Party. Madison, Wisconsin, has long served as the capital city of the heartland of the progressive movement.

“Today, the Madison Common Council and Dane County Board are populated with progressive alders and supervisors, and a newly returned mayor, Paul Soglin, famous for his progressive leadership as mayor in the 1970s. Madison is a labor city with a very high density of union membership, as well as a center of the cooperative and credit union movements; nearly half the population of Madison belongs to some form of cooperatively owned and operated economic enterprise.

“If you’ve ever visited Madison in late August, you know you’re in for great weather in a wonderful city. Join us this August 7-11 in downtown Madison, near the now world-famous Wisconsin State Capitol, easily one of the most stunning buildings in North America. In visiting, you will have the opportunity to take part in our downtown farmers market, one the world’s largest, and the nation’s oldest. You can also take some time off on the shores of one of Madison’s four (or five, depending on how you count them) major lakes. If you’ve been wanting to return to Madison and Wisconsin, or to visit for the first time, August 7-11 will be the time to do that.”