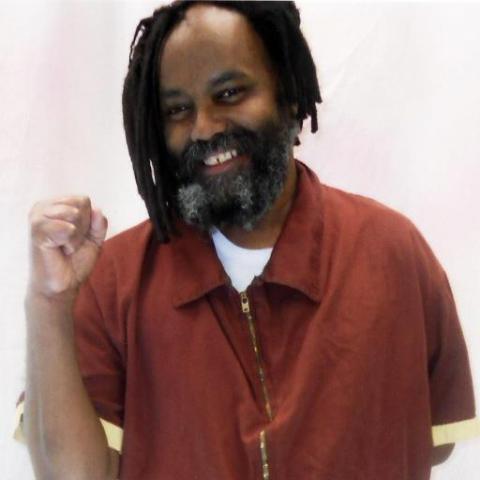 Yes, I also want to say Free Mumia. In fact, I want to say Free all the prisoners. Turn the prison holding Mumia Abu-Jamal into a school and make him dean. And if you won’t free all the prisoners, free one who has been punished to a level that ought to satisfy any retributive scheme for any crime he might have committed. And if you won’t do that, free him because he was put into prison by a fraudulent and corrupt trial that hid as much evidence as it revealed, and fabricated the latter.

More importantly, Read Mumia. His new book is called Writing on the Wall: Selected Prison Writings of Mumia Abu-Jamal, and it includes commentaries by Mumia from 1982 through 2014. Mumia went ahead and made his prison a school — a school in history, in politics, and in morality. And his own moral teaching is primarily by example. He teaches the liberating lesson that, if you so choose, you can know right now that never ever will anyone be able to beat you down. You can be cheerful for the rest of your life and rest completely assured that nothing can ever take that away.

Why? Because Mumia was shot and beaten within an inch of his life by the police, who then tried to kill him in the hospital with cold air meant to bring death by pneumonia. Then he was framed up and railroaded into a “correctional” institution. Then he was subjected for as long as perhaps anyone alive to the torture of solitary confinement (which drives some to self-mutilation). He was essentially mock-executed twice with dates set for his murder by the state of Pennsylvania. And it’s never let up, with a new effort to kill him through denial of medical care this year.

Yet from day-1 in prison to this day, Mumia has been creating written and radio commentaries that go after every injustice in the world, including those committed by the very prison guards who threaten his life. And one cannot find a word of self-pity in any of them. Nor a word of self-indulgence or of narrow focus. From behind bars, Mumia sees the global perspective better than most on the outside. He takes on the war machine as determinedly as poverty and draws the connections between them. With no fear. No bitterness. No paranoia. No despair. No let up. And no lack of love and understanding.

And that’s not primarily why you should read Mumia. He’s not a great wrongly-imprisoned-black writer. He’s a great writer. And if he were free and on book tour, chances are certainly better that you would be reading him. Mumia’s commentaries from prison are as informed and more insightful than many from academia. And less compromising — Compromising being something he takes on effectively with his critiques of what W.E.B. Dubois called the Philadelphia Negro.

If you want a sports score on Mumia’s insights, how about a list of accurate predictions?

He predicted the acquittal of George Zimmerman in the murder of Trayvon Martin.

He predicted Colin Powell’s performance long before his U.N. speech: “[A]s he has done all of his professional, military life, the General will follow the orders he’s given, even if he is in disagreement with them.” —Aug. 30, 2001

He predicted war disasters before the wars. He predicted who George W. Bush and Barack Obama would be prior to Bush’s selection and Obama’s election (and nailed the theft of Florida for Bush in 2000 before it was completed). Of Obama he said:

“Black faces in high places does not freedom make. Power is more than presence. It is the ability to meet people’s political objectives of freedom, independence, and material well-being. We are as far from those objectives as we were in 1967.” —Aug. 6, 2008

Mumia got Hillary Clinton right before she was even a senator, never mind before, as president, she started World War III:

“The Democratic senatorial candidate Hillary Clinton, in the aftermath of the Diallo killers’ acquittal, issued a statement to the effect that ‘police officers should work to understand the community, and the community should understand the risks faced by police officers.’ This in the afterglow of a whitewash quasi-prosecution and acquittal of four cops who glocked Diallo to death in his doorway for committing the capital crime of ‘standing while black.’–SWB. This in studied political reflection of a case where cops fired 41 shots at an unarmed man!” —March 13, 2000

Mumia answered “Why do they hate us?” on September 17, 2001. He got the Cuban Five right before they were freed. He got Black Lives Matter before leaders of that movement were born. He got Distant Lives Matter too, also right, before that movement was even born, if it ever is.

Mumia even addressed Bill Cosby with appropriate contempt decades before that was cool.

Mumia above all has been a leading voice in helping to end the death penalty, and he has urged on and celebrated each step in that direction.

Mumia knows what is happening better from behind bars than do many on the outside, because he has access to books. He once recorded this radio review of one of my books, which I considered superior to any other review.

Those of us outside of prison have access to books, too, although many seem to forget it. We could all be as well-informed as Mumia. We could all know what’s coming next before it hits us in the face. A good place to start would be by reading the Writing on the Wall.