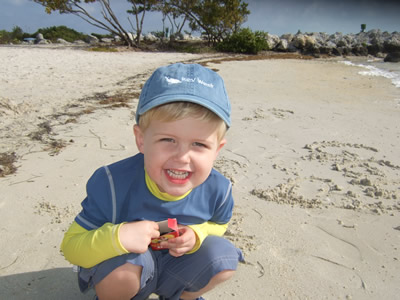 Way back in January, the ocean was still ocean, oil still oil, and combining the two had not yet occurred to us.  The Conch Republic, the Florida Keys, was — in retrospect — a secure and pristine paradise.

The danger was of sunburn, not of crude oil on your skin or toxic chemicals in the air you breathed.

So we went to the Florida Keys Wild Bird Center. 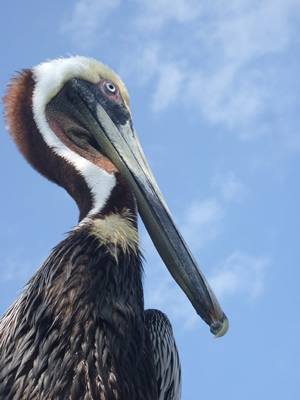 Well, it turns out that pelicans know what time it is.  And if someone hands out buckets of fish on the shore at the same time every day, any pelican in the greater metropolitan area is going to be there right on time.

And that’s what they do there on Tavernier Key.  They know the pelicans.  They tag them.  They doctor injured ones.  And, if they want to check on how they’re doing, all it takes is several buckets of fish and predictable timing.

The pelicans didn’t have everything perfect, even pre-oil.  The effects on the weather of our burning of oil we’re hitting the pelicans hard before the oil itself hit the water.  These birds require a finely calibrated climate.  They migrate from the U.S. gulf coast to the Keys with the seasons.  And they need fish, fresh, healthy fish, and lots of it.

When the weather goes freaky with unusually cold or hot or dry periods, and when fish die, the pelicans are in danger too.  We just didn’t know how good they had it before BP-USA dipped them and their world in oil.

At lunchtime, hundreds of pelicans show up with one thing on their minds: 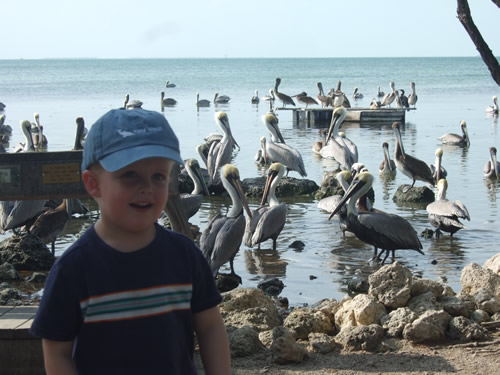 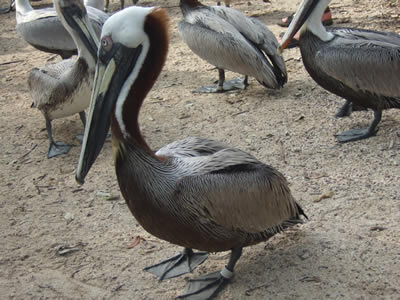 If you watch CNN you’ll see heartwarming stories of how purchasing the proper brand of dishwashing soap at your local supermarket will contribute to the work of washing the pelicans off before dipping them back in the oil to die.  Not to put too fine a point on it, this is horseshit. 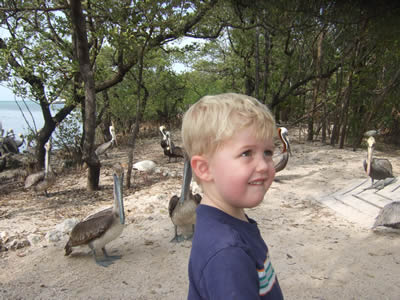 There will be no more human enjoyment of the pelicans if this continues, and no more pelican enjoyment of anything at all.  They will be gone, along with the world they lived in.

This does not strike me as yet another ho-hum project for the president to create a commission on or the oil baron primarily responsible to be annoyed by when he’s not yachting in another ocean. This is the worst damage we have yet imposed on the earth, an ongoing explosion of black liquid death pumping into paradise, and we’re taking it all pretty coolly. 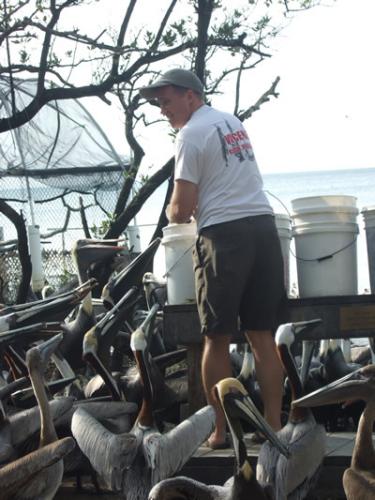 What would the pelicans do? When they want something, they don’t hesitate.  If you don’t toss them the fish fast enough, they grab your legs.  If that doesn’t work, they try to knock the bucket over.  These are birds on a mission to survive.  We’re on a mission to nap.

What should we be doing?  Not yachting.  Not golfing.  Not deferring as people to our government or as Congress to a president or as that president to the criminals responsible.

There should be an all-out night-and-day effort to stop this oil gusher.  The national guard should be brought home to guard the nation.  The trillions of dollars being put into wars for oil should be reinvested (ending the wars) into a war against the oil we do not want and cannot survive, and into an all-out crusade to create a renewable energy economy.

The oil should be claimed by our nation, and our nation should seize the assets of the company responsible.

The state of Delaware should decharter the US branch of BP.

BP and the government regulators who did not regulate it should be prosecuted.

The military and the rest of the government should end all contracts with BP.

All offshore drilling should be banned.

All restrictions on journalists in the Gulf of Mexico should be lifted.

Corporations should be denied their dangerous status of possessing the privileges of people with none of the responsibilities.

If anyone should be given the protections afforded flesh and blood people, it is the pelicans.