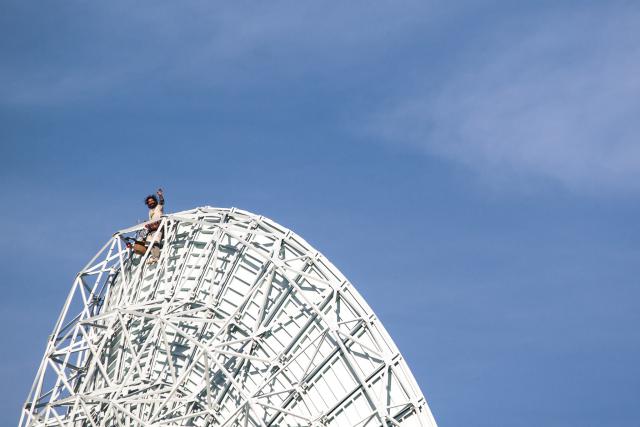 Credit to Fabio d’Alessandro for the photo and alerting me to the story, reported in Italian at Vice and Meridionews.

On the morning of Armistice Day, November 11, 2015, longtime peace activist Turi Vaccaro climbed to where you see him in the photo above. He brought a hammer and made this a Plowshares action by hammering on the enormous satellite dish, an instrument of U.S. warfare communications.

The primary contractor and profiteer building the satellite equipment at the U.S. Navy base in the desert in Sicily is Lockheed Martin Space Systems. Each of the four MUOS ground stations is intended to include three swivelling very-high-frequency satellite dishes with a diameter of 18.4 meters and two Ultra High Frequency (UHF) helical antennas.

Protests have been growing in the nearby town of Niscemi since 2012. In October 2012, construction was suspended for a few weeks. In early 2013 the President of the Region of Sicily revoked the authorization for the MUOS construction. The Italian government conducted a dubious study of health impacts and concluded the project was safe. Work recommenced. The town of Niscemi appealed, and in April 2014 the Regional Administrative Tribunal requested a new study. Construction goes on, as does resistance.

“It is very sad,” said D’Alessandro,”to realize that in the United States people know little about MUOS. MUOS is a system for high-frequency and narrowband satellite communications, composed of five satellites and four stations on earth, one of which is planned for Niscemi. MUOS was developed by the U.S. Department of Defense. The purpose of the program is the creation of a global communications network that allows communication in real time with any soldier in any part of the world. In addition it will be possible to send encrypted messages. One of the principal functions of MUOS, apart from the speed of communications, is the ability to remotely pilot drones. Recent tests have demonstrated how MUOS can be used at the North Pole. In short, MUOS will serve to support any U.S. conflict in the Mediterranean or the Middle East or Asia. It’s all part of the effort to automate war, entrusting the choice of targets to machines.”

“There are many reasons to oppose MUOS,” D’Alessandro told me, “first of all the local community has not been advised of the installation. The MUOS satellite dishes and antennas are built within a non-NATO U.S. military base that has existed in Niscemi since 1991. The base was constructed within a nature preserve, destroying thousands of cork oaks and devestating the landscape by means of bulldozers that leveled a hill. The base is larger than the town of Niscemi itself. The presence of the satellite dishes and antennas puts at serious risk a fragile habitat including flora and fauna that exist only in this place. And no study has been conducted of the dangers of the electromagnetic waves emitted, neither for the animal population nor for the human inhabitants and the civilian flights from the Comiso Airport approximately 20 kilometers away.

“Within the base there are already present 46 satellite dishes, surpassing the limit set by Italian law. Moreover, as determined anti-militarists, we oppose further militarizing this area, which already has the base at Sigonella and other U.S. bases in Sicily. We don’t want to be complicit in the next wars. And we don’t want to become a target for whoever attempts to attack the U.S. military.”

What have you done thus far, I asked.

“We’ve engaged in lots of different actions against the base: more than once we’ve cut through the fences; three times we’ve invaded the base en masse; twice we’ve entered the base with thousands demonstrating. We’ve blocked the roads to prevent access for the workers and the American military personnel. There has been sabotage of the optical communication wires, and many other actions.”

The No Dal Molin movement against the new base at Vicenza, Italy, has not stopped that base. Have you learned anything from their efforts? Are you in touch with them?

“We are in constant contact with No Dal Molin, and we know their history well. The company that is building MUOS, Gemmo SPA, is the same that did the work on Dal Molin and is currently under investigation subsequent to the seizure of the MUOS building site by the courts in Caltagirone. Anyone attempting to bring into doubt the legitimacy of U.S. military bases in Italy is obliged to work with political groups on the right and left that have always been pro-NATO. And in this case the first supporters of MUOS were the politicians just as happened at Dal Molin. We often meet with delegations of activists from Vicenza and three times have been their guests.”

I went with representatives of No Dal Molin to meet with Congress Members and Senators and their staffs in Washington, and they simply asked us where the base should go if not Vicenza. We replied “Nowhere.” Have you met with anyone in the U.S. government or communicated with them in any way?

“Many times the U.S. consuls have come to Niscemi but we have never been permitted to speak with them. We have never in any way communicated with U.S. senators/representatives, and none have ever asked to meet with us.”

Where are the other three MOUS sites? Are you in touch with resisters there? Or with the resistance to bases on Jeju Island or Okinawa or the Philippines or elsewhere around the world? The Chagossians seeking to return might make good allies, right? What about the groups studying the military damage to Sardinia? Environmental groups are concerned about Jeju and about Pagan Island Are they helpful in Sicily?

“We are in direct contact with the No Radar group in Sardinia. One of the planners of that struggle has worked (for free) for us. We know the other anti-U.S.-base movements around the world, and thanks to No Dal Molin and to David Vine, we have been able to hold some virtual meetings. Also thanks to the support of Bruce Gagnon of the Global Network Against Weapons and Nuclear Power in Space we are trying to get in touch with those in Hawaii and Okinawa.”

What would you most like people in the United States to know?

“The imperialism that the United States is imposing on the countries that lost the Second World War is shameful. We are tired of having to be slaves to a foreign politics that to us is crazy and that obliges us to make enormous sacrifices and that makes Sicily and Italy no longer lands of welcome and peace, but lands of war, deserts in use by the U.S. Navy.”