“President Kennedy warned Americans not to see conflict as inevitable. It is time to apply such wisdom.” —President Obama #IranDeal

Indeed it is. But President Obama’s speech did not entirely convey the same message as Kennedy’s famous address at American U in which Kennedy advocated disarmament and international understanding. In fact it had echoes of a far less admired former official: 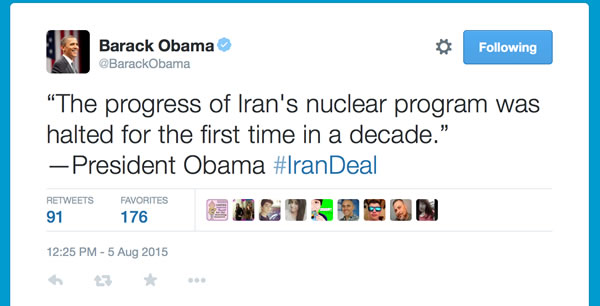 The above tweet by President Obama came in the midst of a flood of tweets about Iran pursuing a nuclear bomb, including these:

“This deal shuts off the type of covert program Iran has pursued in the past.” —President Obama #IranDeal

“Even before taking office, I made clear that Iran would not be allowed to acquire a nuclear weapon on my watch.” —President Obama #IranDeal

“The question then is not whether to prevent Iran from obtaining a nuclear weapon, but how.” —President Obama #IranDeal

“This deal is not just the best choice among alternatives—this is the strongest non-proliferation agreement ever.” —President Obama

Except, of course, for the Nonproliferation Treaty! if its parties were to comply with it. (I’m looking at you, President Obama.)

The President’s tweets — tweeted by someone other than the President of course — came during a speech he gave at American University, from which a transcript will likely be posted on the White House website.

Obama might claim he was only suggesting he’d halted a nuclear ENERGY program, but the reader who would put that interpretation on his statement, and combine it with an understanding that Iran’s program has been exclusively for energy, has got to be rare, given the propaganda being pushed by Obama, his supporters, and his opponents.

Remarkably, neither the advocates of war, nor the momentary fans of diplomacy, will point out that Iran has never threatened the United States and has no nuclear weapons program.

Obama is also to be praised for preferring — for once — to use diplomacy instead of war. And he is to be praised highly for suggesting that the alternative to diplomacy is in fact war, and for discussing war as the undesirable evil it is. But Obama ought to be pointing out that the purpose of the diplomatic deal is in fact just that: to prevent a U.S. war. Instead he claims the purpose is to prevent an Iranian threat.

In the long run, this kind of talk doesn’t help prevent a war.

Let’s demand that our Senators defend the deal. Let’s tell them we want to prevent a war. Let’s make clear we’re aware who is openly threatening war: they are.

Watch Senator Kaine, who has taken the lead in speaking out for the deal. He says that if Iran fails to comply with the deal, the U.S. can still (illegally, immorally, disastrously) launch a war. That threat — the threat itself alone — is a violation of the UN Charter and basic human decency. And that threat comes from our elected leader now heading up the cause of peace in the U.S. Senate.