Medea Benjamin will speak at Random Row Books in Charlottesville, Va. at 7 p.m. on Friday, May 4th. 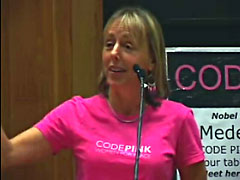 Free. Open to the Public.

Medea Benjamin is cofounder of Global Exchange and of CodePink: Women for Peace.  She is the author of the new book “Drone Warfare: Killing by Remote Control” and was an organizer of the Drone Summit held this past weekend in Washington, D.C.

Benjamin was forcibly removed on Monday from a speech by White House Counterterrorism Advisor John Brennan, who defended the use of drones to kill in Pakistan, Afghanistan, and Yemen.

And on Democracy Now!
http://www.democracynow.org/2012/4/27/as_obama_expands_drone_war_activists

Associated Press: “Pakistan on Monday condemned a U.S. drone strike that killed three suspected Islamist militants in the northwest, the first since the country’s parliament demanded that Washington end the attacks two weeks ago.”
http://abcnews.go.com/International/wireStory/red-cross-british-worker-killed-pakistan-16237610#.T6AMG47W-D4

The FAA has released a list of drone certificates.  Drones are being flown by the military, by police forces, by drone companies, by universities, small towns, and counties.  (Read more at the link.)