It’s a good thing he doesn’t have a job that requires knowing what the people of Virginia think about anything. 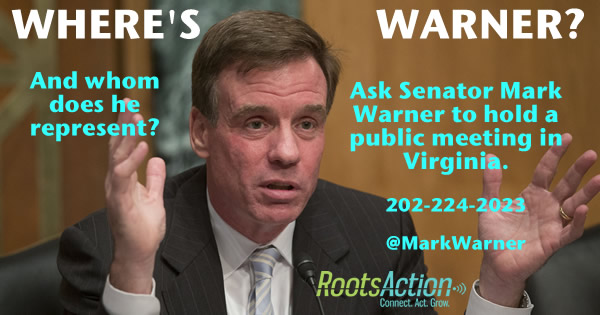 Virginians can click here to ask Warner by email to appear in public.

It’s hardly an unreasonable demand. While Congress is on summer break, most senators and representatives attend publicly announced public meetings at which they speak about their work and hear comments from, and answer questions from, their constituents.

Warner could play a decisive role in upholding or rejecting the Iran deal (on which he has taken no public position), the Trans-Pacific Partnership, the Atlantic Coast Pipeline, and all sorts of other projects of critical interest to the people of Virginia.

On the Iran agreement, Warner is on a shrinking list of Democratic senators who continue to maintain the pretense that they’re carefully reviewing the data on whether peace or war is preferable.

On the Atlantic Coast Pipeline, rumor has it that Warner will be meeting behind closed doors to discuss imposing that inevitable disaster on Virginians.

The TPP itself is secret because, in the view of several who have seen it, if it were to appear openly the public would never stand for it. Maybe Warner has the same idea for himself.

Shouldn’t he want to know what Virginians think?

Please forward this message to your friends in Virginia. Please phone and tweet Warner if you’re from Virginia, and email him here.