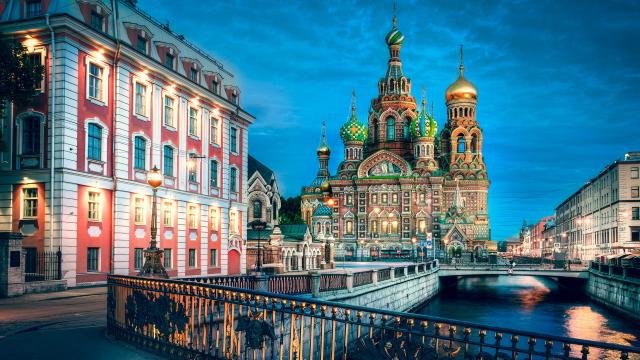 In the early 1980s almost nobody from the United States traveled to the Soviet Union or vice versa. The Soviets wouldn’t let anybody out, and good Americans were disinclined to visit the Evil Empire. But a woman in California named Sharon Tennison took the threat of nuclear war with the seriousness it deserved and still deserves. She got a group of friends together and asked the Russian consulate for permission to visit Russia, make friends, and learn.

Russia said fine. The U.S. government, in the form of the FBI and USAID, told them not to go, warned that they would not be permitted to move freely once there, and generally communicated that they, the U.S. government employees, had internalized their own propaganda. Tennison and company went anyway, had a wonderful experience, and spoke at events with slide shows upon their return, thus attracting many more people for the next trip.

Now it was Tennison’s turn to brief the flabbergasted and ignorant U.S. government staff who had virtually no actual knowledge of Russia beyond what she gave them. This was back in the day when President Ronald “Is this a film or reality?” Reagan said that 20 million dead Americans would be acceptable in a war. Yet the so-called intelligence so-called community didn’t know its assets from its elbows. War as a “last resort” was being considered without having considered literally any other resorts. Someone had to step in, and Sharon Tennison decided she’d try.

Those first trips took courage, to defy the U.S. government, and to operate in a Soviet Union still monitored by a nasty KGB. But the Americans went with friendship, were generally permitted to go wherever they wanted, and encountered friendship in return. They also encountered knowledge of cultural differences, the influences of history, political and social habits both admirable and lamentable. They became, in fact, a bridge between two worlds, experts on each for the other.

They expanded their work as Gorbachev came to power and the USSR opened up. They hired staff and opened offices in both countries. They sponsored and facilitated all variety of exchanges from art schools to Rotary clubs to police officers to environmentalists. They began bringing Russians to the United States as well as the reverse. They spoke all over the United States, even — in some examples Tennison gives in her book The Power of Impossible Ideas — converting gung-ho members of the U.S. weapons industry into volunteers and staff (in one case a man lost his job at General Dynamics as penalty for associating with them, but this freed him to more closely associate).

Tennison’s organization worked on sister cities, citizen diplomacy, alcoholics anonymous, and economic development. The latter would, over the years, become increasingly central and certainly focused on privatization and Americanization in a manner that might well be criticized. But it was not U.S. citizen diplomats who created the oligarchs of the 1990s or any culture of oligarch admiration. In fact, Tennison and her philanthropists made grants to Russians dependent on their making donations to others, working to build a culture of philanthropy. Alcoholics Anonymous can also be criticized, of course, but this was an effort to assist Russians with a real problem, not to threaten them with nuclear annihilation. All of these projects built relationships that have lasted and that have influenced U.S. policy for the better.

Through the 1990s, the projects evolved to include food and financial donations, orphanages, aid modeled on the Marshall Plan’s Productivity Tours, the creation of urban gardens and sustainable agriculture, and numerous business-training initiatives. Tennison met Vladimir Putin before he rose to power. She also met and advised top officials in the U.S. government. She accepted huge grants from USAID, the agency that had advised her never to begin her work. Of course, USAID has been involved in coups and hostile propaganda around the world, and a closer look at that problematic association might have been helpful in The Power of Impossible Ideas. But the work Tennison describes was all for the better, including taking U.S. Congressional leaders to dine in ordinary Russian homes. (I wonder how many current U.S. Congress members have done that.)

I can’t possibly recount all the amazing stories in Tennison’s book, which lives up to its vague and extravagant title; I strongly recommend you read it yourself. The critical development in the later chapters is the diversion Tennison encountered between reality and U.S. media. She found Putin to be a force for reconciliation, and the U.S. media to be intent on demonization — at least from the moment that Russia refused to participate in attacking Iraq in 2003.

Putin had tried to partner with the United States, challenging the demands of Russian hardliners. He allowed the U.S. to use Russian bases in Central Asia. He overlooked the United States withdrawing from the ABM treaty. He accepted NATO expansion right to Russia’s border. He supported, up to a point, the U.S. “war on terrorism.” Washington didn’t care.

“During the 2000s,” writes Tennison, “I watched as the reservoir of goodwill from the Gorbachev/Reagan years evaporated.” In 2004 the State Department cut off its funding for Tennison’s work. In 2006 the Council on Foreign Relations produced a report hostile toward Russia. That same year, Russia gave the United States the 10-story-tall monument that stands in Bayonne, New Jersey, but it was too late to have the U.S. media inform many people of it. In 2007, the U.S. was pushing to get Georgia and Ukraine into NATO. Now, following the Ukrainian coup, the U.S. is seeking “partnerships” with NATO for those nations. The U.S. also announced its plans to put Ronnie’s “Star Wars” into Poland and the Czech Republic, later changed to Poland and Romania.

Finally, Putin began pushing back, warning against aggression toward Russia. In 2007, Tennison brought a group of 100 Russians to Washington, D.C., to speak to Congress. But the hostility only increased. (By 2016 Pentagon staff would be openly saying the motivation of this hostility is bureaucratic and profit-driven.)

In 2008, Tennison and others in her organization launched a blog to correct bad U.S. media. But with tensions growing ever worse, Tennison has lately returned to where she started and begun taking groups of interested Americans to visit Russian cities and get to know members of the demonized foreign land. These trips are as badly needed as they were in the 1980s, though they may require less courage. In fact, what seems to me to require the most courage, or the greatest delusion, is to not participate in this potentially world-saving project.

Sharon Tennison provided this at the end of her book, so I assume it’s OK to copy it here: Reach out to her at sharon [AT] ccisf.org.

If you would like to learn more about Sharon’s organization, please visit the Center for Citizen Initiatives website.