U.S. District Judge George Daniels of New York has struck again, ruling that Iran must pay $10 billion to compensate for the terrorist attacks of September 11, 2001. If you have read this story in the United States, it probably came from Bloomberg News, which uniquely failed to note that in fact nobody has ever produced the slightest evidence that Iran had anything to do with the September 11 attacks.

If you read the story in Russian or British or Venezuelan or Iranian media or on sites that used the Bloomberg story but added a tiny bit of context, then you learned that Iran had, as far as anyone knows, nothing at all to do with 9/11 (a point on which the 9/11 Commission, President Obama, and pretty much everyone else are in agreement), that none of the al Qaeda hijackers were Iranian, that most of them were Saudi, that the same judge has exonerated Saudi Arabia and declared that nation to have sovereign immunity, that the ideology of al Qaeda puts it at odds with the Iranian government, that the $10 billion is very unlikely to ever change hands, and that — in short — this is a story about a crackpot judge operating within a crackpot culture, not a story about criminal justice.

Criminal justice is actually a much better response to 9/11 than endless war, but first you have to properly identify the criminals! 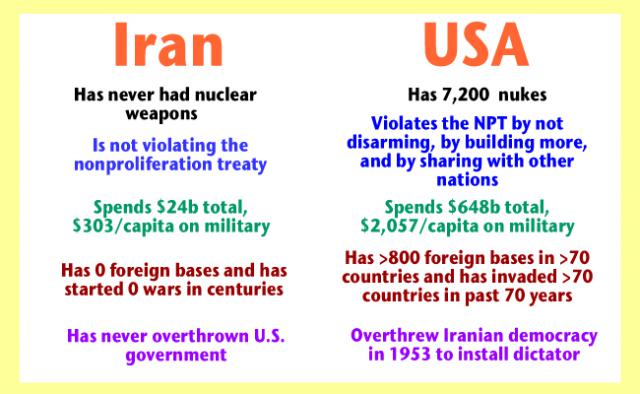 The same judge has done this before, and has based his decisions each time on the claims of ludicrous “experts” that go unanswered by any defense, as Iran declines to dignify such proceedings by showing up to defend itself. Five years ago, Gareth Porter, preeminent debunker of war lies about Iran, noted that in that year’s proceedings, “at least two of the Iranian defectors [appearing as witnesses, had] long been dismissed by U.S. intelligence as ‘fabricators’ and … the two ‘expert witnesses’ who were supposed to determine the credibility of those defectors’ claims [were] both avowed advocates of crackpot conspiracy theories about Muslims and Shariah law who believe the United States is at war with Islam.”

The power of U.S. judges has packed U.S. prisons with innocents, come down far more heavily on dark-skinned defendants, made money into speech, made corporations people, disenfranchised voters, and made George W. Bush president. It’s a bit too generous to suggest that Judge George Daniels’ actions are simply a matter of proper procedure. That he has other options than making a laughingstock of his country is illustrated by his very different treatment of Saudi Arabia. Daniels operates within a system that gives judges the powers of gods, and within a culture that demonizes Iran at every level.

The United States government has been promoting anti-Iranian propaganda for decades. This poison takes multiple and contradictory forms. Opponents of the recent nuclear agreement falsely claimed that Iran was building nuclear weapons. And many defenders of the agreement also falsely claimed that Iran was building nuclear weapons. Meanwhile, numerous false claims have in recent years been made about alleged Iranian terrorism, while the United States has in fact been sponsoring terrorism in Iran and openly committing the crime of threatening war on Iran. The recent elections in Iran show positive results of the agreement. The U.S. public, on the other hand, is in a worse place in terms of the credence it gives to anti-Iranian lies than it was prior to the nuclear negotiations. This is a grave danger, because many in Washington have not ceased pushing for war.

We’re going to see efforts in Congress to tear up the nuclear agreement, to impose new sanctions, and conceivably even to steal the billions of dollars to pay off this court settlement by “freezing” Iranian assets. Reports Bloomberg: “While it is difficult to collect damages from an unwilling foreign nation, the plaintiffs may try to collect part of the judgments using a law that permits parties to tap terrorists’ assets frozen by the government.”

Who is a “terrorist” of course is defined in the eye of the government official. The history of U.S. trouble with Iran dates significantly to the 1953 overthrow by the CIA of Iran’s democratic president, and the U.S. installation of a brutal dictator. The popular revolution that overthrew that dictator was hijacked by theocrats, and today’s Iranian government can be severely criticized in many ways. But Iran has spent decades opposing the use of weapons of mass destruction. When Iraq attacked Iran with U.S.-supplied chemical weapons, Iran refused on principle to respond in kind. Iran has not pursued nuclear weapons, and has repeatedly, prior to this agreement, including in 2003, offered to give up its nuclear energy program. It now subjects its energy program to greater inspections than any other country ever has or the United States ever would, going above and beyond compliance with the nonproliferation treaty that the United States flagrantly violates.

In 2000, as revealed by Jeffrey Sterling, the CIA tried to plant nuclear weapons evidence on Iran. Even as Iran offered to assist the United States, post 9/11, the United States labeled Iran part of an “axis of evil,” despite its lack of ties with the other two nations in the “axis” and its lack of “evil.” The United States then designated part of Iran’s military a terrorist organization, very likely murdered Iranian scientists, certainly funded opposition groups in Iran (including some the U.S. also designated as terrorist), flew drones over Iran, launched major cyber attacks on Iranian computers, and built up military forces all around Iran’s borders, while imposing cruel sanctions on the country. Washington neocons have also spoken openly about their intentions to overthrow the government of Syria as a step toward overthrowing the government of Iran. It may be worth reminding U.S. audiences that it is illegal to overthrow governments.

The roots of a Washington push for a new war on Iran can be found in the 1992 Defense Planning Guidance, the 1996 paper called A Clean Break: A New Strategy for Securing the Realm, the 2000 Rebuilding America’s Defenses, and in a 2001 Pentagon memo described by Wesley Clark as listing these nations for attack: Iraq, Libya, Somalia, Sudan, Lebanon, Syria, and Iran. In 2010, Tony Blair included Iran on a similar list of countries that he said Dick Cheney had aimed to overthrow.

One common type of war lie about Iran that has helped move the U.S. to the brink of war a number of times in the past 15 years is the lie about Iranian terrorism abroad. These tales have grown more and more outlandish. For the record, Iran did not try to blow up a Saudi ambassador in Washington, D.C., an action which President Obama would consider perfectly praiseworthy if the roles were reversed, but a lie that even Fox News had a hard time stomaching. And that’s saying something.

Why do some in the U.S. government think the rest of us will find outlandish war plots believable? Because they in fact engage in them. Here is Seymour Hersh describing a meeting held in then-Vice President Dick Cheney’s office:

“There was a dozen ideas proffered about how to trigger a war. The one that interested me the most was why don’t we build — we in our shipyard — build four or five boats that look like Iranian PT boats. Put Navy seals on them with a lot of arms. And next time one of our boats goes to the Straits of Hormuz, start a shoot-up. Might cost some lives. And it was rejected because you can’t have Americans killing Americans. That’s the kind of — that’s the level of stuff we’re talking about. Provocation. But that was rejected.”

Years later, a U.S. ship was apprehended by Iran in Iranian waters. Iran did not retaliate or escalate, but simply let the ship depart. The U.S. media treated the incident as an act of Iranian aggression.

Let all of this be a lesson — not of course to reject war lies — but to make proper accusations. If you’re caught robbing a house, accuse the homeowner of attacking your territory. Hope your case if brought before Judge Daniels. And send your legal bills to the Iranian government — they owe you!