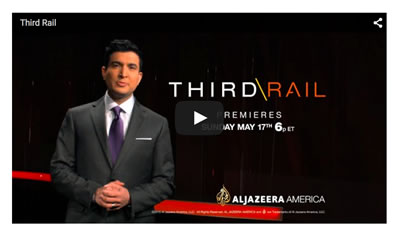 Some weeks back I got a call from Al Jazeera wanting me to be on a show, but insisting that I couldn’t do it from a local studio via satellite or from my computer via Skype. No, I would have to fly to New York and back, and they would pay for the flight and pay a “per diem” as well (they didn’t specify how much). I was not eager to take a whole day out of my life to fly to New York and back, but they sold me on it. This, they told me, would be the premier edition of a new Sunday morning news program to compete with the existing ones. And it would include different perspectives.

“This week, we are producing a debate on whether or not the ‘American empire is on decline’, and I would love to have you on the show to share your thoughts on the issue on this very exciting debate,” wrote a woman who turned out to be one of many producers, in an initial email. We exchanged emails and spoke by phone. I provided brief responses on several subtopics. I even wrote and published a column on the topic and sent it to them. Various Al Jazeera staff got in on the email thread. I also spoke by phone with executive producer Robert Lilly.

At the studio in New York, I found out just before the taping who I would be debating. She had apparently known about me as her debate opponent for some time. Her name was Tara Maller and she worked at the Aspen Institute with General Stanley McChrystal. She and some of the producers sitting in the waiting room seemed to compete with each other in dropping the names of horribly blood-soaked and ridiculously over-wealthy people they knew. It reminded me of waiting to go on Fox News more than, say, theRealNews.com.

The debate turned out to be something like 15 minutes. Host Imran Garda veered away from the declining empire topic to focus on the question of war. I found that shift welcome. I was delighted to explain my views on war in general and various specific wars, to the extent that one can do so in a few teeny sound bytes. Garda seemed surprised, however, that someone could actually oppose all wars. There may have been a memo he missed on that. Maller, for her part, did fine, but told me afterwards that I talked faster than she did, and remarked to one of the gaggle of producers how absurd it was for her to have played the role of war supporter. Of course, her views were her own and I would have welcomed it had she chosen to oppose war, but she was clearly more comfortable debating someone to her right who wanted more war than she did.

I thought the taping went well, such as it was. There were no glaring problems, and all sorts of executives and bigwigs shook our hands and thanked us. I thanked one of them for airing (I thought that the show would in fact be airing) something that the other networks would never air, and the look I got back disturbed me. I wondered whether they actually found that idea unpleasant. I flew back home on their dime. I started telling people that Al Jazeera was going to air something different from the norm of Sunday political TV.

I heard little from the Al Jazeera folks for some weeks. They’d been eager to know when I’d be back in New York, but when I told them they didn’t seem so interested anymore. I asked them about paying my “per diem” and they weaseled out of it with a claim that they would only pay for food and cabs with receipts. I’d given them a receipt for a cab when their car hadn’t shown up at La Guardia. They’d never hinted that I needed to get receipts for food or that that was what they meant by “per diem.” In the same email that included that weaseling, the out-of-the-loop producer who’d first contacted me said “I hope you got to watch the premier this past Sunday!”

That was odd. Nobody had told me it was going to be on or that they’d seen it. What good was this show if nobody saw it? I asked where the clip was online and got no response. Some days later I found a website for the show. Here it is: http://america.aljazeera.com/watch/shows/third-rail.html The show is called The Third Rail, but it’s not exactly electrifying. It’s the same old, same old, with Judith Miller and Alan Dershowitz and such types. The guests fit with the attitude I picked up on in the studio of wanting to be CNN. These videos don’t make for something worth announcing to the world as new and different from the usual gang of corporate hacks regurgitating talking points. The show I taped is not there.

I emailed the original producer who had been my main contact and CC’d a colleague she had been CCing. “I see you now have the show here http://america.aljazeera.com/watch/shows/third-rail.html with no sign of any debate that might question war,” I emailed. “On the contrary Judith Miller’s smiling face front and center. What’s up? I took an entire day out of my life to debate a war-proponent in teeny little sound bites and then you killed it? Your plan is to compete with Meet the Depressed and such shows by imitating them?”

“Sure,” I replied. “Why did you kill a program supposedly aimed at being different and including an anti-war point of view in order to air the same old slop from Alan Dershowitz and Judith Miller and all your typical Meet The Depressed style warmongering hacks? Was the other guest happy or upset to have the show killed? Did you tell her? Were you planning on telling me? Do you intend to ape the lousy existing shows but just have fewer viewers, or are you hoping to create something different?”

The phone rang. It was Katy. “If you have something to say . . . !” She quickly accused me of “badgering” and “threatening.” Whom was I threatening with what, how, and when? I asked her four or five times before she said “I’m not accusing you of threatening. I’m objecting to your tone.” (Picture someone screaming “I’m objecting to your screaming!”). Ignoring her tone, I asked her why they had killed the program and if they had intended to tell me. Her response: “It was a practice run, my dear. We thought we might use part of it.” She went on to say something about how they fully planned to include points of view from “your kind of advocates and causes.” You got the sense she was holding something at arm’s length with her nose pinched.

When I pointed out that I never would have come to New York for a practice run and had, needless to say, never been fed that line prior to this moment, she said she would have to speak with her colleagues about that. She ranted for a while about how she was a professional, and when I tried to say something she hung up.

Now, I don’t seriously think they flew people in for a practice run and lied to them about it. I think quite obviously they decided after filming the program, for whatever reason, that they preferred to air the stuff you’ll see on their website.

Was my performance or Muller’s Maller’s unsatisfactory in some sort of technical way? I doubt it. I was just like I was in the clips of me they’d seen before inviting me on.

Did I say the wrong things about Syria or the weapons industry or something else in particular? I doubt it.

My best guess is they didn’t want to be the show that premiers by doing something as laughable as opposing mass murder — you can’t touch such a third rail when you’ve already got the name Third Rail! But of course I’m just guessing. They won’t tell me. They would rather claim that they lied to me for weeks and couldn’t find anyone in the entire city of New York who could sit in for a “practice run.”