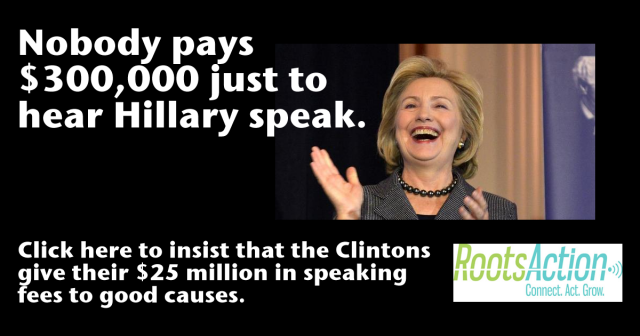 The United States’ 20 wealthiest people (The 0.000006 Percent) now own more wealth than the bottom half of the U.S. population combined, a total of 152 million people in 57 million households. The Forbes 400 now own about as much wealth as the nation’s entire African-American population — plus more than a third of the Latino population — combined; more wealth combined than the bottom 61 percent of the U.S. population, an estimated 194 million people or 70 million households.

These stats are from the Middle Ages and also from the Institute for Policy Studies which acknowledges that much wealth is hidden offshore and the reality is likely even worse.

What did those 20 wealthiest, most meritorious people do to deserve such disgusting riches? The group includes four Wal-Mart heirs, three Mars candy heirs, and two Koch brother heirs. They earned their wealth by being born to wealthy parents, just like some who want to work for them, such as Donald Trump. One politician is actually one of them: Michael Bloomberg.

These individuals could fund a total shift to clean energy or end starvation on earth or eradicate diseases. That they choose not to is murderous and shameful. It’s not their sacred right. It’s not cute. And it’s not funny when one of them pretends to give his money away by giving it to himself.

In the first phase of the 2016 Presidential election cycle, according to the New York Times, 158 wealthy donors provided half of all campaign contributions, 138 of them backing Republicans, 20 backing Democrats. No candidate can easily compete without huge amounts of money. And if you get it from small donors, as Bernie Sanders has done the most of, you’ll be largely shut out of free media coverage, and belittled in the bit of coverage you’re granted. The media coverage, the debate questions, and the topics discussed are determined by the interests of the wealthy in this national oligarchy.

Then there’s the corrupt foundation money and speaking fees flowing into the Clinton family from wealthy sources in the U.S. and abroad. While most Americans are unable to sit through a full presidential debate, Wall Street, Big Pharma, and corporate technology interests have shelled out hundreds of thousands of dollars supposedly just to hear Hillary or Bill Clinton speak.

According to a new report by Consortium News, Hillary Clinton took in $11.8 million in 51 speaking fees between January 2014 to May 2015. Bill Clinton delivered 53 paid speeches to bring in $13.3 million during that same period. That’s over $25 million total, largely if not entirely from wealthy parties with a strong interest in influencing U.S. government policy.

This system of rewarding former politicians is one of the great corrupting forces in Washington, DC, but the revolving door that brings such politicians back into power makes it many times worse.

According to the Washington Post, since 1974 the Clintons have raised at least $3 billion, including at least $69 million just from the employees and PACs of banks, insurance companies, and securities and investment firms.

According to the International Business Times, the Clintons’ foundation took in money from foreign nations while Hillary Clinton was Secretary of State, nations such as Saudi Arabia for which she then waived restrictions on U.S. weapons sales. (Also on that list: Algeria, Kuwait, the United Arab Emirates, Oman, and Qatar.) I brought this up on a recent television program, and one of the other guests protested that I was not, at that moment, criticizing Donald Trump. But, even if we assume Trump is the worst person on earth, what has he done that is worse than taking a bribe to supply Saudi Arabia with the weapons that have since been used to slaughter children in Yemen? And what does Trump have to do with bribery? He’s self-corrupted. He’s in the race because of the financial barrier keeping decent people out. But he hasn’t been bribed to act like a fascist.

The Wall Street Journal reports that during the same period, Bill Clinton was bringing in big speaking fees from companies, groups, and a foreign government with interests in influencing the U.S. State Department. Eight-digit donors to the Clintons’ foundations include Saudi Arabia and Ukrainian oligarch Victor Pinchuk. Seven digit donors include: Kuwait, Exxon Mobil, Friends of Saudi Arabia, James Murdoch (son of Rupert), Qatar, Boeing, Dow, Goldman Sachs, Wal-Mart and the United Arab Emirates. Those chipping in at least half a million include Bank of America, Chevron, Monsanto, Citigroup, and the Soros Foundation. And they don’t even get a speech!

Sign this petition:
We urge the Clintons to clear their corrupted image by donating their $25 million in recent lecture fees to organizations legitimately working for campaign finance reform, Wall Street reform, environmental protection, and peace.