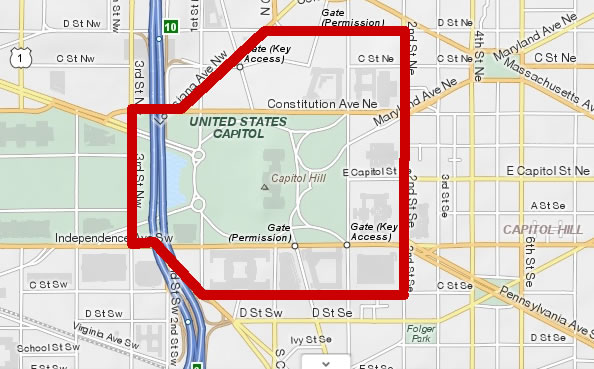 This is where I can’t go because I spoke.

And three of my friends got the same deal.

And in the next courtroom over our other friends were convicted by a jury of opposing torture.

And right across the hall our other friend completed her probation for having interrupted Netanyahu even though he thanked her and bragged about how she’d be treated worse in Iran, even though the assault she suffered in the US Capitol put her in a neck brace.

It was a great day for the First Amendment in Washington today.

Now, we’re only banned for 6 months, and we can get invitations in writing from Congress or the Supreme Court to come and protest them as a way around the ban (I wonder how that’s going to work).

We did happen to be in a Senate committee hearing when we spoke, but they were speaking quite endlessly about corporate trade agreements with Colombia, Panama, and Korea.  They said they’d try to help some of the people they threw out of work.  I asked why they didn’t just leave them their jobs. I was arrested.  Then they spoke a lot about Korean tariffs vs US tariffs on beef, and one of us criminals asked why we really needed to ship beef back and forth across the Pacific. Handcuffs on her.  This was in October.  Here we are in January finding out what is to be done to us to protect the Homeland.

It turns out we’re not a threat to the Homeland at all, just to one little hill.