The House and Senate have rammed through Fast Track.

Here are the senators who voted for Fast Track: http://1.usa.gov/1GtAdTH

And the House members who voted for Fast Track: http://1.usa.gov/1GAl1TT

We always said this would virtually guarantee passage of the Trans-Pacific Partnership. But it doesn’t absolutely guarantee it.

One way to stop it would be to pull out a seldom-used tactic in the United States that is indispensible in other nations. We could threaten consequences at the polling place for TPP supporters.

Yes, yes, yes, yes, I know — No, not kidding, I actually know — that in some small percentage of cases this could end up meaning that you’ve committed to voting against someone who faces in a future election someone else who looks even worse. But fear of that has in fact produced a pattern of, in fact, worse candidates followed by even worse candidates for years now. How, pray tell, do you propose to ever get any better candidates?

The TPP is a disaster that towers over considerations of gentility and lesser-evilism. This is Congress, as our supposed representatives, giving the power to overturn its own laws to corporations. Why would you care whom you elect to a body that no longer has the power to make laws? It’s already given up the power to stop wars.

The TPP is NAFTA on steroids, economically and environmentally destructive at home and abroad. Most of it has nothing to do with trade, but is rather about empowering banks and corporations with powers that couldn’t be passed separately or transparently because they’re too terrible and unpopular.

It’s time we take a stand against wrecking the world, even with corrupt politicians who can find someone slightly more corrupt to run against.

It’s time we signed this petition: 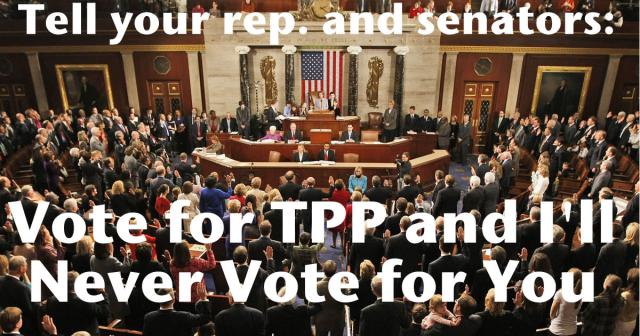