I wrote this over nine years ago and have now been married for 10 years, and none of the things I was worried about have left our society. But none of them have bothered me. The only thing that bothers me in rereading this is how much I bought into all the warnings about marriage being hard work. Um, when does the hard work start?

May 30, 2000, will be Anna’s and my first wedding anniversary, on which we’ll finish the cake that’s been in our freezer for nearly a year now. I’m still thrilled with being married, and I recall the wedding and the days around it as a wonderful time. I hesitated to get married, perhaps for some of the same reasons that others choose not to get married today. I was wrong to worry. Getting married was the best thing I’ve ever done.

It’s not that I had any serious doubt that I could and would love Anna and only Anna for the rest of my life. Rather, one reason for my hesitation came from a misplaced desire for independence, a desire to do what I wanted on my own (or, rather, the two of us on our own) even if it happened to be exactly what society has traditionally approved of. I know that divorce rates are high now in this country. I know that popular culture, much more so than scientific surveys, depicts infidelity as commonplace, virtually as inevitable. (After all, I got married in the Year of Monica.) Those things didn’t discourage me from getting married. But I did consider the possibility of making our commitment an informal and non-legal matter, of skipping the ceremony and the paperwork.

I had no doubts about the desirability of spending my life with Anna. I have seen immense joy in my family and other families arising from long marriages – joy that my marriage has already brought to me and Anna. I knew that I wanted to spend my life with this person and enjoy the family-related benefits, the grandparent visits, the handing down of family traditions. I have found in my relationship with Anna an increasing wealth of shared memories, combined with excited expectations of a shared future. I can rely on her love, though it is always changing and growing, and I can rely on her accepting my love.

But why did we need to have a ceremony and sign forms? Did we not trust ourselves to work through the rough spots to make our relationship last unless we promised to do so in front of a bunch of people? With similar promises being broken all the time around us, why should we bother with one? Part of the answer as I saw it was that, yes, we would work harder and have more people help us in doing so. More importantly, Anna and I wanted the involvement of our friends and families (our one enlarged family!) in our joy, we wanted them to be there as a part of the marriage, not as enforcers of it.

I expect hard times, and we have had hard times. We had them even before we married, and even before we lived together pre-marriage. I’m willing to work at it, because the knowledge people have gained over the millennia teaches the advantages of doing so. And I am, I think, humble enough to allow others to help us in this if they can possibly do so.

But I must confess that so far it doesn’t feel like work at all, and promoting marriage to others isn’t really fair because nobody else will have Anna for a wife. As far as I can see, everybody else is getting a bum deal. I’ve never met anyone as cheerful, kind, forgiving, loving, understanding, intelligent, caring and creative as Anna. If I hadn’t met her, I wouldn’t be writing any of this. And yet I’m willing to allow the sliver of a possibility that other people see something like Anna in their lovers or spouses, and also to allow the slight possibility that I matured enough to be ready for marriage and wouldn’t have been capable of meeting Anna some years ago.

There were various other reasons why I hesitated to get married, concerns which I now think were misguided. For one thing, I was bothered by the historical tradition of marriage, which for so long was to various degrees a proprietary transaction between a young woman’s father and the man who was to be her new master. There’s hardly a detail in the traditional wedding ceremony that lacks a beastly origin. The best man originated as the best man to help kidnap a girl from a neighboring village. Carrying her over the threshold originated in forcible abduction. The honeymoon was a period of hiding from angry relatives. The “giving her away” by the bride’s father speaks for itself. Anna and I had to work out the details of our ceremony so that we were comfortable that they did not draw on this tradition. We were able to do so, and at the same time to have our ceremony be very much a traditional one. Marriage is far from unique among common practices in having evolved through the ages, and marriage has much more good in its history than evil.

For someone interested in politics as much as I am, there was also the concern that by getting married I would be implicitly sharing the position of those who loudly defend marriage against change. If marriage is the wonderful thing that I believe it is, then I favor allowing it for as many people as possible, including gay people. If families are the wonderful things that I believe they are (though Anna and I have yet to take that next step), then I favor allowing them for homosexuals, for single individuals, and for groups of more than two happy consenting and committed adults. If approving of marriage and families to that degree was going to count as approving of them too much, then hadn’t I better just not take part? How could I choose to associate my love for Anna with a practice marked by what I saw as bigotry?

I decided that this way of looking at it was wrong, and that participating in marriage is hardly in conflict with trying to expand and improve on it.

I had hesitations about both the religious and the civil sides of getting married. Anna and I are not religious, and yet we could not imagine our wedding ceremony anywhere but in a church. And we didn’t want a judge whom we’d never met before to marry us, which would have made it seem to us more like registering a car or agreeing to a probation condition than like the blending of two families and two lives. My father is not religious either, but many years ago he was. In fact he was a preacher. He was able to perform a ceremony that we wrote ourselves. My mother played the organ. Anna’s parents and other friends and relatives read aloud. My grandfather sang. And the man whom my twin sister would shortly marry did the photography. It couldn’t have been better. We spent two days, before and after the wedding, with our family and friends. The weather was perfect.

Marriage need not be religious at all, but can be a part of any religion you choose. Since fundamentalists have a higher divorce rate than atheists, the association of marriage with religion is not as strong as it once was, at least if marriage is still thought of as something that lasts for life.

I also worried about the legal aspect of marriage, about making my relationship with Anna a matter of courts and police and everything that is part of our government. If I got married I’d pay less car insurance and be less likely to be falsely suspected of crimes. (Remember that single man in Atlanta who was accused of bombing the Olympics?) I didn’t like the idea of being judged in these ways on the basis of my marriage.

I decided that this worry was also a mistake. I am a part of this state and this country. I vote, pay taxes, and otherwise participate with people on that scale. Why should I be such an isolationist when it comes to the matter of love? When the ring on my finger seems to elicit respect from people, I don’t resent it. I see in it a knowledge of the secret, the wide-open secret that people have been talking about for centuries, and which I learned about last May. They are not calculating that I am statistically less likely to wreck my car. They are being made happy by knowledge of my happiness.

Sometimes I want to sing the words of a Gershwin song: “How long has this been going on?” The answer, of course, is a very long time. I’m a better person with Anna. She has not only made me happy, but improved me in countless ways. I have no doubt that she will be the best mother any kid ever had. One of the things we will enjoy sharing with our children is a videotape of a wedding ceremony last spring in which the most beautiful bride to ever be in such a ceremony for some strange reason was in one with me. 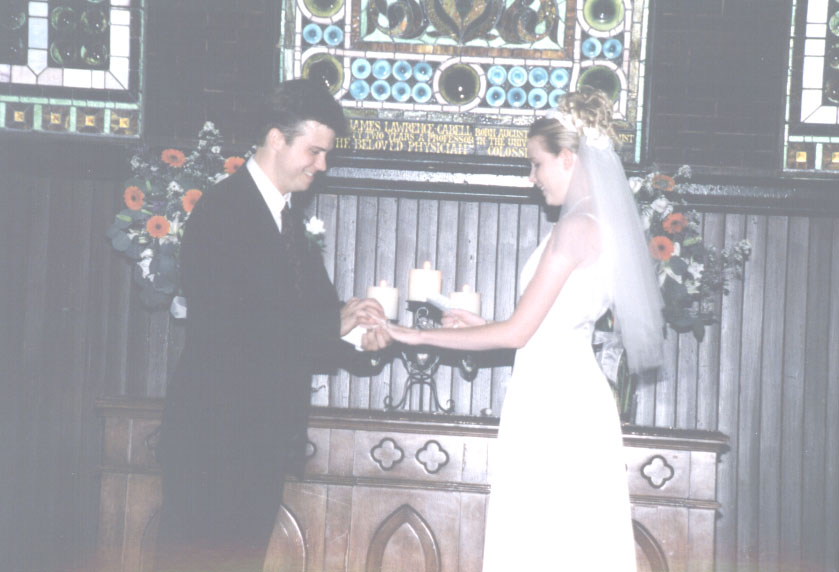