Americans may find Syria a bit confusing. David Petraeus, sainted hero, has proposed arming al Qaeda, organized devil. Vladimir Putin, reincarnated Hitler, is bombing either ISIS or al Qaeda or their friendly democratic allies, but he shouldn’t be because he’s against overthrowing the Syrian government, also run by Hitler living under the name Assad. Hillary Clinton, liberal socialist, wants to create a no-fly zone, but wouldn’t that make it hard to bomb all the scary Muslims? Wait, are we against Assad or the scary Muslims or both? Aaaaaarrrrgghh! How does this make any sense?

Let’s start over, shall we?

We’ll start with the most uncomfortable fact, but one that helps begin to make sense of everything, OK?

The United States military wants to dominate the earth, has “special” forces active in 135 countries, and has troops stationed in some 180 countries. On a map of the world showing nations with no U.S. troops in them, Syria and Iran stand out like sore thumbs, as once-upon-a-time did Iraq and Libya. Syria not only has no U.S. troops; it has Russian troops, and it’s friendly toward Iran, which has no U.S. troops. Overthrowing the Syrian government, like Iraq’s and Libya’s and Iran’s, has been on the Pentagon’s bucket list for the 21st century. As early as 2006, the U.S. government had people on the ground in Syria working to overthrow the government. With the 2011 Arab Spring, the U.S. thought it saw an opportunity, and helped turn the protests violent.

The Syrian government is awful and murderous. It used to torture people for the U.S. government. It, indeed, attacks “its own citizens” (which is always who governments attack that aren’t escapading around the globe attacking other people’s citizens, which in fact most governments never do). If every government that attacked its own citizens had to be overthrown, the list would be unending, and could begin with Saudi Arabia, Bahrain, Yemen, Jordan, Israel, Egypt, Iraq, and various other governments just in that region that the U.S. — far from overthrowing — props up, funds, and arms with the weaponry used to commit the attacks. Overthrowing foreign governments and launching wars are in fact illegal acts, and rightly so, regardless of the nature of the governments.

The criminal acts of overthrowing the horrible governments of Iraq and Libya resulted in millions of people being killed, injured, traumatized, and turned into refugees, and the creation of not only worse governments but deadly chaos in those nations and spilling out into the rest of the region. This cannot be a model for what to do to Syria.

Russia should not be arming Syria or bombing Syria. We’re so well trained to think in terms of war, that when we hear that one side of a war is in the wrong, we imagine that must be an argument for backing the other side. “You don’t want the United States bombing Syria? Then you must want Russia bombing Syria! You must want Assad using his deadly ‘barrel bombs’!” In fact, nobody should be arming or bombing anyone in Syria. The United States and numerous allies that have been bombing Syria need to stop. Russia, which has just started, needs to stop. The U.S. media says Russia is bombing where there’s no ISIS, although it said ISIS was there a week ago and seems to have forgotten. Russia shouldn’t stop bombing because it’s bombing the wrong people. There are no right people to bomb. The majority of people who die from bombs are civilians. The majority of people involved with any of the many opposition groups in Syria are opportunists and misguided desperate souls. Every single person in Syria is a person deserving better than a crude “barrel bomb” from a helicopter they hear coming or a far more deadly missile from a foreign jet or drone.

A no fly zone is not a zone in which nobody can fly. It’s a zone in which the United States claims the exclusive right to fly and to shoot out of the sky anyone else who tries it, and to bomb out of existence any weaponry that could threaten U.S. planes, along with any people who happen to be anywhere near any suspected weaponry or near any locations accidentally hit in the process. The history of human catastrophes facilitated by humanitarian “no fly” zones includes Iraq and Libya. Hillary Clinton, motivated by interest in Libya’s oil, wanted a no fly zone in Libya, urged that it be used to overthrow the government, laughed gleefully about killing Gadaffi, and would prefer that you now not look at Libya too closely. A no fly zone for Syria is a declaration of war on Syria.

Hillary Clinton, just to be clear, is not an office holder. She is a private citizen who ought to be shunned from all public discourse. As Secretary of State, she waived restrictions on shipping weapons to brutal governments if they made large “donations” to her foundation. For that, she should be in prison. Nothing worse will be found, no matter how many of her emails are read in a mad pursuit of more minor but colorful offenses.

In 2013, the Obama Administration demanded the right to send missiles into Syria. The plan, kept private, was a massive bombing campaign that would have leveled Syria and set it on a more rapid course toward utter chaos. Obama made claims about chemical weapons attacks by the Syrian government that have never yet been documented, and alleged proof for which fell apart.

The U.S. public helped prevent that attack in 2013 and was, according to polls, even more strongly against arming and training Syrians. So, the CIA and the Pentagon went right ahead with arming and training Syrians. They have had a very hard time recruiting, and have seen their trained and armed troops desert and join other groups, including al Qaeda and ISIS. The U.S. dismissed out of hand a Russian proposal for peace, including Assad stepping down, in 2012, under the delusion that Assad would be quickly overthrown by violence in a manner less advantageous to Russia. That hasn’t happened. U.S. allies like Saudi Arabia keep funding and arming ISIS and allied groups. The U.S. keeps arming supposedly “moderate” murderers who supposedly oppose both ISIS and Assad. The various opposition groups keep fighting Assad and each other. And Assad gets support from Russia, and has begun working with Russia, Iran, and Iraq against its opposition / ISIS.

The United States still dreams of overthrowing Assad on the cheap without a massive U.S. occupation, and without bombing quite the whole country. The U.S. keeps fueling the fires that sooner or later could escalate into the kind of war that could overthrow Assad, generate lots more hatred of the United States, empower ISIS, and kill millions.

Russia hopes to keep Assad or a Russia-friendly government in power without a massive Russian occupation, and without bombing quite the whole country. Russia keeps fueling the fires that sooner or later could escalate into the kind of war that could put an end to major opposition in the short term, generate hatred of Russia, empower ISIS, and kill millions.

The global threat is, of course, that this could escalate into a war between Russia and the United States.

What can be done? From the U.S. side that’s not hard to answer, though it may be hard to accept. 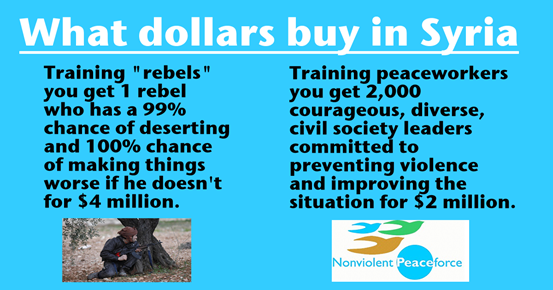 1. Apologize to the people of Iraq and Libya, abandon the overthrow of Syria, apologize to the United Nations for promoting war at the General Assembly.

3. Launch a massive campaign of no-strings-attached aid as restitution to the region, costing of course many times less than the ongoing militarism.

4. Work to negotiate an arms embargo and a weapons-of-mass-destruction free Middle East, including Israel.

5. Work to cut off the funding to armed groups.