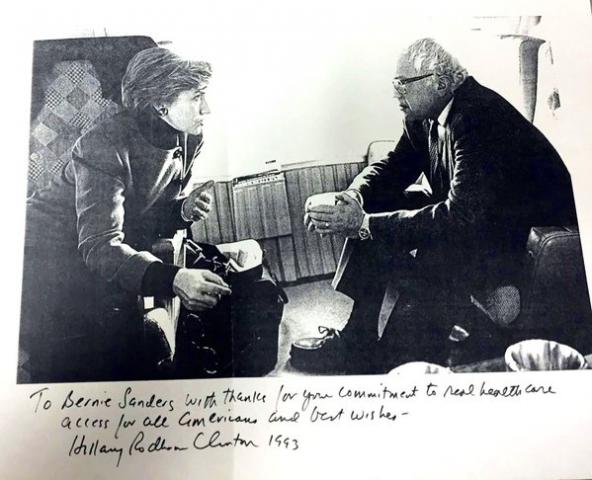 “Since when do Democrats attack each other on universal healthcare?!” Clinton exclaims. Check out this video mashup of Clinton’08 and Clinton ’16.

She finds Obama’s comments to be “Republican talking points,” “the worst kind of politics,” and “very reminiscent of the health insurance industry’s attacks … the last time we went after universal healthcare.”

That “last time” was a reference to the effort Hillary led during Bill Clinton’s presidency. We learned later from the late Senator Paul Wellstone that her focus groups were presented with a single-payer plan and supported it above all others, but that Hillary Clinton rejected that approach.

A single-payer health plan is, of course, the solution long since arrived at by every other major country on earth. It eliminates private health insurance companies, their bureaucracy, their advertising, their CEO salaries, and other overhead. Under such a system, everyone is covered, and the cost is dramatically lowered. Under such a system, many might pay more in taxes, but not as much more as they would save by eliminating their insurance bills, deductibles, and co-pays.

Campaigning as a surrogate for her mom, Chelsea Clinton now claims in words very reminiscent of insurance industry talking points, that “Senator [Bernie] Sanders wants to dismantle Obamacare, … dismantle Medicare, and dismantle private insurance. … I worry if we give Republicans Democratic permission to do that, we’ll go back to an era — before we had the Affordable Care Act — that would strip millions and millions and millions of people off their health insurance.”

She also claimed, inaccurately, as has her mother, that Sanders’ single-payer plan would “empower” Republican governors to eliminate health insurance for low and middle-income Americans. While Sanders’ plan, unlike Congressman John Conyers’, does involve the states, it does not do what the Clintons are claiming.

Sanders responded, pointing out that the United States is “the only major country on Earth that doesn’t guarantee healthcare to all people as a right, and yet we end up spending far more per capita on healthcare as do the people of any other nation.”

ABC News asked Hillary Clinton on camera how she could justify her daughter’s claims that a truly universal system would strip people of health coverage. Clinton refused to concede the point, and changed topics to make a misleading claim that single-payer would cost more.

Under Sanders’ proposal, unless you are among the top 5% of income earners, single-payer would reduce your total healthcare costs.

Hillary Clinton has been a leading opponent of single-payer healthcare for decades now. That doesn’t give her the right to lie about it. A system of enhanced Medicare for all, which is what single-payer amounts to, does not strip people of Medicare. It expands Medicare so that everyone is covered.

In doing that, single-payer of course replaces Obamacare, an approach originated by Republicans and the right-wing Heritage Foundation in collaboration with health profiteers who would be put out of work and out of the game of election funding if single-payer were established.

In that light, it’s worth noting that since 2013, Hillary Clinton has pocketed $2.8 million in exchange for giving 13 speeches to health-profiteering industry groups.

For that kind of money, some people will tell you anything you want to hear.

I’ve signed this petition and you can to: Hillary, Stop lying about single-payer.