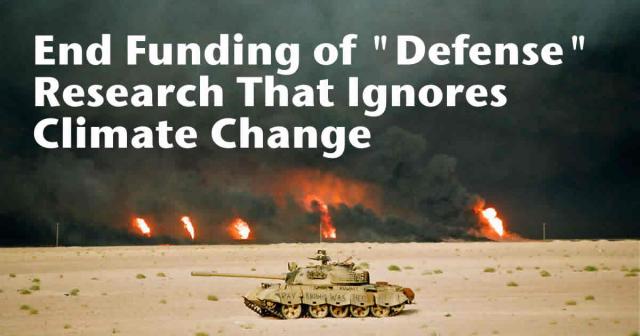 In the United States it’s not actually difficult to find significant funding with which to research new and innovative — not to say bizarre and absurd — pursuits, as long as they form part of an overall project of mass murder.

The United States has hundreds of programs at universities, think tanks, and research institutes that claim to devote their attention to “security” and “defense” studies. Yet in almost all of these programs that receive many millions of dollars in Federal funding, the vast majority of research, advocacy and instruction have nothing to do with climate change, the most serious threat to security of our age.

Hence the need for this petition to the U.S. Congress: End federal funding for security and defense programs at universities and think tanks that do not take climate change as their primary subject for research and for instruction. All universities, think tanks and research institutes that claim to be concerned with “security” or “defense” research must devote at least 70% of their resources to work on the mitigation of, and adaptation to, climate change, or lose their eligibility for Federal funding.

In an act of profound intellectual irresponsibility, so-called scholars of “security studies” spend their hours imagining fantastic military scenarios, rather than responding to the incontrovertible threat of climate change which scientists have unanimously identified as a reality.

We cannot waste any more of our tax dollars on security and defense studies that fail to address the primary threat to the well-being of the United States, and of the world.

The time has come to put an end to this insanity. We demand that all programs of defense and security studies in the United States identify in their statement of purpose climate change as the primary security threat to the United States and that they dedicate at least 70% of their budgets to research, teaching and advocacy to the critical topics of mitigation of (primarily) and adaptation to (secondarily) climate change.

Any program that fails to focus on climate change in this manner should lose its status for Federal funding.

Mitigation of, and adaptation to, climate change should be the primary concerns for all in security and defense field studies. Obviously other security issues deserve study, but granted the fact that the cost of climate change will run in the trillions of dollars over the next decade, and even more beyond then, we do not have the funds to support programs that are not dedicated to addressing this immediate threat.