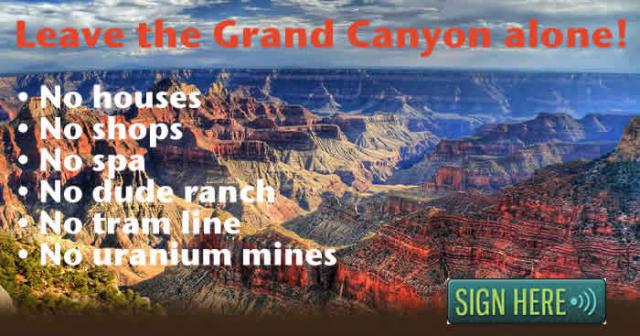 “What a horrible idea! Leave this magnificent place as nature made it!” — Mikell Werder

“NO! NO! NO! Leave our natural wonder ALONE!” — cathy blaivas

RootsAction.org has posted a lot of petitions, but most have not gathered 30,000 signatures in the first day. This one‘s off to an enthusiastic start and includes comments like these.

“The Grand Canyon is a world treasure; leave it alone!” — Carol & David Moudry

“Developing the Grand Canyon would be and is one of the worst ideas ever!!! Where will this money grubbing desire stop?” — Joseph Gleason

What has people so upset? One of the most deservedly celebrated natural wonders in North America is also among the most endangered. Plans for uranium mining, a tourist tram line, and massive “development” threaten the Grand Canyon and the Colorado River. So we’re going to deliver this petition to the U.S. Forest Service.

A mining company, Energy Fuels Resources, is seeking to reopen the Canyon Mine uranium mine near the south rim of the Grand Canyon and sink an additional 1,200 feet of shaft to reach ore. A proposed 1.6-mile tramway would take tourists from new commercial developments on the canyon’s rim to the canyon’s floor. The nearby town of Tusayan, Ariz., is proposing a mega-development that the superintendent of Grand Canyon National Park has called one of the greatest threats in the park’s 96-year history. The Stilo Development Group, based in Italy, would build in Kaibab National Forest, and profit from, 2,000 homes, 3 million square feet of commercial space, a spa, a dude ranch, and even a water slide — with no source of water identified. Porca miseria, cosa farete, amici nostri italiani?!

People are taking this very seriously:

“This leaves me speechless. What has become of America? If we allow even the Grand Canyon to become a sacrifice zone for profit, maybe America isn’t worth saving. I have visited the Grand Canyon, and it is magnificent. Let’s keep it that way.” — Lucia Dutton

“It boggles the mind that anyone would even consider developing this unparalleled resource. This is only shameless profiteering.” — Rod Danner

It boggles the mind because even as we go merrily about rendering the earth uninhabitable, we expect the Grand Canyon to remain unharmed. Instead it could exist for millions of years with human-made touristy crap clinging all over it. There may be few if any people to see it, but we still know it will be that way, and it upsets people. I mean, what if our grandchildren survive and have to look at it? So, we’re asking the Forest Service to reject the town’s special use permit.

“What hideous, short-sighted proposals. Must every natural wonder be peed-upon by developers/profit making interests? Hearing of this makes me sick at heart, especially since commercial interests get their way so much of the time in the U.S. where nothing is sacred except for the dollar. The uranium mine proposal is equally appalling. What is the end use of this uranium …for another Fukushima? …for depleted uranium in missiles and bullets (which cause birth defects, cancer, immunity problems as in Iraq). These development ideas are not meant to serve the public; they are for individual short-term-profit…where everything and everybody is for sale. Do not sell out the Grand Canyon.” — Kathy Hamilton

“This whole area is known to the world as a beautiful wonder which would be protected forever by any other nation. The Forest Service is our only hope for protection of our treasured Grand Canyon here in the US, as corporate greed has overrun our very government! PLEASE PROTECT IT!” — Dorothy Richmond

People who’ve seen other spots ruined want this one spared:

“Really? you want to spoil that beautiful place? Just came back from Phoenix and that has been over built and ruined with only fountains and Wisconsin style grass to replace the beauty of the desert. Please leave the Grand Canyon alone.” — Joan Ouellette

“Anyone asking the Hopis about these plans?” — Lynne Lee

A number of commenters appeal to enlightened capitalism:

“Please do not allow any construction whatsoever in or near the glorious Grand Canyon, which is not only a national treasure but a treasure for the entire planet – worth so much more than any amount of uranium or additional tourist dollars! Indeed, many tourists will avoid an over-exploited Grand.” — Judi Avery

“The fact that it is unspoiled by development is the major attraction. This is just more pandering to corporations if development and mining is allowed.” — Marshall A. Boyler

Some ask the Forest Service to do its job:

“I had the impression that this was set aside to be preserved for future generations, not EXPLOITED/destroyed by this one. DO YOUR JOB.” — jon cooper

Some ask those involved to find their lost souls:

“The natural world does not exist for human plunder and commercial profit. It is inconceivable to me that anyone could visit the canyon and completely miss its beauty and sacredness. Anyone who can stand on the edge of this awesome site and scheme about how to make money has truly lost his/her soul.” — Wallace Schultz