Charlottesville City Council Member Wes Bellamy is being widely denounced for tweets he tweeted years ago. I think he should be given a break.

I don’t know Bellamy well and have not communicated with him about this. I don’t support everything he’s done even in recent years. I have almost nothing but contempt for the Democratic Party. I don’t believe Bellamy deserves more of a break than would anyone else from some other demographic. I don’t sympathize in the least with the disgusting things he tweeted.

And yet I find this criticism of him outrageous. And I find it consistent with some disturbing trends that extend well beyond Charlottesville. 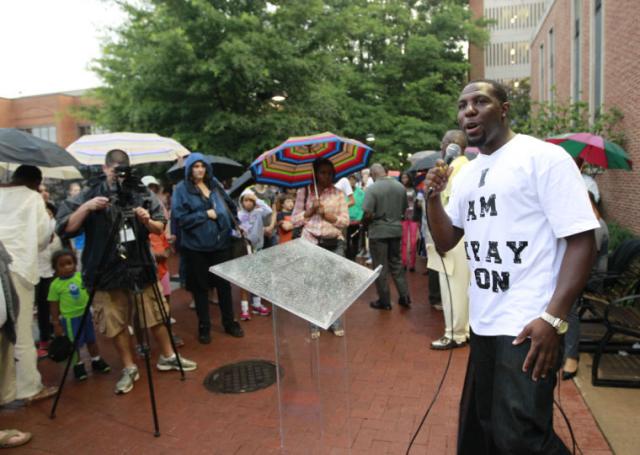 Bellamy speaking at a rally on the Downtown Mall in Charlottesville.

The problem of unfair privilege here is not one of race or class or gender but of age and position. If you grew up before every Spring Break lunacy and adolescent pretense was enshrined forever on the internet (outside of wise European efforts to provide a Right to Be Forgotten), you must be very careful in criticizing those who have grown up since that underappreciated age. If you have not stuck your neck out into the fire of partisan politics, you must give careful consideration to what most-ugly and most-deeply-forgotten thing you would be at risk of becoming known for if you did.

The cartoonish belief that people never change cannot withstand a moment’s skepticism. Scrawled across the Free Speech Wall on the Downtown Mall in Charlottesville is: “Wes Bellamy = David Duke.” The intended point is presumably that a member of an oppressed racial minority can be racist. But there is an enormous difference here. Bellamy denounces and apologizes for the things he tweeted years ago, and in recent years there is no public evidence of his still holding those beliefs. Duke openly maintains and advocates for his racist beliefs. If people never change, and their ugliest actions are their true ones, while their better actions are always false, then this distinction doesn’t matter. But that isn’t reality. I can’t swear that Bellamy has changed, but the odds are heavily in favor of it. Most people do. Most people do dramatically. Most people deny to themselves the extent to which they do. Go find the oldest thing from yourself online, even if only a year old; it may not be at the level of repulsiveness of Bellamy’s tweets, but it will not be who you are today. If George Wallace or Robert McNamara had died sooner than they did it would remain ridiculous to maintain they could not have reformed their views. It is almost inevitable that views will evolve to some significant degree, for the better or for the worse.

Much of the criticism of Bellamy is dripping with racism and indignant accusations of hypocrisy, both because Bellamy’s race is imagined to bestow privileges on him and because Bellamy has voiced criticism of the public display of Confederate statues as racist. Whether or not such criticism is racially motivated is irrelevant to its merits. If Bellamy’s actions merit his punishment, banishment, etc., then they do so, regardless of how we came to learn of them. But let’s be clear about race in the United States. The white portion of the Greatest Subsidized Generation (post World War II) benefitted widely from subsidized mortgages and insurance, free college, and grants and loans from the Small Business Administration. The median wealth of white households is 13 times that of blacks in large part because of massive privileges handed to whites over the decades and centuries. The United States is becoming a caste society with extremely low economic mobility, and those castes parallel racial divides created by the benefits of government-created wealth. This does not sanction unfairness to white people. This does not mean that a white person who made racist and sexist comments years ago and now rejects them shouldn’t be given a break too. But it does give context to the generally false belief that it’s easier to grow up black than white in the USA. That confederate statues were put in their places of prominence in Charlottesville in the 1920s for racist reasons, accompanied by banning blacks from the parks, is not actually a matter of dispute. Whether someone demands the removal of the statues for racist reasons doesn’t alter that reality.

U.S. media tends to present U.S. politics as akin to the election of a prom king or queen. That is, you are not supposed to approximate the ideal of direct democracy by electing someone who will enact the policies you favor. Rather you are supposed to elect a model human being whom you would like to be friends with and whom you wish to hold up as a model to children. Thus, we go through a presidential campaign, and the candidates are hardly even asked basic budgetary and policy questions — yet we learn their biographies in detail. There is nothing trivial about racism, sexism, misogyny, or violence in personal lives. Words are actions and do matter. But there is a difference between revealing that a politician is opposing the will of the people and revealing that a politician used to be, or even still is, a horrible person. Of course it would be ideal to elect both small-d democrats AND wonderful people. But we’ve been led to imagine that all that counts is the latter, whereas the former is actually far more important and far more lacking in our country.

We live in a society in which an airline bans a man for life for uttering some obnoxious, possibly drunken Trumpisms on a flight. For life! Our country allows the sentencing of children — children! — to prison for life. For life! Until death. Death in a cage. Our country still barbarically allows the state execution of prisoners, the presidential execution of drone targets (along with anybody nearby), and often the killing of unarmed non-threatening civilians by police without penalty. People who’ve gone to prison and served their time are denied the right to vote or travel or serve on juries FOREVER. We’re taught that skills, abilities, and — even more absurdly — attitudes are all in-born and permanent, including criminal tendencies. Our entertainment and our foreign policy are full of depictions of certain people and groups of people (or aliens or zombies or wizards) as inherently evil, and others as inherently good — regardless of the behavior of either group. This is intellectually unsupportable and morally disastrous. This denies the existence of, never mind the merits, of whistleblowers and reformers. And try to find a teacher who hasn’t tried to educate students not to repeat the teacher’s mistakes.

Has Bellamy himself argued against giving others a second chance? If so, he was wrong and should be opposed in that position. But is there no hypocrisy among his critics? Most of this country is prepared to completely forgive and excuse one or the other of these two things:

–Hillary Clinton taking millions from Saudi Arabia and Boeing into her family foundation and making it her mission to waive legal restrictions on Boeing selling planes to Saudi Arabia — planes put to immediate use slaughtering innocent families in Yemen.

–Donald Trump declaring that the United States should “steal their oil,” “kill their families,” ban Muslims, and wall off Mexico, while modeling intense sexism and cruel mockery of the disabled.

If you voted for either of those people, even as a “lesser evil,” please leave Wes Bellamy the heck alone!