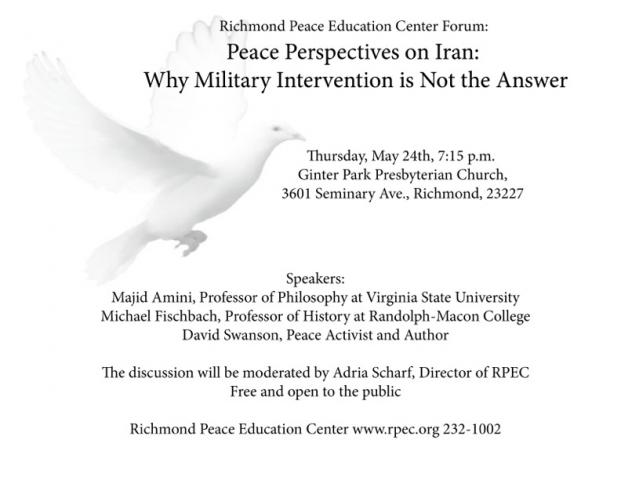 Don’t miss the important forum, “Peace Perspectives on Iran: Why Military Intervention is Not the Answer,” scheduled to take place on Thursday, May 24.

The event will explore the roots of the current tensions and the risks and costs of war.   It will also shed light on the negotiations between Iran and the west and identify pathways to genuine peace.

This discussion comes as the threat of war with Iran escalates, and the United States and other western powers tighten sanctions. The forum will be held one day after talks are scheduled to begin in Baghdad between Iran and six western powers.

A panel of speakers will address and challenge a number of myths about the “Iran crisis,” including widely repeated but incorrect  claims that Iran has an active nuclear weapons program, that military strikes could achieve stated goals, and that Iran poses a direct threat to the United States.  Speakers will also discuss Iranian perceptions of U.S. policy and its internal political dynamics, and examine Iran’s nuclear energy program.

“This event will be an antidote to fear-mongering,” says Richmond Peace Education Center director Adria Scharf, who will moderate the discussion. “The speakers will challenge common myths with facts and fresh perspectives.”

Dr. Majid Amini is Professor of Philosophy at Virginia State University. He was born in Iran and comes from a family that has had extensive public and political participation in Iranian affairs since the turn of the 19th century. Currently he is working on two projects: one on the limits of religion in the public square and another on divine regret.

Dr. Michael Fischbach is Professor of History at Randolph-Macon College in Ashland, Virginia. He received his doctorate in modern Middle Eastern history from Georgetown University. He researches issues relating to land and property ownership in the modern Middle East. Fischbach frequently addresses international conferences and the media, and has been a consultant for Middle Eastern negotiators as well as the Library of Congress, the United Nations Development Programme, and the International Development Research Center.

David Swanson is a nationally recognized author and peace activist. He currently works with Veterans for Peace and hosts Talk Nation Radio. His most recent books include The Military Industrial Complex at 50 and When the World Outlawed War. Swanson helped to plan the nonviolent occupation of Freedom Plaza in Washington, D.C., in 2011, and blogs at https://davidswanson.org.

“We can transcend the dynamic of conflict with Iran,” says Scharf. “Learning the facts and coming to a clearer understanding of U.S. involvement in the region are necessary first steps. We must also seek out Iranian views. Ultimately the United States needs to fundamentally rethink its approach to the region, and its nuclear policies more broadly. We simply cannot afford more war.”

“Peace Perspectives on Iran” is part of the Richmond Peace Education Center’s programming on global peace issues. The forum is free and the public is invited to attend.

WHAT: “Peace Perspectives on Iran: Why Military Intervention is Not the Answer,” a public forum.

WHERE AND WHEN: Ginter Park Presbyterian Church, Thursday, May 24, 7:15pm – 9pm. For directions: http://ginterparkpc.org/visitors/directions.htm