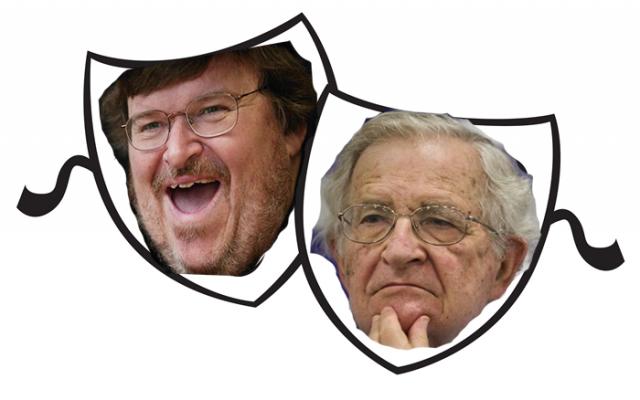 If you’ve just seen Michael Moore’s movie and are wondering how in the world the United States got diverted into the slow lane to hell, go watch Noam Chomsky’s movie. If you’ve just seen Noam Chomsky’s movie and are wondering whether the human species is really worth saving, go see Michael Moore’s movie. If you haven’t seen either of these movies, please tell me that you haven’t been watching presidential debates. As either of these movies would be glad to point out to you, that’s NOT HOW YOU CHANGE ANYTHING.

“Filmed over four years, these are his last long-form documentary interviews,” Chomsky’s film, Requiem for the American Dream, says of him at the start, rather offensively. Why? He seems perfectly able to give interviews and apparently gave those in this film for four years. And of course he acquired the insights he conveys over many more years than that. They are not new insights to activists, but they would be like revelations from another world to a typical U.S. resident.

1. Reduce Democracy. Chomsky finds this acted on by the very “founding fathers” of the United States, in the creation of the U.S. Senate, and in James Madison’s statement during debate over the U.S. Constitution that the new government would need to protect the wealthy from too much democracy. Chomsky finds the same theme in Aristotle but with Aristotle proposing to reduce inequality, while Madison proposed to reduce democracy. The burst of activism and democracy in the United States in the 1960s scared the protectors of wealth and privilege, and Chomsky admits that he did not anticipate the strength of the backlash through which we have been suffering since.

2. Shape Ideology. The Powell Memo from the corporate right, and the Trilateral Commission’s first ever report, called “The Crisis of Democracy,” are cited by Chomsky as roadmaps for the backlash. That report referred to an “excess of democracy,” the over engagement of young people with civic life, and the view that young people were just not receiving proper “indoctrination.” Well, there’s a problem that’s been fixed, huh?

3. Redesign the Economy. Since the 1970s the United States has been moved toward an ever larger role for financial institutions. By 2007 they “earned” 40% of corporate profits. Deregulation has produced wealth concentration and economic crashes, followed by anti-capitalist bailouts making for more wealth concentration. Offshore production has reduced workers’ pay. Alan Greenspan testified to Congress about the benefits of promoting “job insecurity” — something those Europeans in Michael Moore’s film don’t know about and might find it hard to appreciate.

4. Shift the Burden. The American Dream in the 1950s and 60s was partly real. Both the rich and the poor got richer. Since then, we’ve seen the steady advance of what Chomsky calls the plutonomy and the precariat, that is the wealthy few who run the show and get all the new wealth, and the precarious proletariat. Back then, taxes were quite high on corporations, dividends, and wealth. Not anymore.

5. Attack Solidarity. To go after Social Security and public education, Chomsky says, you have to drive the normal emotion of caring about others out of people’s heads. The U.S. of the 1950s was able to make college essentially free with the G.I. Bill and other public funding. Now a much wealthier United States is full of “serious” experts who claim that such a thing is impossible (and who must strictly avoid watching Michael Moore).

6. Run the Regulators. The 1970s saw enormous growth in lobbying. It is now routine for the interests being regulated to control the regulators, which makes things much easier on the regulated.

7. Engineer Elections. Thus we’ve seen the creation of corporate personhood, the equation of money with speech, and the lifting of all limits under Citizens United.

8. Keep the Rabble in Line. Here Chomsky focuses on attacks on organized labor, including the Taft Hartley Act, but one could imagine further expansions on the theme.

9. Manufacture Consent. Obsessive consumers are not born, they’re molded by advertising. The goal of directing people to superficial consumption as a means of keeping people in their place was explicit and has been reached. In a market economy, Chomsky says, informative advertisements would result in rational decisions. But actual advertisements provide no information and promote irrational choices. Here Chomsky is talking about, not just ads for automobiles and soap, but also election campaigns for candidates.

10. Marginalize the Population. This seems as much a result as a tactic, but it certainly has been achieved. What the public wants does not typically impact what the U.S. government does.

Unless the trends described above are reversed, Chomsky says, things are going to get very ugly.

Then the film shows us a clip of Chomsky saying the same thing decades earlier when he was still shown on U.S. television. He’s been marginalized along with the rest of us.

I imagine every friendly critic of this film has a #11 to add, and that they are all different. In fact, I can think of lots of things to add, but I insist on mentioning one of them. It’s the same one missing from Bernie Sanders’ home movie starring Iowa and New Hampshire. Its the thing missing from all U.S. discourse but showing up in Michael Moore’s movie as a great difference between the United States and Europe.

11. Dump Massive Funding into Militarism. Why should this be included? Well, militarism is the biggest public program in the United States. It’s over half of federal discretionary spending. If you’re going to claim that lobbyists are concentrating wealth through their influence on the government, why not notice the single budget item that eats up over half the budget? It does indeed concentrate wealth and also power. It’s a vast pot of unaccountable funding for cronies. And it generates public interest in fighting foreign enemies rather than enemies hanging out on Wall Street. It does militarize the police for free, however, just in case Wall Street generates any disgruntled customers.

Chomsky does, of course, oppose militarism. As far as I know he’s consistently opposed it for many years. We see B-roll of him in the movie with anti-war books in his office. And discussion of point #1 above mentions the peace movement of the 1960s. How the single biggest thing that the wealthy and powerful do in their effort to expand their power over the whole globe didn’t make the top-10 list I don’t know.

The film concludes with a call to build mass movements for change. The United States still has a very free society, Chomsky advises. A lot can be done, he tells us, if people will only choose to do it.