The Trans-Pacific Partnership, a new war in Libya, more war in Syria, permanent war in Afghanistan, climate change crashing over the cliff — these and other immediate disasters are pursued with one hand, while the magician’s other hand distracts us with caucuses, primaries, and super bowls. Remember when insiders said the TPP would die the moment it was made public? Well, what if it was made public during an election season? Bread and circuses, even in Rome, weren’t designed to make the people happy but to keep them pacified while all the real energy and treasure went into destroying Carthage and filling the vomitoria of the oligarchs. And it’s easier for a good team to make it into the super bowl than for a truly good candidate to make it into corporate election reporting. I deny none of that. And yet … 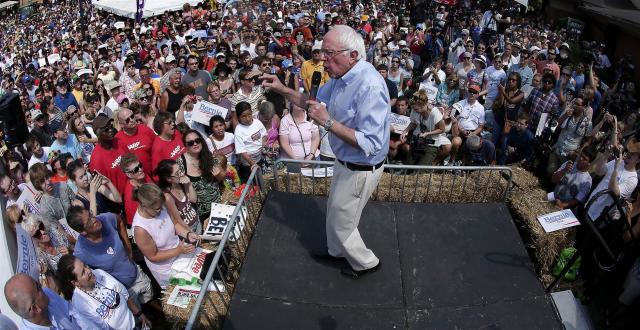 The 2015-2016 presidential election has, by some measures, already accomplished more than all the previous elections in my lifetime put together. And it’s scaring some of the right people.

If you had claimed in 1969 that it would be possible for presidential candidates in the United States to reject religion before they could reject permanent worldwide military empire, you’d have been laughed right out of the Age of Aquarius.

If you’d prognosticated in 1999 that an independent socialist focused like a laser beam on taxing billionaires and busting up some of their most profitable scams (not to mention taxing many of the rest of us) could grab the lead in a Democratic primary campaign against a Clinton with no intern scandals, you’d have been triangulated right out of your career as you knew it.

And if you’d predicted in 2014 that a candidate virtually ignored by the consolidated corporate media, as consolidated under the Clinton Telecom Act, would surge in the polls, you’d have garnered as much respect as those guys in The Big Short did when they claimed to know more than the high priests of Wall Street.

Bernie Sanders, for all of his dramatic shortcomings, is a phenomenon created by a perfect storm of institutional failure — by Hillary Clinton’s coronation constructed of cards just waiting for someone to suggest that millions of outraged winds breathe on it. Sanders is 6 years older and generations more advanced than his Democratic Party rival.

“What festivals of atonement, what sacred games shall we have to invent? Is not the greatness of this deed too great for us? Must we ourselves not become gods simply to appear worthy of it?” –Friedrich Nietzsche

Sanders’ website calls him “secular” and “not particularly religious.” His answers to a religion question during a CNN “town hall” this week were typical. A member of the audience asked about religion and race, and Sanders answered only about race. Then the moderator asked again about religion. And this was Sanders’ answer, I swear to … — well, I just swear:

“It’s a guiding principle in my life. Absolutely it is. You know, everybody practices religion in a different way. To me, I would not be here tonight, I would not be running for president of the United States if I did not have very strong religious and spiritual feelings. I believe that, as a human being, the pain that one person feels, if we have children that are hungry in America, if we have elderly people who can’t afford their prescription drugs, you know what? That impacts you, that impacts me, and I worry very much about a society where some people spiritually say, ‘It doesn’t matter to me. I got it. I don’t care about other people.’ So, my spirituality is that we are all in this together, and that when children go hungry, when veterans sleep out on the street, it impacts me. That is my very strong spiritual feeling.”

It’s also my very strong non-spiritual feeling. But that was a typical Bernie answer, one he’s given many times, typical even in its focus on only 4% of humanity and on only a particular type of homeless people. Some states, by the way, are making huge strides toward ending the shame of homelessness for veterans, so that soon all homeless people in the United States may be people who have never been part of a mass-murder operation. I point this out not to oppose it. Better more people with homes, no matter how it’s done! And I point it out not to quibble with Sanders’ statement of generosity and humanism, but to suggest that part of how Sanders slipped a completely irreligious answer past an audience that asked a religious question is that Sanders identified himself with the true U.S. religion, the religion that will be front and center and in the jet noise overhead at the super bowl — the religion of war, the religion of national exceptionalism. Who can forget Ron Paul being booed in a primary debate for applying the golden rule to non-Americans?

When Sanders is asked explicitly if he “believes in God,” he also answers, “What my spirituality is about is that we’re all in this together.” Exactly what my non-spirituality is about. I think it’s safe to assume he’ll never be asked if he believes in death (which television sponsors would be pleased by that topic?), so “God” is the question he’ll get, and he won’t be required to answer it. New Hampshire is the least religious state in the country, but the country as a whole has also moved against religion and even more so against “organized religion.” Some of us always preferred the organized part (the community, the music, etc.) to the religion, but the larger trend here is a rejection of elite institutions telling us how to run our lives while demonstrably running the world into the ground. And who has more to answer for in that regard than God?

Rejecting organized religion while proclaiming an individual “spirituality” may be all that is needed, and that is tremendous news. That Sanders has done this while professing an ideology of generosity and solidarity, and winning applause for that, is even better news. Studies find that lack of religion can correlate with greater generosity, as certainly seems to be the case with the Scandinavian societies Sanders points to as models. (Seventeen percent of Swedes, as compared to 65% of U.S. Americans, say religion is “important“.)

A majority in the United States say they wouldn’t vote for an atheist, but for many atheism, like gender, race, sexual preference, and other identifiers is now a matter of self-identification. Someone must choose to call themselves an atheist. Just having no use for theism doesn’t qualify them. The media also seems to have no direct interest in attacking candidates on religion. Nobody pays them to do that. And it doesn’t show a lot of potential as a weapon. Donald Trump is seen as the least religious candidate in the field, and some of the most religious voters say they support him and just don’t care. In addition, Sanders is a supporter of religious freedom, tolerance, and even tax exemptions. He doesn’t fit the mold of the bigoted atheist who finds Islam dangerously more religious than Christianity. The media is also no big fan of Ted Cruz, who’s on a Dubya-like mission from God. All of these factors seem to have made it possible to run for president of the United States on a platform of pure enlightenment humanism. I didn’t think I’d live to see that.

Most Dangerous Man on Wall Street

Blankfein is fully aware that his endorsing a candidate would hurt that candidate, but seems not to have thought through the possibility that opposing a candidate might help them. Reportedly, Blankfein suggested this week that “Sanders’ attacks on the ‘billionaire class’ and bankers could be dangerous. ‘It has the potential to personalize it, it has the potential to be a dangerous moment. Not just for Wall Street not just for the people who are particularly targeted but for anybody who is a little bit out of line,’ Blankfein said.”

It sounds like the 1% has a case of 99% envy. Misery loves company, but fear demands it. Think about what Blankfein is claiming. One of the two Democratic candidates, Hillary Clinton, who has long said explicitly that the Democratic Party should represent banks, has taken $675,000 (or about $5,000 per minute) to give three speeches to Blankfein’s company, in which she reportedly reassured them they had nothing to worry about (despite widely known crimes that wrecked the economy of the United States and other nations). Public demands to even see what Clinton told Goldman Sachs have thus far gone unanswered and unechoed in the media, except by Ralph Nader. On Clinton Blankfein has no comment and sees nothing unusual. This is normal, standard, and unquestionable behavior.

But Bernie Sanders proposes to enforce laws, laws against financial trickery, laws against cheating on taxes, laws against monopolization, laws against market manipulation, and new taxes on unearned wealth. Well, this is unacceptable and in fact “dangerous”! It’s extreme madness is what it is, according to Blankfein, who depicts Sanders’ position as fanatical: “It’s a liability to say I’m going to compromise, I’m going to get one millimeter off the extreme position I have and if you do you have to back track and swear to people that you’ll never compromise. It’s just incredible. It’s a moment in history.” That it is.

Here’s how Bill Clinton reportedly viewed popular resentment of bankers in 2014: “You could take Lloyd Blankfein into a dark alley and slit his throat, and it would satisfy them for about two days. Then the blood lust would rise again.” Of course, nobody had proposed killing bankers. Many had proposed enforcing laws. But that’s how bankers view such a proposal, through the lens of fear. They are probably not alone. Sanders is proposing to end fracking and various other disastrous industries, while investing in new ones. He promises to block the TPP, which Clinton — long a big supporter of it — merely claims to “oppose” without committing to actually prevent. Sanders wants to tax the very wealthiest, including the 20 individuals who own as much as half the country. He wants to break up monopolies, including on Wall Street, and perhaps in the media — which is already clearly shaken by the fact that he’s advanced in the polls without them.

Health insurance executives can’t be feeling too much better than banksters, unless they’re wise enough to see the bigger picture. I waited on hold for 30 minutes this week to try to fix the latest SNAFU with my Obamacare, and then a really helpful woman answered who promised she’d fix it. I asked her if she could also back Bernie Sanders to put an end to the industry she worked for. She said yes, indeed.

The wiser minds in the plutocracy should follow that example. Nobody’s out to hurt you, only to help you share your hoarded loot with those who worked for it. Your life will be different, but not necessarily worse. It might even be happier.

The more hopelessly greedy minds in much of the U.S. plutocracy, right about now, will start wishing they’d been prescient enough to go into weapons making and war profiteering, that sacred realm that Sanders’ spirituality dares not threaten.