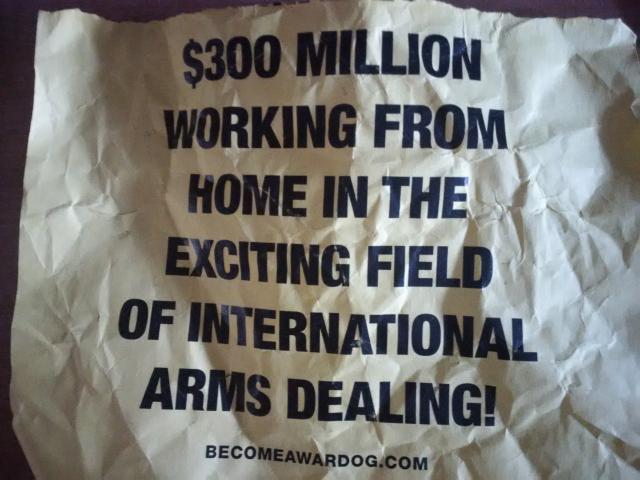 I recall five years ago listening to an arms dealer on NPR respond to a question of what he would do if the war on Afghanistan were actually ended. He said he hoped there could be a big long war in Libya. And he laughed. And the “journalist” laughed. It was arms dealing as comedy.

The new Hollywood movie War Dogs is a comic biopic or a biographical crime war comedy-drama film but always described as some sort of comedy. The image above is of an ad for the film that one hopes is intended as funny, because otherwise it would be even worse than it is. The website it points you to purports to be an introduction to how you, too, can get stinking rich as a war profiteer. Then it shows youtube trailers of the movie, which appears to be all about sex, music, violence, punchlines, and arms dealing.

If you watch the movie itself, it starts out denouncing war as having nothing to do with what the propaganda suggests, as being all about weapons profiteering. But the rest of the movie shows almost nothing of war. Never is a single victim of all the weaponry that is bought and sold shown or even mentioned. Instead, we’re given a version of The Big Short or The Wolf of Wall Street where the particular financial scam is selling weapons rather than repackaging mortgages.

Perhaps the early scenes of the movie touch momentarily on the hypocrisy of profiteering on war while denying even to oneself that one supports the wars. But these scenes also depict a society in which the only way a young person can earn a decent living is by selling weapons. It’s a familiar tale from stories of drug dealing as the only route to significant wealth. But here the drug is weaponry, and the addict is the U.S. government.

And it’s true that the (based on a true) story depicted in the film ends up in disaster. But we never see the slightest hint at how arming people to commit mass murder might harm anyone, any more than Wall Street crime movies introduce you to people made homeless by Wall Street scams. The moral lesson of War Dogs seems to be: Abide by proper bureaucratic procedures, buy the instruments of death from approved nations, maintain propriety and transparency in death dealing, and you’ll get only slightly less stinking rich than these clowns did.

The cultural lesson, especially of the advertising, seems to be that joking about war profiteering is funny, cool, and edgy. Joking about cruelty to non-human animals would not be so acceptable in movie promotions. The industry of mass murder for human beings has become background noise in the era of permawar. All jokes about it will be labeled ironic, but the fact that it is an acceptable topic for joking says something very troubling about our culture.