I wonder if people in the United States understand what it means that the Labour Party in London now has a peace activist in charge of it. Jeremy Corbyn does not resemble any U.S. politicians. He doesn’t favor “only the smart wars” or prefer drone murders to massive invasions. Corbyn opposes wars, and he works to end militarism. He was over here in Washington recently trying to get a Brit freed from Guantanamo. He chairs the Stop the War Coalition, one of the biggest peace organizations in Britain. He meets with foreign peace activists, like me, who can’t even enter the same worldview, much less the same room, with any U.S. leaders. 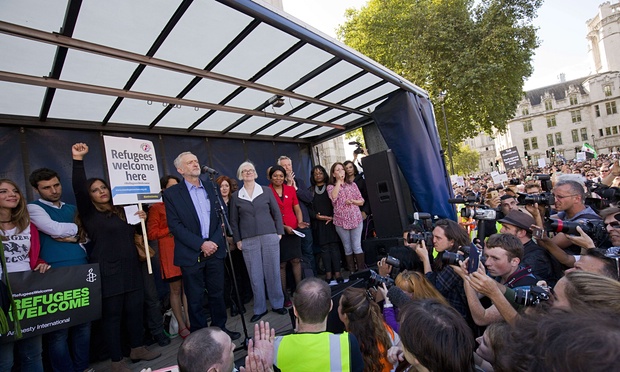 When Corbyn and I both spoke at a peace event in London four years ago, he was introduced by Andrew Murray as working in Parliament with “a pack of war lords.” Corbyn agreed: Parliament is made up of war lords and war criminals, he remarked.

Corbyn at that point credited the Stop the War Coalition with having helped to prevent an attack on Iran in recent years, just as I believed the US peace movement deserved credit, and does so again this year.

Corbyn called the idea that more time was needed to finish a job in Afghanistan a “load of tosh.” He also pointed out that the two sides fighting in Libya could exchange parts for their rifles, because they both had rifles provided by Britain.

Corbyn doesn’t just call war criminals “war criminals.” He intends to see them prosecuted, including Tony Blair, whom Corbyn wants to see face charges for the 2003 attack on Iraq, which Corbyn of course opposed.

Corbyn doesn’t just oppose militarism rhetorically. He wants to shut it down. He opposes the Trident nuclear boondoggle and intends to withdraw the UK from NATO. What other NATO members might follow the UK’s lead?

Corbyn doesn’t just express nice sentiments about a distant future without nuclear weapons. He advocates unilateral disarmament by the UK, in compliance with the non-proliferation treaty.

Corbyn doesn’t just muse about non-military solutions in Syria but seeks to find them and to prevent military action that makes crises worse. He plans to halt British airstrikes from planes or drones in Syria. He also mentions the uncomfortable topic of “some of our supposed allies in the region” providing weapons and funding to ISIS — and proposes to cut that off rather than fueling the fire with more weapons and attacks.

Corbyn is even opposed to the steady buildup of hostility toward Russia, and faults NATO for expanding and the West for creating the crisis in Ukraine. He doesn’t excuse actual misdeeds by Russia, but faults U.S. and European aggression and hypocrisy.

And, though this may be difficult for Americans to imagine, Corbyn opposes the mass slaughter of Palestinians by Israel.

Hours after being elected leader of the Labour Party, Corbyn spoke on Saturday at a huge pro-refugee rally in Parliament Square, and blamed the refugee crisis on its cause, declaring that he would not support the past policy of rushing about the world launching wars.

Americans have come to believe that politicians who support, promote, tolerate, or fund wars can be “war critics” by proposing various tweaks to the war machine.

Bernie Sanders focuses on money issues, taxing the rich, spending on the poor, but has thus far been permitted to engage in the general practice of speaking only about the 46% of federal discretionary spending that it not military. Nobody has asked him about the 54% that by the calculation of National Priorities Project is military. Nobody has asked him if Eisenhower was right that military spending produces wars. Here are 25,000 people who want to know whether and how much Sanders would want to cut military spending.

Sanders is silent on the public support for two, not one, great sources of revenue: taxing the rich (which he’s all over) and cutting the military (which he avoids). When he is asked about wars and says Saudi Arabia should pay for and lead them, nobody has followed up by asking whether the wars are themselves good or not or how the theocratic murderous regime in Saudi Arabia which openly seeks to overthrow other governments and is dropping US cluster bombs on Yemen will transform the wars into forces for good. Since when is THAT “socialism”?

If you go to Bernie’s website and click on ISSUES and search for foreign policy it’s just not there. In the United States, candidates for high office are permitted to just be silent on how much they’d cut the military, even within a range of $100 billion. Does Sanders, or do any of the other candidates, favor $45 billion in more free weapons for Israel paid for by the U.S. public whom Sanders usually wants to spare lesser expenses than that? Who knows.

Jeremy Corbyn just won leadership of the Labour Party by promoting socialism at home and abroad. What are we yanks afraid of?