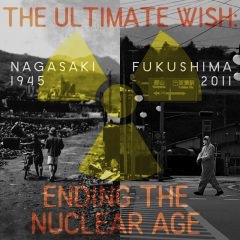 We’ve managed to outgrow or to come within sight of outgrowing cannibalism, slavery, blood feuds, duels, capital punishment, child labor, tar and feathering, the stocks and pillory, wives as chattel, the punishment of homosexuality, and listening to Rush Limbaugh.  To various degrees, these practices — and many others — have been eliminated or reduced and stigmatized.

While the stupidest practice ever created — the mass killing known as war — remains, we’ve seen most of the world ban poison gas, land mines, cluster bombs, biological weapons, depleted uranium, napalm, white phosphorous, and other disgusting weaponry.  But the worst weapon of all remains, and the treaty requiring its reduction and elimination is completely ignored.

We’ve begun learning to avoid long-lasting environmental damage.  We try not to poison our fruit trees or our grass or our rivers.  But when it comes to damage that lasts longer than humanity has existed, we go right on producing it.  And in so doing, we contribute to a slowly building crisis that could soon slip out of humanity’s control and eventually remove humanity from existence.  Meanwhile, Pandora’s Propaganda tells us that nuclear energy — the same stuff that proliferates the weaponry — will help the earth’s climate rather than hurting it.

Uh huh.  And blood-letting and lobotomy will heal what ails you.

Except that they won’t.  And we’ve come to admit and accept that and to move on.  We don’t fund lobotomies.  Why must we fund nuclear energy?  And don’t say: because television can replace lobotomies but will never reproduce Fukushima.

August is Nuclear Free Future Month.  Take a look at what Fukushima is like two years after.  Here’s a hint: its former residents have to visit it by Youtube too.

Here’s something you can do to help: Set up a screening of this new film: The Ultimate Wish: Ending the Nuclear Age.

The Ultimate Wish is the wish for a world without nukes.  This is a film that connects Fukushima to Hiroshima and Nagasaki.  Here we watch a survivor of Nagasaki meet a survivor of Auschwitz.  And it strikes us with crystalline clarity that they are both victims of incredible stupidity and cruelty.  We completely set aside the fact that the holocaust was created by bad German lies about a master race while the dropping of the bombs was created by good U.S. lies about ending World War II and starting the Cold War.  The politics fades, and we’re left with the human species treating itself as even ants would never treat their fellow ants.

In The Ultimate Wish, produced by Robert Richter and Kathleen Sullivan, we see nuclear survivors in classrooms speaking with young people.  One teacher asks the students to close their eyes.  She drops a single ball bearing into a metal pan, the noise meant to represent all the bombs of World War II, all the bullets, all the grenades, even the two nuclear bombs.  Then, to represent the nuclear weapons now in existence, she dumps a whole noisy bag of ball bearings.

A large coalition has issued the following appeal:

Do you want to reach thousands on August 9 with our message on the need for the Obama administration to engage in multilateral negotiations now for a nuclear free future?

Then join our Thunderclap. Watch a brief video and learn about how a Thunderclap works.

Thousands will see the message below on all of our Facebook pages and Twitter accounts on August 9 at 11:02 a.m., the time the bomb was dropped on Nagasaki:

And on August 9 the message will automatically be sent to all your friends and supporters.

Not a bad idea, huh?  Try to reach some of your non-friends and non-supporters too.

UPDATE: Link for the film: http://www.newday.com/films/The_Ultimate_Wish.html