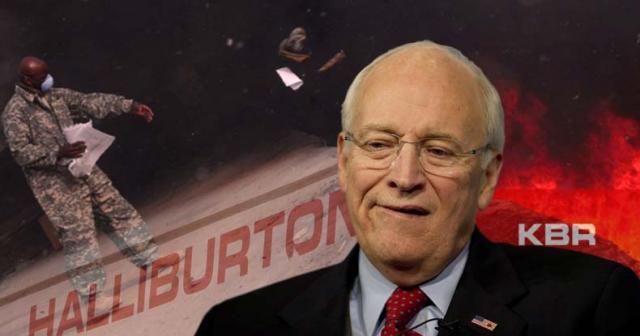 The U.S. government, from Dick Cheney to Hillary Clinton, told blatant lies about the Iraqi government creating chemical, biological, and nuclear weapons in 2002, despite having been informed of the fact that Iraq was doing no such thing. U.S. leaders lied about ties between Iraq and terrorists that they also knew did not exist.

Then the U.S. military attacked and invaded Iraq, in the process heavily bombing old sites of Iraqi chemical weapons from the 1980s, many of those weapons having been provided by the United States. In large part because of the U.S. origin of the old Iraqi chemical weapons, the U.S. kept quiet about them during the new war. Another reason for the official silence was that, during the 2003 U.S. destruction of Iraq, many of those old weapons were seized by fledgling terrorist groups. The war had done exactly what it had been justified as being needed to prevent; it had given WMDs to terrorists.

The geniuses running the U.S. military set up U.S. bases at the sites of old chemical weapons piles, dug giant burn pits into the ground, and began burning the military’s trash — monumental quantities of trash, something like The Story of Stuff on steroids. They burned hundreds of tons of trash every day, including everything you can think of: oil, rubber, tires, treated wood, medicines, pesticides, asbestos, plastic, explosives, paint, human body parts, and . . . (wait for it) . . . nuclear, biological, and chemical decontamination materials.

The burn pits poisoned Iraq, together with depleted uranium weapons, napalm, white phosphorous, and various other horrors, creating unprecedented epidemics of birth defects, and killing untold masses of Iraqis. The burn pits also poisoned tens of thousands of U.S. troops, many of whom have died as a result, including very likely the son of the current U.S. vice president. The burn pits profited Halliburton, the company of the previous U.S. vice president.

The burn pits were no secret, although bases sometimes stopped the burning during VIP tours. Typically, huge clouds of smoke filled the air and created immediate breathing difficulties and sicknesses. Soldiers knew which colors of smoke were most dangerous and discussed it as they discussed an enemy. Numerous burn pits turned hundreds of previously healthy U.S. troops into invalids. But the burn pits at six particular bases caused the most severe illnesses and the most deaths. They caused, among other things, numerous cases of constrictive bronchiolitis, which could only have resulted from exposure to mustard gas — a chemical weapon left over from a program the United States had supported when it existed and used as an excuse for war when it didn’t.

I’m reminded of a ship that sits at the bottom of the Mediterranean. In 1943, German bombs sank a U.S. ship at Bari, Italy, that was secretly carrying a million pounds of mustard gas. Many of the U.S. sailors died from the poison, which the United States dishonestly claimed to have been using as a “deterrent,” despite keeping it secret. The ship is expected to continue leaking the gas into the sea for centuries. The earth and water of Iraq have been similarly poisoned, as have U.S. soldiers.

The Pentagon made crystal clear in Iraq, as most everywhere else, that it cares not a damn for the people or the natural environment of the places it attacks, and that it cares even less for the troops it uses to do so. But if you imagine that the Pentagon has reserved its concern for the civilian inhabitants of the Fatherland, don’t look too closely into the open-air burns still happening in the United States. The U.S. military is the third-largest polluter of U.S. waterways, top producer of superfund disaster sites, and top consumer of petroleum. At least 33,480 U.S. nuclear weapons workers who have received compensation for health damage are now dead. Where it is blocked by legal regulations effectively enforced, the military shows restraint; where it isn’t, it doesn’t. In Virginia, the military very responsibly throws dead soldiers into a landfill rather then burning them. Either method communicates equally well just how much the military cares.

Halliburton, for its part, is as happy to deal death at home as abroad. Residents of Duncan, Oklahoma, have sued Cheney’s cash machine for poisoning the ground water with  ammonium perchlorate. Government investigators also concluded that Halliburton was, in part, to blame for the BP oil spill that flooded into the Gulf of Mexico in 2010.

Joseph Hickman’s new book, The Burn Pits: The Poisoning of America’s Soldiers, collects the evidence, including from similar incidents during the first Gulf War that were known before the first 2003 burn pit was dug and lit. Hickman gives us stories of young healthy men who headed off to Iraq believing the lies, believing that the U.S. government that is now begging Russia to stop attacking terrorists because the U.S. wants to overthrow yet another government — believing that this U.S. government had good intentions in attacking Iraq. These poor souls went to Iraq hoping to protect people from horrible suffering, and ended up inflicting horrible suffering on people including themselves. They come home, develop cancer, get stonewalled by the VA, and die dreaming of what it might have been to have health and the wealth needed to attend college. Their American Dream was cut short by the militarized American Fantasy.

Joe Biden supported a war that very likely killed his son by means of burn pits. He then chose not to run for president because of his grief. His decision not to run received more media coverage than several months of the campaign of Senator Bernie Sanders who had voted against the war. But did Biden lift a finger to hold Halliburton or the military or the Congress accountable? Not that I’ve heard.

Hickman describes the burn pits, and analogous poisons from past wars like Agent Orange in Vietnam, as “recklessly endangering the health of our fighting men and women.” The only trouble with this is the fact that all war, all “fighting,” consists of recklessly endangering the lives of the vast bulk of the victims (the Vietnamese, Iraqis, etc.) and of the U.S. troops. There’s nothing non-reckless about any war. Perhaps distant drone pilots are not endangered in the typical way, but then look at how they’re mocked within the Air Force. If troops weren’t endangered, people wouldn’t treat them with reverence and describe them — as Hickman does — as somehow “serving” their country, even while the facts he includes in his book speak otherwise.

The U.S. Supreme Court has held since 1950 that members and former members of the military cannot sue over injuries received on the job. It may, however, still prove possible to win compensation from Halliburton. If so, you can probably chalk up another assist to Chelsea Manning who leaked evidence that the military had knowledge of the dangers when it created the burn pits, knowledge that General David Petraeus blatantly lied about in response to a Congressional inquiry.

It now appears that the 2003- war on Iraq not only created ISIS, but armed it with mustard gas, thereby proving, I guess, that Saddam Hussein could indeed had given WMDs to terrorists had he just been as evil as the U.S. military.

David Swanson is an author, activist, journalist, and radio host. He is director of WorldBeyondWar.org and campaign coordinator for RootsAction.org. Swanson’s books include War Is A Lie.

4 Replies to “More U.S. troops killed by Halliburton than by Iraqis”