The Guardian on Monday made public a CIA document allowing the agency’s director to “approve, modify, or disapprove all proposals pertaining to human subject research.”

At Guantanamo, the CIA gave huge doses of the terror-inducing drug mefloquine to prisoners without their consent, as well as the supposed truth serum scopolamine. Former Guantanamo guard Joseph Hickman has documented the CIA’s torturing people, sometimes to death, and can find no explanation other than research:

“[Why] were men of little or no value kept under these conditions, and even repeatedly interrogated, months or years after they’d been taken into custody? Even if they’d had any intelligence when they came in, what relevance would it have years later? . . . One answer seemed to lie in the description that Major Generals [Michael] Dunlavey and [Geoffrey] Miller both applied to Gitmo. They called it ‘America’s battle lab.'”

Non-consensual experimentation on institutionalized children and adults was common in the United States before, during, and even more so after the U.S. and its allies prosecuted Nazis for the practice in 1947, sentencing many to prison and seven to be hanged. The tribunal created the Nuremberg Code, standards for medical practice that were immediately ignored back home. Some American doctors considered it “a good code for barbarians.”

The code begins: “Required is the voluntary, well-informed, understanding consent of the human subject in a full legal capacity.” A similar requirement is included in the CIA’s rules, but has not been followed, even as doctors have assisted with such torture techniques as waterboarding.

Thus far, the United States has never really accepted the Nuremberg Code. While the code was being created, the U.S. was giving people syphilis in Guatemala. It did the same at Tuskegee. Also during the Nuremberg trial, children at the Pennhurst school in southeastern Pennsylvania were given hepatitis-laced feces to eat.

Other sites of experimentation scandals have included the Jewish Chronic Disease Hospital in Brooklyn, the Willowbrook State School on Staten Island, and Holmesburg Prison in Philadelphia. And, of course, the CIA’s Project MKUltra (1953-1973) was a smorgasbord of human experimentation. Forced sterilizations of women in California prisons have not ended. Torture by Chicago police has for the first time just resulted in compensation for victims.

If we are, at long last, to put such contemptible behavior behind us, it will require breaking some bad habits.

Congress has busily re-banned torture a number of times in recent years. Now it must drop that charade and instead demand that the Attorney General enforce the anti-torture statute, which made torture a felony before George W. Bush ever became president.

It’s good of John Oliver to denounce torture. And he’s right to go after the lies told about torture in popular entertainment. But he’s also spreading the false idea that it’s legal. “We checked,” he says, reporting that his crack team of investigators discovered that the only ban on torture is found in an executive order written by President Obama. This is dangerous nonsense. The U.S. was a party to the Anti-Torture Convention and had made torture a felony under the anti-torture statute and the war-crimes statute before George W. Bush ever became president.

Since then, Congress has repeatedly “banned” torture. But, just as the U.N. Charter’s ban on war actually legalized certain wars, purporting to replace the total ban in the Kellogg-Briand Pact with a partial ban, these Congressional efforts (such as the Military Commissions Act of 2006) have actually legalized certain cases of torture, replacing (at least in everyone’s mind) the total ban already existing in the U.S. Code and in a treaty to which the U.S. is party.

The latest “ban” proposal from Senator McCain and friends, would create exceptions in the form of those in the Army Field Manual, and advocates maintain that step number two would be to reform that manual. But if you skip both steps and acknowledge the existence of the anti-torture statute in the U.S. Code, you’re done. The proper task is to press for its enforcement.

Oliver’s mistake, like virtually everyone else’s, is based on two myths. One, torture began with Bush. Two, torture ended with Bush. On the contrary, torture has been around in the United States and elsewhere for a very long time. So has the practice of banning it. Torture is prohibited by the Eighth Amendment to the U.S. Constitution, the Universal Declaration of Human Rights, and the International Covenant on Civil and Political Rights, as well as the Convention Against Torture and Other Cruel Inhuman or Degrading Treatment or Punishment. In fact, under international law, torture can never be legalized and is always banned.

Myth number two is also wrong. Torture has not ended and won’t as long as it’s not punished.

An attorney general can be questioned and threatened with impeachment until our laws are enforced. A new website created Monday let’s you email Congress to demand that it do just that. 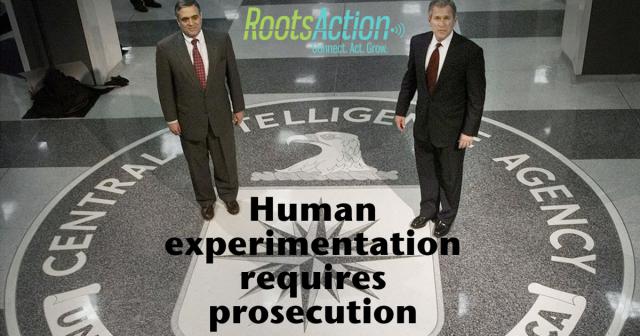