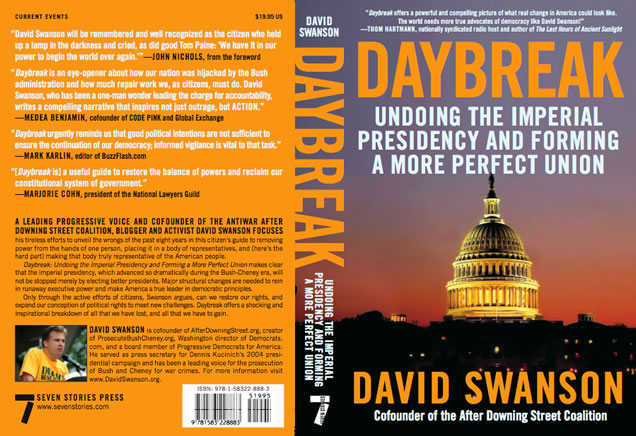 The publisher is Seven Stories Press. Seven Stories is distributed by Consortium, which all bookstores can order through. Arrange to review my first book DAYBREAK on your website, blog, or publication and Seven Stories will get you a free copy. Contact crystal at sevenstories dot com.

Here’s a press release in PDF and Word.  Photos of the author are here.

Here’s a 60-second audio PSA or advertisement that radio stations can play: WAV.

This book has been kindly promoted by Democrats.com, American Freedom Campaign, OpEdNews, Black Agenda Report, The Public Record, Progressive Democrats of America, The Urban Journal, The People Speak Radio, Bill of Rights Defense Committee, BuzzFlash, Velvet Revolution, Media Channel, the Backbone Campaign, (Post a graphic link or a review on your site and get listed here.)

BOOK TOPIC: Daybreak is a prescription for political reform that literally ends with a to-do list for citizens, and draws inspiration from the misdeeds and missteps of the Bush and Obama presidencies. What powers were stripped from Congress and handed to the White House while George W. Bush lived there, and what would it take to permanently move them back? Which of these powers is Barack Obama making use of or even expanding upon? And in the future, how can we expand our rights, create democratic representation in Congress, and make presidents into executives rather than emperors? This is a citizens’ guide to the long-term task of removing power from the hands of one person, placing it in a body of representatives, and (here’s the hard part) making that body truly representative of the American people. Swanson’s analysis makes clear that the imperial presidency, which advanced so dramatically during the Bush-Cheney era, will not be stopped merely by electing better presidents. Major structural changes are needed in our system of government to rein in both the imperial presidency and, at the same time, the presidential empire. Only through the active efforts of citizens, Swanson argues, can we restore and protect our rights, and expand our conception of political rights to meet new challenges.

AUTHOR BIO: David Swanson is the author of the new bestselling book “Daybreak: Undoing the Imperial Presidency and Forming a More Perfect Union” by Seven Stories Press and of the introduction to “The 35 Articles of Impeachment and the Case for Prosecuting George W. Bush” published by Feral House and available at Amazon.com. Swanson holds a master’s degree in philosophy from the University of Virginia. He has worked as a newspaper reporter and as a communications director, with jobs including press secretary for Dennis Kucinich’s 2004 presidential campaign, media coordinator for the International Labor Communications Association, and three years as communications coordinator for ACORN, the Association of Community Organizations for Reform Now. Swanson is Co-Founder of AfterDowningStreet.org, creator of ConvictBushCheney.org and Washington Director of Democrats.com, a board member of Progressive Democrats of America, the Backbone Campaign, and Voters for Peace. Full bio here.

PRAISE: “David Swanson’s Daybreak impressively exposes all the ways our government has changed for the worse under the Bush administration, and makes clear that we need to do far more than elect a new president to see our tattered Democracy restored.” — Vincent Bugliosi, author, former federal prosecutor

“Daybreak offers a powerful and compelling picture of what real change in America could look like. The world needs more true advocates of democracy like David Swanson!” — Thom Hartmann, Author, The Last Hours of Ancient Sunlight

“David Swanson’s masterful exposure of the emergence of a monarch-like president coupled with an effete, irresponsible, and constitutionally ignorant Congress is well worth the price of admission. An aroused public with a litmus test of honoring the Constitution is urgently needed to prevent the Republic from capsizing.” — Bruce Fein, Associate Deputy Attorney General under President Reagan

“Daybreak is an eyeopener about how our nation was hijacked by the Bush administration and how much repair work we, as citizens, must do. David Swanson, who has been a one-man wonder leading the charge for accountability, writes a compelling narrative that inspires not just outrage, but ACTION.” —Medea Benjamin, CoFounder of Code Pink and Global Exchange

“David Swanson is the most thoughtful, determined, and energetic progressive activist in America, and one of the most important voices of his generation. He’s also a unique bridge between traditional real-world organizing and the brand new world of online activism. His combination of cheerful organizing, passionate speaking, and brilliant blogging is an inspiration to everyone who craves a more just, peaceful, and sustainable world.” — Bob Fertik, President of Democrats.com

“In this important book, David Swanson carefully documents the myriad ways in which Bush-Cheney has amassed unprecedented imperial power, while Congress has abdicated its constitutional duty to check and balance the executive. A useful guide to restore the balance of powers and reclaim our constitutional system of government.” — Marjorie Cohn, President of National Lawyers Guild

“Our times cry out for a smart, witty and courageous Populist who hasn’t forgotten how to play offense. Luckily we have David Swanson.” — Mike Ferner, National President of Veterans For Peace, author of “Inside the Red Zone: A Veteran For Peace Reports from Iraq.”

“Swanson has been an indefatigable commentator and activist tirelessly advocating for the dismantling of the imperial presidency and the restoration of the principles of our Constitution. His energy and passion are infectious, as is his cogent reasoning. ‘Daybreak’ urgently reminds us that good political intentions are not sufficient to ensure the continuation of our democracy; informed vigilance is vital to that task.” — Mark Karlin, Editor and Publisher, BuzzFlash.com

“If Tom Jefferson were with us today, he would be saying that we still must burst the chains of monkish ignorance and superstition and break the bindings that strangle our liberty. But Jefferson – like Paine – is gone. So it falls to another from Virginia to sound the signal for a rising on behalf of the republic and our own freedom. That man is David Swanson, and this remarkable book is his – and America’s – call to arms.” — John Nichols, from the Introduction

“David Swanson writes faster than anyone I know, and is always worth reading. He wields a wicked pen (well, technically a wicked keyboard), a la Swift or Twain. He thinks with precision and intelligence, with the powerful logic of an undefeated chess-playing computer program. He is fearless, speaking truth to both power all the time. He bears daily witness to the decomposition of our would-be democracy, and he carries that same crusading spirit into this book. Read it. Buy it for your friends, especially your younger ones. Get together and argue about it. Ask John Stewart and Stephen Colbert to have him on their shows. Because a better world is still possible, and to get there, a more democratic America is necessary.” — Steve Cobble

“There have now been many books written which chronicle the imperial, lawless presidency of the Bush era, but Swanson’s superb new book — Daybreak: Undoing the Imperial Presidency and Forming a More Perfect Union — is one of the very few to examine how we can recover from it and reverse its pernicious trends. Many Bush books, given the horrific subject matter, have been dark and gloomy, even somewhat depressing.  To be sure, there are parts of Swanson’s book that documents in gruesome detail all of the liberties abridged and damage done during the last eight years.  This book also does not shy away from highlighting those areas in which the Obama presidency has, much to the dismay of many, come to replicate some (though by no means all) of the worst Bush abuses.  But Daybreak is far more uplifting and inspiring than virtually any other book in its genre, as it devotes itself to laying out a detailed plan for how American citizens — through the activism to which he has devoted himself — can bring about a rejuvenation of our political values.” — Glenn Greenwald